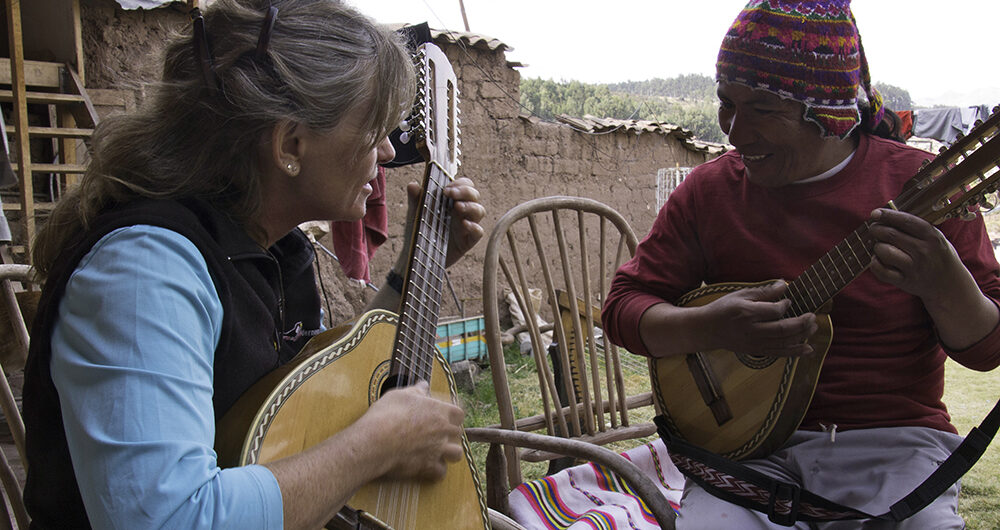 Holl Wissler, an ethnomusicologist, is one of Aracari’s specialist guides in Peru. Her academic research and wealth of experience in remote Andean communities puts her in a privileged position to share unique insight into rural andean life and the role of music in these communities.

The importance of music in Andean Culture

Music has always played a key role in Andean culture, long before the Incas, and it continues to retain its importance even today in the communities of Peru, though traditional cultural practices have been lost in many places. The community of Q’eros located in the Paucartambo province, about 160 kilometres (100 miles) northeast of the city of Cusco, has managed to retain many of their traditions like weaving, music and spiritual rituals. Because of their location in a region with three distinct ecological zones, the Q’eros people have been able to remain self-sufficient, and thus, have maintained these traditions with little influence from outside culture. Even so, there exists the risk that younger generations will lose their cultural traditions in favor of modern culture, which they encounter during visits to the city of Cusco.

Holly Wissler, originally from Iowa, began living and working with the Q’eros community in 2003 after having spent over two decades as a travel tour guide in the southern Andes of Peru. With a master’s degree in performance flute and a PhD in ethnomusicology, Holly’s background has allowed her to connect to these Andean peoples through the expression that moves them most: music.

Preserving the musical heritage of the Q’eros

Accustomed to giving lectures for various universities, Holly has brought the music of the Andes to the rest of the world and has also returned 50 years of musical recordings, documentaries and publications (hers and that of others) to the Q’eros. In this effort to preserve their rich musical heritage and the history that the songs convey, Holly continues to collaborate with the Q’eros on recording projects and performances. You can get a glimpse her work in Q’eros in this video.

Holly is a guest lecturer for National Geographic, The Center for World Music and various U.S. University study abroad programs, and she has a Suzuki Flute studio with the Suzuki Association of Peru in Cusco. Fluent in Spanish and Quechua, Holly also works with the Harakmbut Wachiperi group north of Q’eros in the Madre de Dios region of the Amazon. She has produced two documentaries, Qoyllur Rit’i: A Woman’s Journey (1998), about the largest pilgrimage festival in the Peruvian Andes and Kusisqa Waqashayku (“From Grief and Joy We Sing,” 2007) about the Q’eros musical rituals. She often lectures on the Inca Empire and Andean culture with a focus, obviously, on their musical and spiritual traditions. The cosmovision that binds the Andean people to the land through worship of the apus (mountain spirits) and the pachamama (mother earth) is a vital element to understanding the cultural traditions of the Quechuas and the Incas. These pre-Hispanic cultures did not rely on the written word to carry history but rather, an oral tradition, spoken word and especially song to pass their history on to future generations.

Meeting members of the Q’eros Community

Living and working with the Q’eros people, Holly has deep ties with the community. Holly is often invited by universities and groups to  share her insights from her first-hand experience with the Q’eros, and she will even invite members of the Q’eros community to join her. During her talks Holly focuses on one of several topics, for example, the rise and fall of the Inca Empire and current Andean culture, highlighting the importance of their cosmovision and its role in the culture, including music. Holly also speaks about Andean musical traditions as they were and continue to be extremely important to the culture. She shares clips from her documentary, Kusisqa Waqashayku (“From Grief and Joy We Sing,” 2007), and offers a demonstration on the siku, panpipes from the Lake Titicaca region. In addition to her extensive knowledge and experience, Holly’s enthusiasm and dedication to the Andean culture is palpable, transforming these talks into an experience that opens listeners to a deeper understanding and connection to the Andean peoples.

Check out Holly Wissler’s informative website to learn more about her work and contact us if you’re interested in a tailormade trip to Peru and the opportunity to meet with Holly.

Kevin Floerke, Aracari Specialist Aracari is thrilled to introduce you to our photography and archaeology specialist, Kevin Floerke. With 9 years of experience working in Peru, Kevin i...
Stephanie Borios, Aracari Specialist Stephanie Borios is a French ethno-botonist who was trained in the UK and the US, and currently resides in Lima, Peru. She is an Aracari specialist in...
The Best Easter Celebrations in Peru Aracari is well versed in understanding Peru’s yearly calendar scattered with celebrations, and the Easter period is no exception. In fact, the days o...
Traditional Peruvian Art and Craft – Handmade in Peru One of Peru’s best kept secrets is the exquisite, handmade collectables produced here. From cotton to clay, the country is rich in raw materials and f...
The Best of Lima’s Historic Centre Lima, the capital of Peru, was once just a layover for hot-footed tourists on the way to Cuzco and a Machu Picchu luxury trip. Not anymore. You wouldn...
Ronald Elward on Finding the Inca Descendants Ronald Elward is a Dutch expat and one of Aracari's specialist guides in Lima, leading visitors to the capital on a historical city tour, which showca...
Tags: Peru Specialist guide
Previous postMATE Opens Permanent Collection of Works by Mario Testino
Next postPARC Art Fair in Lima’s Museum of Contemporary Art