Peru gastronomy. The Year of Quinoa

Quinoa, the so-called “mother grain of the Incas,” has become increasingly popular throughout the world, not only for its excellent nutritional value, but also for its versatility in the kitchen and overall tastiness. So much so that the United Nations officially declared 2013 as the International Year of Quinoa to “raise awareness of the nutritional, economic, environmental and cultural value of a food that has been traditionally cultivated for thousands of years.” The UN hopes that by launching this campaign people will learn about this superfood and recognize the indigenous Andean people who have maintained and preserved it as food for thousands of years. In addition, they feel that the grain can play an essential role in achieving the Millenium Development Goals, global anti-poverty targets, by increasing food production of nutritious foods like quinoa.

Quinoa is predominantly grown in and around the Andes, and Peru is currently one of the world’s largest producers and exporters of this superfood. However, the crop can easily adapt to various climates and locations, thriving in a wide range of temperatures and altitudes. Additionally, it is the only plant food to contain all of the essential amino acids for the human diet, its protein content is greater than that of wheat, rice, and oats, and it also happens to be gluten free. This versatility and remarkable nutritional value make it an excellent food option in areas with difficult farming conditions, with low amount of accessible animal proteins, and with high malnutrition rates.

Quinoa Salad on the Salkantay Lodge to Lodge Trek

The variety of flavors and textures make this versatile grain a delicious addition to a wide variety of dishes that you might already cook up! So why not celebrate the Year of Quinoa and incorporate it into some of your meals at home with this simple, but delicious recipe.

Directions
First, rinse quinoa thoroughly in a small strainer. Bring 3 cups of water to a boil. Put quinoa in water and reduce heat to simmer. Cover and cook until all water is absorbed (10-15 minutes). While the quinoa is cooking, halve your tomatoes and cut up your avocado and cilantro. Once the quinoa is cooked, drizzle w/ olive oil and honey and sprinkle with salt, pepper. Stir up the quinoa to release some heat and bring to room temp. Stir in avocado, tomato and cilantro, squeeze your citrus over this, toss and enjoy!

Guide to Peruvian food: Ceviche Peruvian ceviche The Pride of Peru Although many Latin American countries lay claim to ceviche, I'm going to remain unashamedly biased, and uphold P...
The Top Peru Culinary Tour Experiences  Peru is recognized as one of the world's top culinary destinations thanks to an almost unbeatable variety of ingredients as a result of such diverse c...
Astrid y Gastón: One of the Best Restaurants in Lima Peru Lima, Peru is often referred to as the culinary capital of Latin America thanks to its selection of the top restaurants in the region, and three of th...
The Best Restaurants Arequipa Peru is the food mecca of South America, proudly laying claim to a selection of the best restaurants in the world and the #1 restaurant in Latin Ameri...
Happy National Ceviche Day! National Ceviche Day The first dish that comes to mind when most people think of Peruvian cuisine is ceviche...and for good reason.  A source of prid...
Maria Julia Raffo – Peru Gastronomy Expert Culinary Travel in Peru Aracari’s Peru Gastronomy expert and PR advisor, Maria Julia Raffo, tells her part of the Aracari story. She shares what it's...
Tags: food in Peru Gastronomy in Peru
Previous postLake Titicaca’s Hidden Gem: A Visit to Suasi Island
Next postThe Ship, The Lady, and the Lake: Meriel Larken’s Captivating Tale of the Yavari Steamship 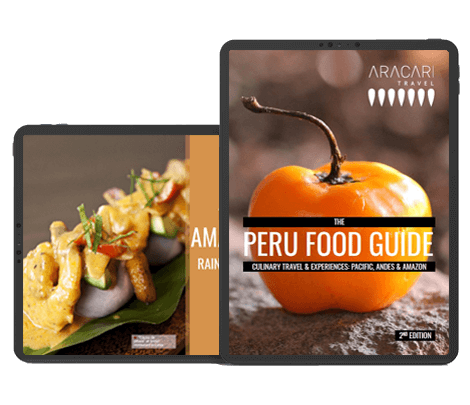 Download our free ebook, the Peru Food Guide, the perfect resource for the the most of Peruvian Cuisine during your travels.