Native to the mountains of South America that give the bird its name, the Andean condor can be spotted across the continent but arguably the best place to see these strikingly large animals is in the Colca Canyon of Peru. Located in the south of the country about a 4-hour drive from Arequipa, the Colca region is known for its dramatic landscapes, history, vibrant rural culture, and native condors. Aracari arranges private, tailormade trips to Arequipa and Colca where you can spot the majestic Colca Canyon condors! 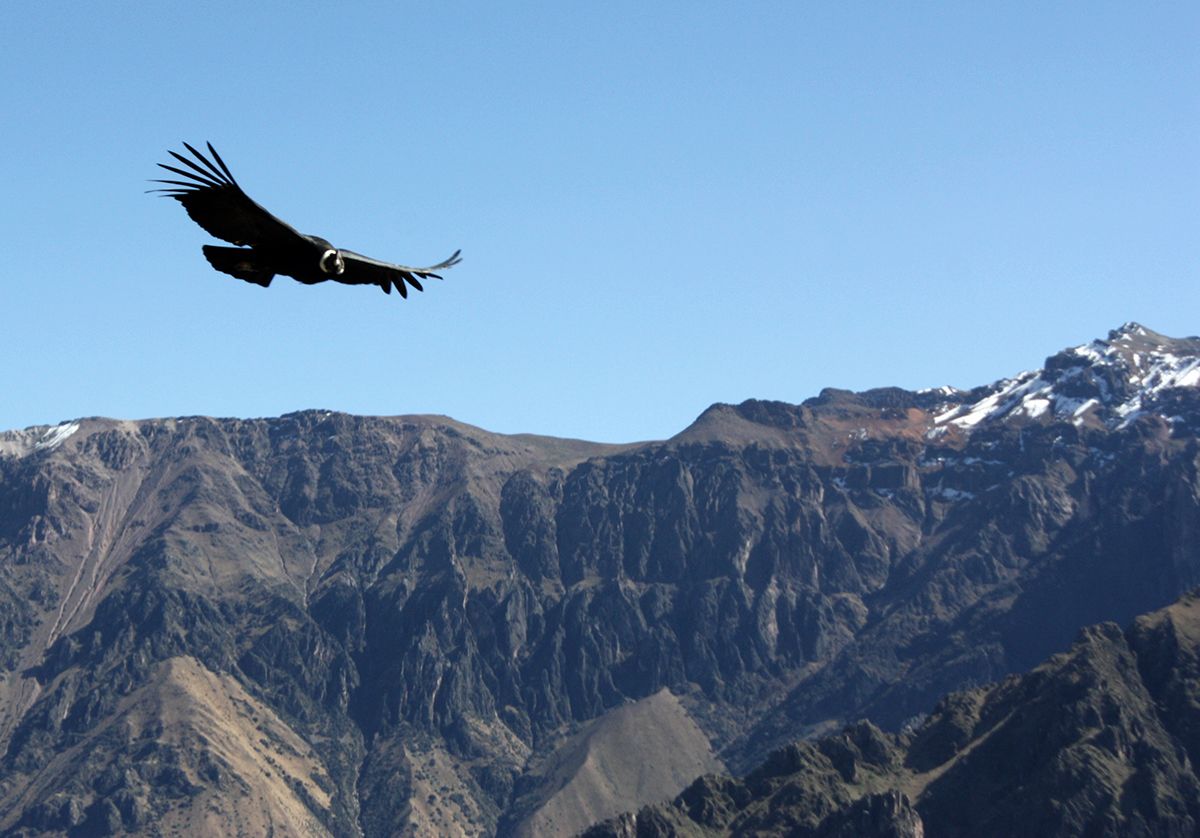 The Andean condor, which has been the focus of international conservation efforts, is one of the largest land flying birds in the world with an average wingspan of 3m (10ft). The animals are very heavy, weighing up to 15kg (33lbs) so to help keep them in the air they like to live in windy areas. The rising winds in the Colca Canyon and valley are strong, which makes it one of the best homes for the animal and in turn one of the best places to bird-watch for them! The spectacular condor takes advantage of the windy Colca region to glide up and down this imposing and magic corner of the Andean Cordillera – it is truly a sight to be seen.

Where to See Colca Canyon Condors

Between the small villages of Maca and Cabanaconde, where winds are strongest, is the Cruz del Condor or ‘Condor Cross,’ an observation point where visitors scan the skies for a glimpse of the majestic birds soaring in pairs in the early morning or late afternoon. Condor Cross is the place with the highest chance of condor spottings, with birds often seen at close range. As the birds soar past the canyon walls, the lookout point also offers breath-taking views down into the depths of the canyons. Here at Condor Cross you can optionally take a gentle one-hour walk for magnificent valley views, as you wait to spot the famed Condors.

Although the Condor Cross is the best place to spot Condors, they are not confined only to this vantage point. Elsewhere in the Valley, Madrigal Chimpa Fortress, a pre-Inca military site that sits high above the Colca Valley (4,412m / 14,475ft), also offers a chance of spotting the Andean condor. To reach Madrigal Chimpa Fortress, you either need to take a steep trek or horse-ride to the summit, which gives a contrasting viewpoint of the Canyon to the Condor Cross look-out. Condors are not found here with the same abundance as the Condor Cross, but with some luck the 360 degree views from the lookout point of the trek may offer sightings of the bird circling above the canyon or valley – we spotted one swooping in relatively close range when we last hiked!

The smaller, lesser known Canocota Canyon is abound with flaura and fauna. A walk alongside the canyon’s river passes plenty of cactus and flowered bushes, and has the opportunity to see wildlife like the conejo mara, or large Andean rabbit, and the chance to spot the renowned Andean condor.

Travel on our Highlights of Southern Peru itinerary which includes condor spotting! 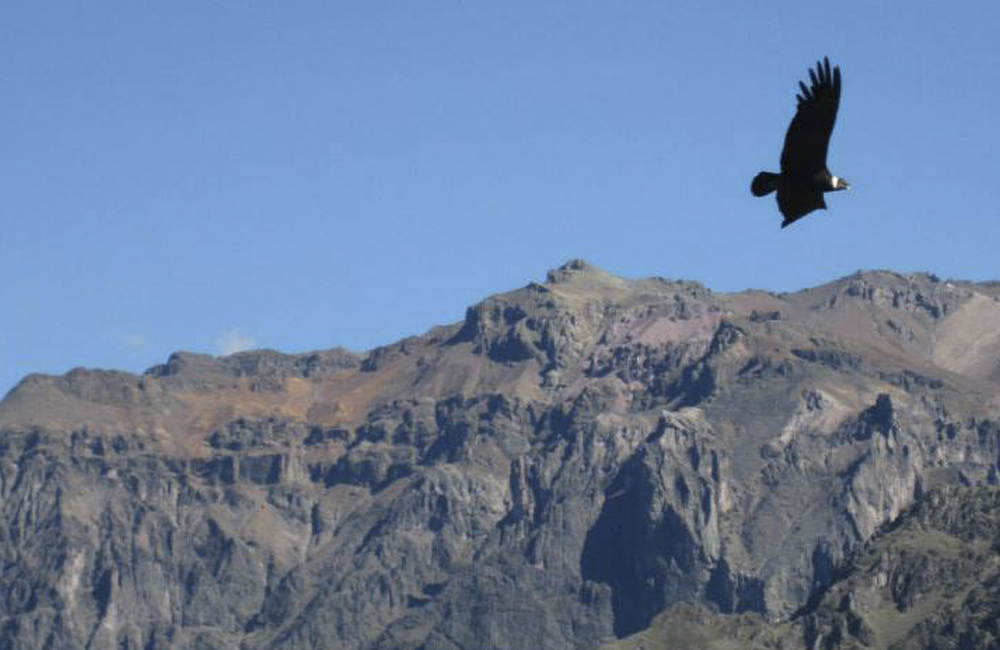 As with all wildlife observation, it is never guaranteed that you are going to spot the animal. This is the same for Colca Canyon condor watching, but as specialists in tailormade travel Peru, Aracari has tips for the best time of year and the best time of day to watch for condors.

There is a higher probability of spotting Andean condors during dry season, from April – November, than the rainy season, December-March, but the birds can be seen all year long. The most important part of condor watching isn’t based on season, but rather on time of day.

The Best Time of Day to See Colca Canyon Condors

There are relatively specific times of day that the Andean condor leaves its nest and is active. This is why the hour you visit the lookout has such an impact on your probability of spotting condors. The birds are typically seen soaring in the morning from around 8am-10am and in the late afternoon from 3:30pm-4:30pm.

It can never be predicted exactly how many Condors you will see, or how close, although the morning is generally regarded as slightly better for viewing them. That said, mass-tour groups only visit in the morning, so the Condor Cross sees the arrival of numerous tour buses. Therefore the advanatge of visiting in the afternoon is that you avoid the crowds but still should get to see Condors, for an overall superior, more tranquil experience.

Do not try and visit the Condor Cross in the middle of the day as you will almost definitely not see Condors! However we’ve also been at this time and it is the ideal time to go if you want to just sit and admire the Canyon view without a single other tourist in sight.

Avoiding the Crowds in Colca

All the mass tourists take the same route when visiting the Colca Canyon, following the left-hand side of the river and making stops at viewpoints along the valley until they reach the Cruz del Condor (Condor Cross) in the morning. Travelling with Aracari, we take you away from the crowds in the morning along the comparatively little-visited right hand side of the river during dry season, which runs from April-November, before crossing over the river to reach the Condor Cross to see Condors in the afternoon. This route takes in lesser-visited charming colonial villages, stopping at Lari to see the colonial church, before crossing at Maca to the right side of the river.

In dry season, we usually visit the Condor Cross in the afternoon, when there is high probability of seeing the birds — but there are significantly less tourists compared to the morning crowds.

In rainy season, December – March, we take travelers on the classic route on the left-hand side of the river in the morning, due to road conditions. Additionally, because the condors are more active in the mornings during rainy season, we make sure visitors head to the lookout early in the morning for a higher chance of condor sightings.

Contact us to start planning a luxury, tailormade trip to Peru including condor spotting in the Colca Canyon.

Natural Hot Springs Colca Thanks to the seismic activity of the region, the Colca Canyon and Valley are sprinkled with natural hot springs, or thermal baths, where locals and t...
Community Based Tourism Colca The Colca Valley is dotted with charming villages where the locals preserve the ethnic richness of their past more than any other region of Peru. Amon...
Romantic Honeymoon Destinations in Peru and the Galapagos Peru and the Galapagos are amongst the most perfect honeymoon destinations in the world. With romance, culture and adventure in abundance; there is so...
How to get to the Galapagos: Quito or Guayaquil? The Galapagos Islands almost always come up as one of the world's bucket-list destinations. Of course, as with any remote location, there is the matte...
The Best Horse Riding in Peru Peru is a country of diverse landscapes ranging from the jagged peaked Andes mountains, to the densely forested Amazon jungle. Though the distinct reg...
Two Day Lares Trek in Peru The Two Day Lares trek in Peru The two day Lares trek from Patakancha to Lares is a spectacular hike through the Peruvian Andes. One of the most popu...
Tags: adventure travel peru Colca Canyon Peru travel tips things to do in colca Wildlife in Peru
Previous postSanta Teresa Monastery with Director Franz Grupp
Next postNatural Hot Springs Colca