During my tour of Machu Picchu, our guide pointed to Huayna Picchu, the mountain that overlooks the citadel, and said, “Do you see those, little dots on the side of the mountain? Those are people climbing to the top. Not a hike for people with vertigo.”

I squinted to see them from where I stood and suddenly felt nervous about my climb scheduled for the following morning. It didn’t help when the guide mentioned the cords attached to the mountain walls for the parts that were nearly vertical or the uneven boulders at the peak that you had to balance atop to look over the edge. Coming from the city, I’m not much of a hiker and certainly not a mountain climber, so I knew that the following day would definitely be an adventure for me.

The next morning I woke up before the sun rose, ate a protein-packed breakfast and got one of the buses up to Machu Picchu. I was one of the 200 who would enter in the first time slot, between seven and eight in the morning. The second entry hour was at ten. There are a couple of ways to get to the entrance of Huayna Picchu, and all involve crossing  Machu Picchu, rewarding early risers with a privileged view of a largely empty citadel outlined by the sharp shadows of the new sun. 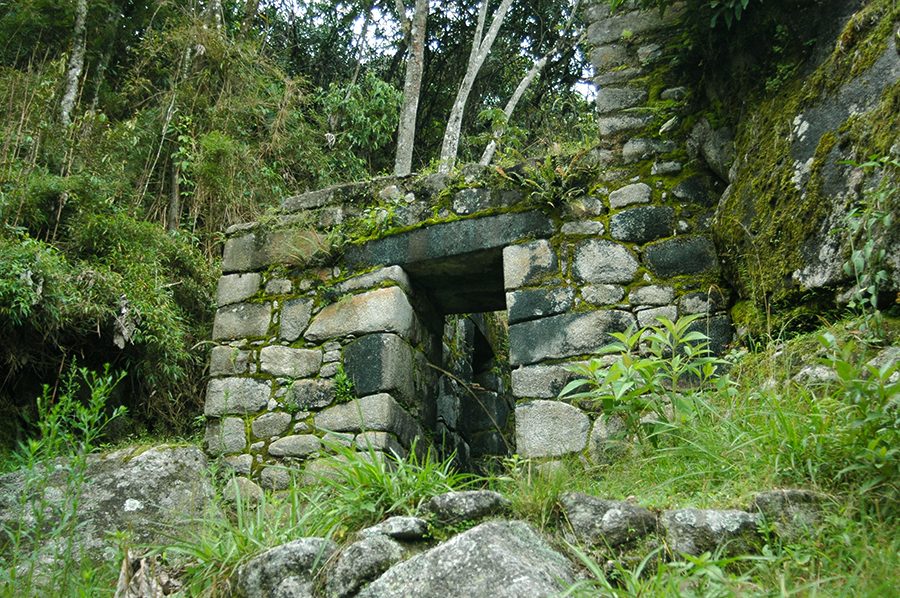 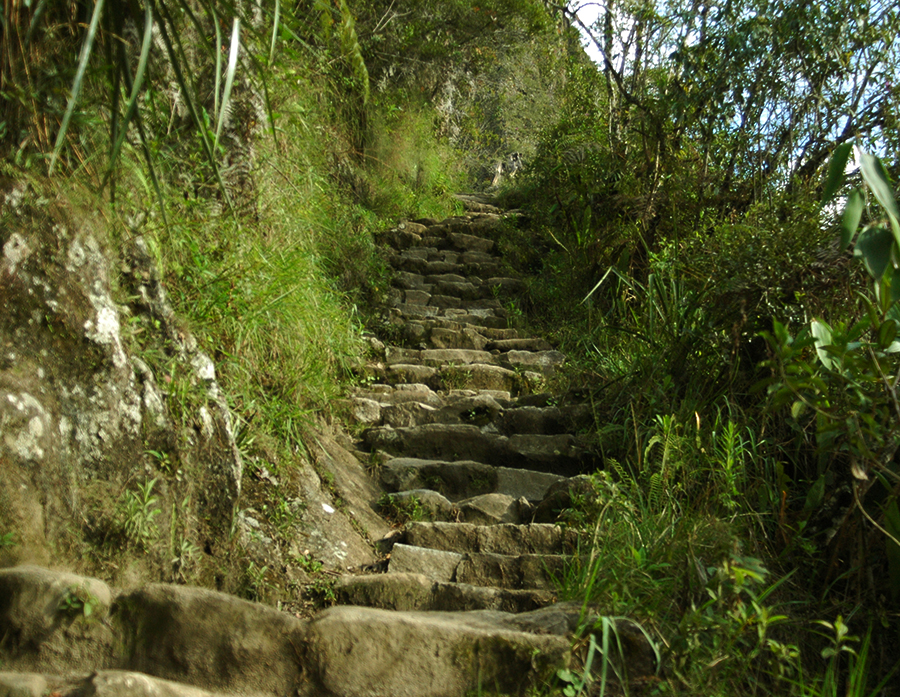 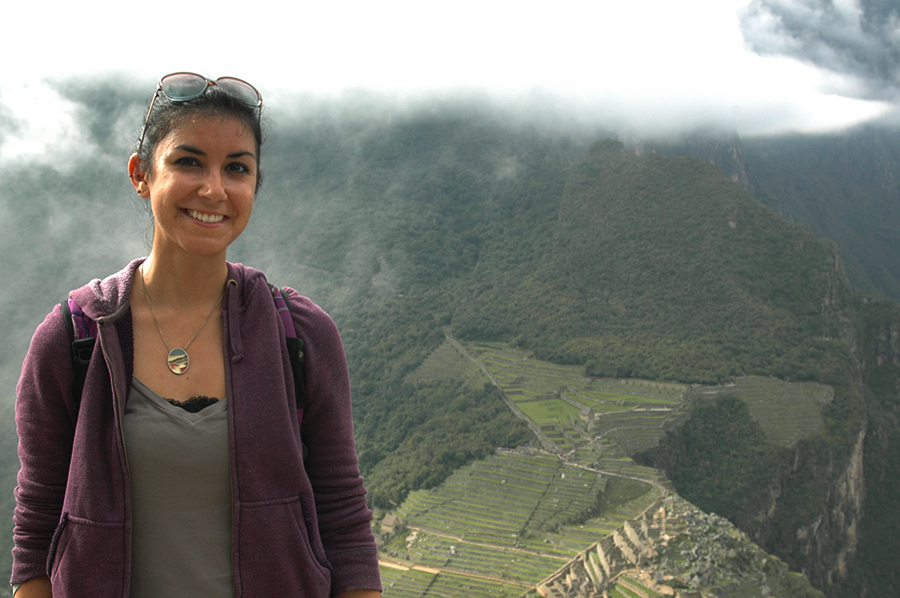 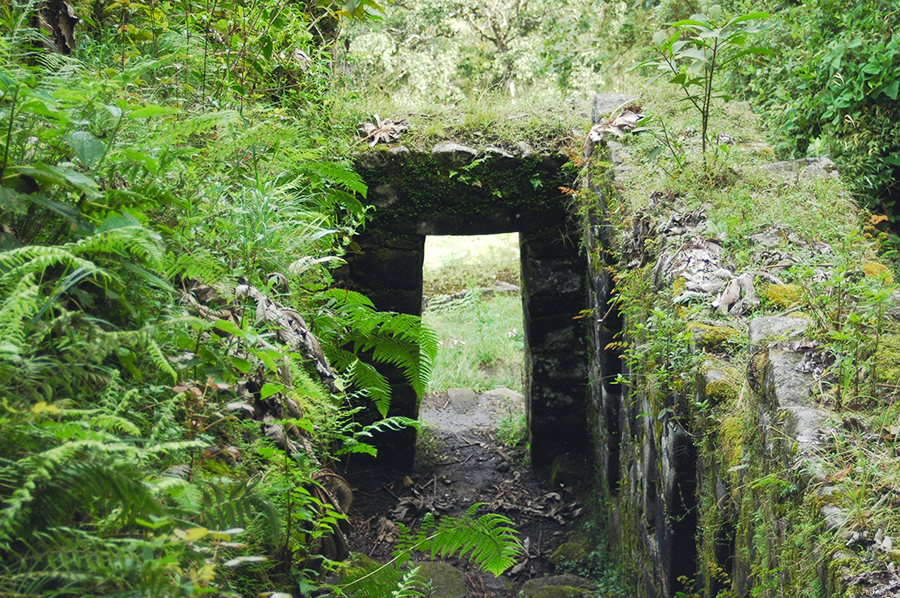 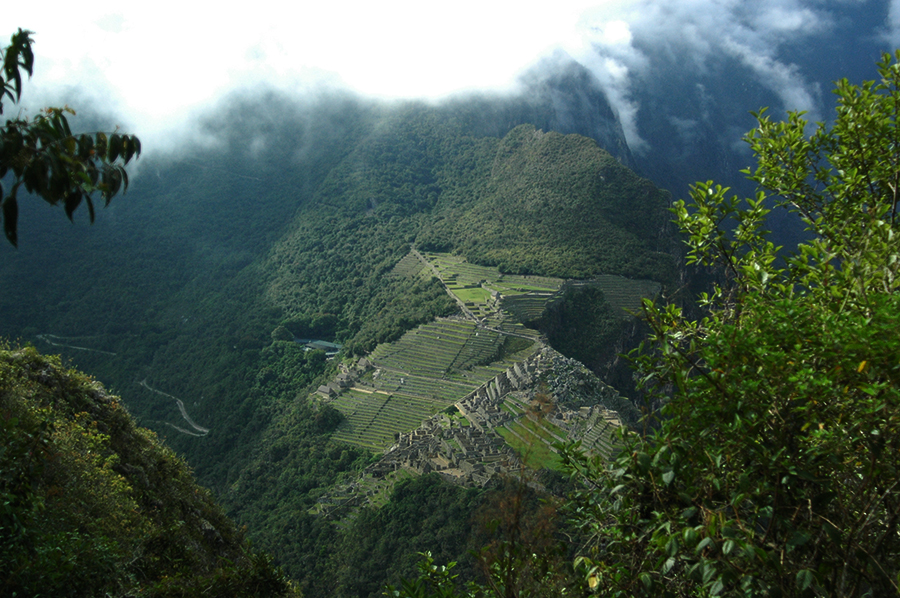 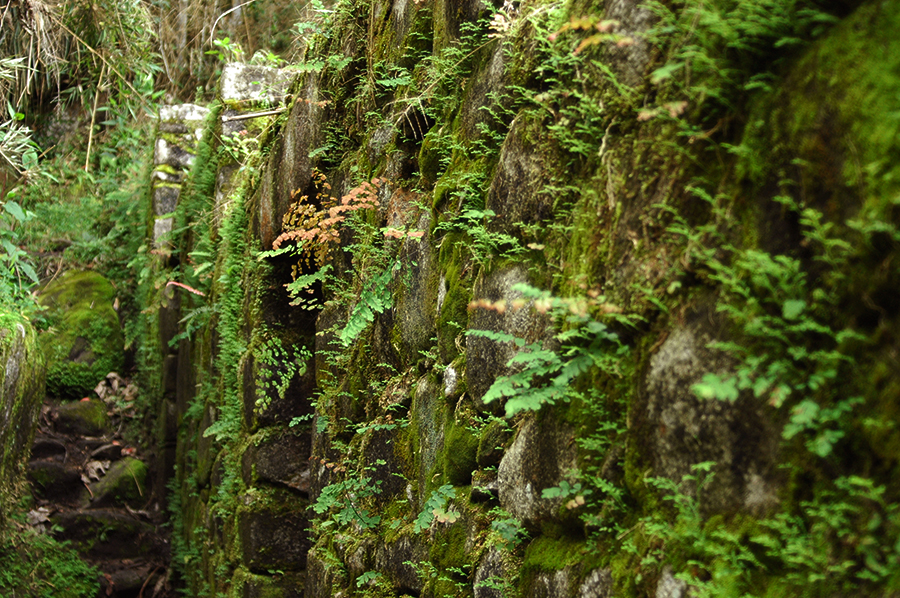 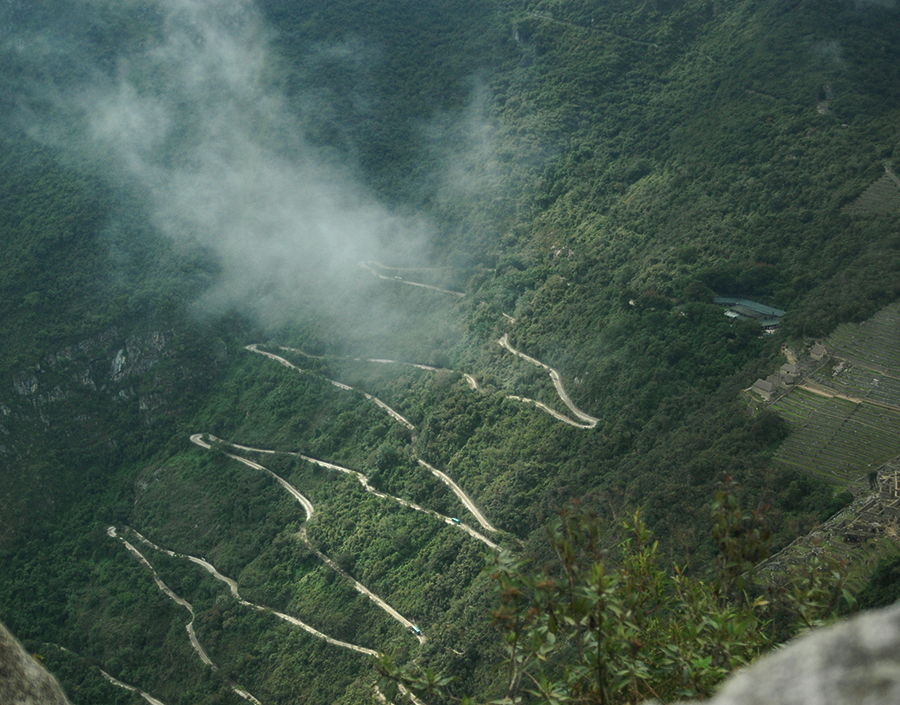 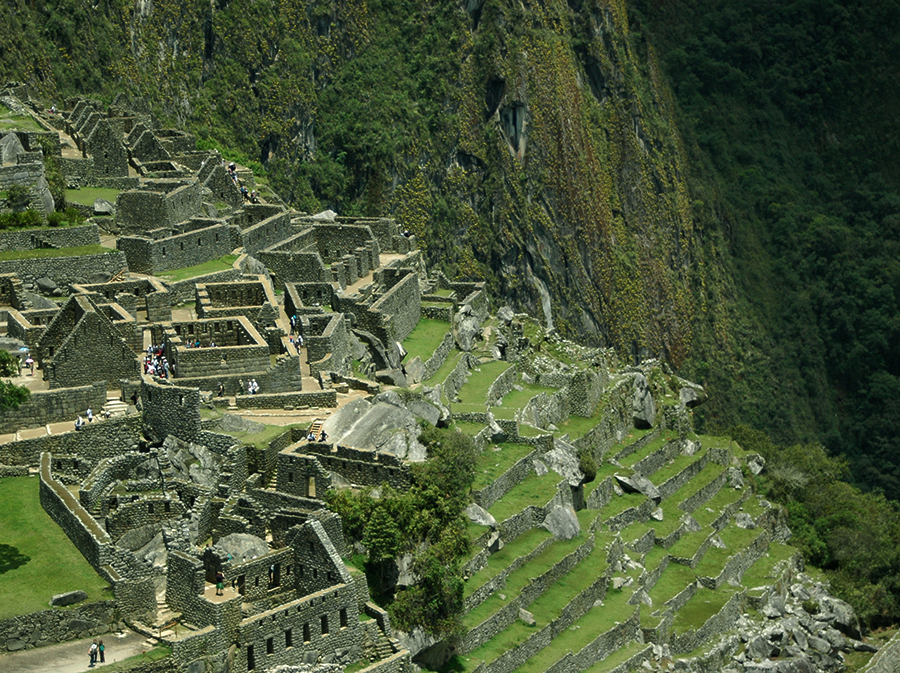 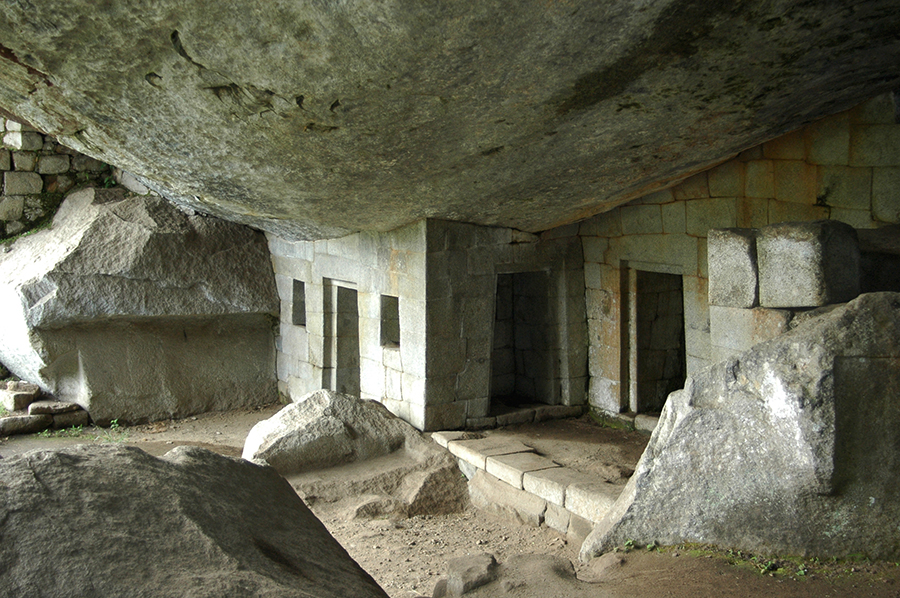 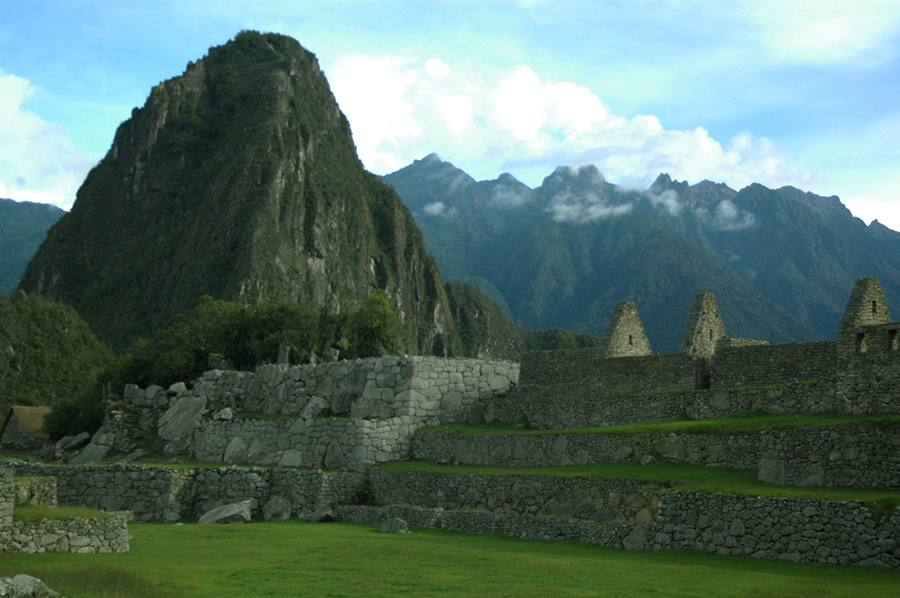 As I waited in line, I studied the sign that showed the different paths to take. There was one that lead up to Huchuy Picchu, a smaller mountain beside Huayna Picchu, there was the path up to the summit of Huayna Picchu  and another, called La Gran Caverna (The Great Cavern), which was about a four hour trek that would take you all the way around the mountain. I signed into their log in spot 94 and began my hike up Huayna Picchu, eager to reach the peak.

Pushed by adrenaline, I rushed up the steep Inca path to the top of Huayna Picchu and snapped a few pictures of Machu Picchu just before the clouds rolled in and obscured the view. After resting for a short time, I decided to do the long trek, the Gran Caverna path that would take me to the Temple of the Moon, one of three temples at Machu Picchu tucked on the opposing face of Huayna Picchu. No one is positive about the use of the Temple of the Moon, carved into a natural cavern in the mountain with several niches in the walls for relics and offerings. Some believe that mummies were kept in the Temple of the Moon, but the only definitive conclusion is that it was a place of worship for the Incas.

Following the signs for the Gran Caverna, I was alone on the path, surrounded by the cloud forest that made me feel as though I was tramping through the set of Jurassic Park. The stairs leading down to the Temple of the Moon were intimidating at times when I would stare down at a nearly 90 degree descent of narrow, stone steps, original Inca paths carved into the mountain. At one point where the stairs disappear, there is a rugged, wooden ladder that you have to climb to get to the next section. I took one section at a time, careful about my footing to avoid any injury, especially since I did not see or hear anyone around.

Just as the stairs began to taper out, I came upon a structure overgrown with moss and plants looking as I imagine all of Machu Picchu did when Hiram Bingham arrived in 1911. Around the corner from this Inca building was the Temple of the Moon. When I arrived I found a father with his son examining the space and shortly after a couple arrived who I’d seen earlier on my hike up to Huayna Picchu. We talked about the space, with its curved stone ceiling and gaping mouth that revealed the walls and niches of the temple. The father and son speculated that it might have been a burial site while the couple simply used the smooth boulder at the entrance as a stone sofa to relax their legs after the tough descent.

I recalled that when visiting Qenco, another Inca site carved into a cave, that the guide had mentioned that Incas believed that caves and underground structures like caverns were entrances into the earth’s belly and so places apt for the worship of fertility. I wondered if maybe the Temple of the Moon was also a shrine for the worship of fertility, though there is the detail about the mummies that may contradict this hypothesis. The mystery of Machu Picchu is one of its most alluring aspects for visitors and scholars alike.

I spent some time resting in the cool space of the temple before rounding the corner to continue the hike, which was, to the dismay of my weary legs and sore knees, uphill. In spite of my fatigue and mild fear of lurking bears and pumas, (although I was assured that there are none at Huayna Picchu) I thoroughly enjoyed the hike. Though it is a well-traveled trail, I felt like I was exploring uncharted territory, lulled by the hum of the birds and hush of the Urubamba River far below. Through the breaks in the trees, I could see the green tips of surrounding mountains and the wisps of clouds that always lingered about their peaks.

After another hour, I reached the path that I had started out on earlier that morning for the trek up to Huayna Picchu with views of the citadel in the distance. My energy was waning at that point after having gone pretty quickly around the circuit. I finished it in a little under three hours, and as I passed trekkers just starting out, I watched their faces that revealed their anxiety, excitement and eagerness for their trek. One young man with a camera and iPod buds hanging about his neck asked if it was really hard. If I had been honest, I would have told him, yes, it’s pretty tough, but I think that the best way to embark on any adventure is to know the bare minimum, to let it surprise you and push you to your limits.

When I signed out, there was a long line of people waiting to enter for the 10:00 time slot. The sun was hot already, and I was grateful to have had the coolness of the morning for my hike. My legs were shaking from exhaustion, so I found my way to the fountain to cool my face and then laid out on the terraces in the sun to rest after the rigorous trek around Huayna Picchu, thankful for the adventure.

If you have the chance to be one of the little dots on Huayna Picchu that people at Machu Picchu squint to see, I would definitely recommend it, and if you have the energy and the spirit of adventure, take the Gran Caverna  path. Escaping the crowds of Machu Picchu is possible, and the magic of this trail, its twists and plummets and spectacular views of nature are worth any soreness that may ensue-and it will ensue- but consider it a pleasant reminder of your journey to the Temple of the Moon!

During a two-day tour of Machu Picchu, hiking to the Temple of the Moon is one of several options you can choose to do on your second day. For more information about visiting Machu Picchu and Huayna Picchu, contact us.

Best Hotels In Cusco Cusco is one of Peru's must-visit destinations, a stunning city with cobbled-streets, crisp air and striking architecture. As the gateway to reach Mac...
Inca Trail Alternatives: Ancascocha Trek In this story we want to explain Inca Trail alternatives we have explored. A way to tell you our adventure firsthand. Let's go! One of the great jo...
Traveling for Wellness in Peru As more people across the globe look to shrubs, herbs and other vegetation for their natural wellbeing benefits, Aracari is anticipating a boom in tra...
5 Reasons to Visit Peru in February Peru is a year-round destination with something exciting to see and do every month of the year. Many travelers think they should avoid Peru in Febr...
Andean Luxury Handpicked by Aracari Travel How do you materialise what it is to visit Peru or Bolivia? Can one distil the essence of a place or a people into something tangible? To showcase cu...
Top 10 Things to Do In Peru If you tell anyone you're visiting Peru, they expect to hear that Machu Picchu is the focal point of your trip - and so it should probably be! The inc...
Tags: adventure travel peru luxury travel peru
Previous postThe Moche Route and Chicama Surf Resort
Next postNew Beachfront Resort KiChic Offers Zen Escape in Mancora