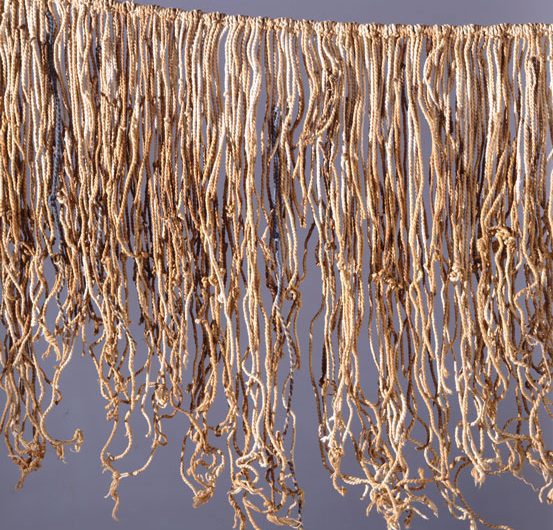 People living in pre-Columbian Peru did not need to use writing because they had developed other sophisticated means of keeping records, storing data and recounting stories based on textiles and cords. By the time of the Inca Empire, a device called the Khipu (also known as Quipu) had developed, a system of using knotted and coloured strings to record information. These Khipus would be carried by Inca messengers across the Empire to transmit messages and deliver important communications. 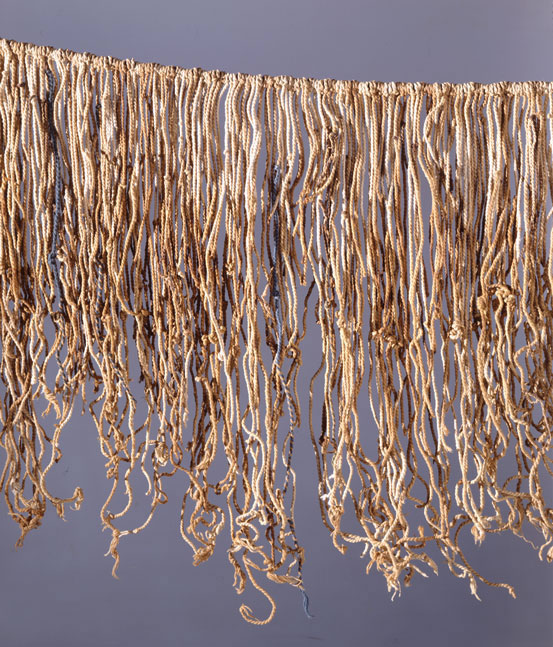 Picture of a Khipu from the Khipu Database Project website

The Khipu functioned in a manner whereby such details as the positioning of a knot on a cord, the number of revolutions of thread on a cord, the shade of colour of a cord and so forth would represent different numbers, words, ideas and sometimes even whole concepts. In conjunction with this, there was a strong oratory tradition in which stories and legends would be passed down from generation to generation by word of mouth, often assisted by a Khipu.

Unfortunately today, it is not known exactly how to “read” Khipus. During the conquest of the Incas the Spanish burned many Kuipus dismissing them as primitive, heretic and against the bible and the word of god; there are only around 600 that survive to this day. The Spanish found it perplexing that such a device could hold detailed information. The last person to have been able to interpret Kuipus is thought to have died only relatively recently, in the 1930’s, and tragically nobody thought it worthwhile to learn their skill!

Gary Urton of Harvard University has enacted detailed studies into interpreting the few Khipus that remain. Such studies reveal that there might be a tremendous amount of information held within Khipus, everything from Inca Empire census data and bookkeeping to astronomical data and interpretations of the cosmos. To find out more, visit the comprehensive Khipu Database Project website.

‘Tis the season: Gift giving in Patakancha In the spirit of the holidays, Aracari just returned from a gift-giving trip to the village of Patakancha set high in the Sacred Valley that surrounds...
Lodge-to-Lodge Ausangate Trek While recently in the Cusco region, I took the opportunity to hike the lodge-to-lodge Ausangate trek. This is an incredible high altitude 5 day trek, ...
Conscious Travel in Action – Aracari’s Plastic Free Policy For more than 20 years, our ethos of conscious travel has been at the heart of everything we do. Our goal has always been to protect the communities a...
A gift guide to Peru: what to buy where After traveling to Peru with Aracari, many of our guests often return home with precious keepsakes – handmade mementos of a special adventure to treas...
The role of ‘the Incas’ in their Inca Empire The Incas The Incas are famous the world over today thanks to the bucket-list prestige of Machu Picchu. Expert stonemasons, engineers and rulers, i...
Catch the wave: Surfing in Chicama Some say she's more popular than the President, and she's certainly made a splash on the world stage, but world surfing champion Sofia Mulanovich is h...
Previous postThe role of ‘the Incas’ in their Inca Empire
Next postLuxury Peru hotels: Aracari’s rundown of up-and-coming hotels in Peru