GETTING TO KNOW THE INDIGENOUS PEOPLE OF PERU 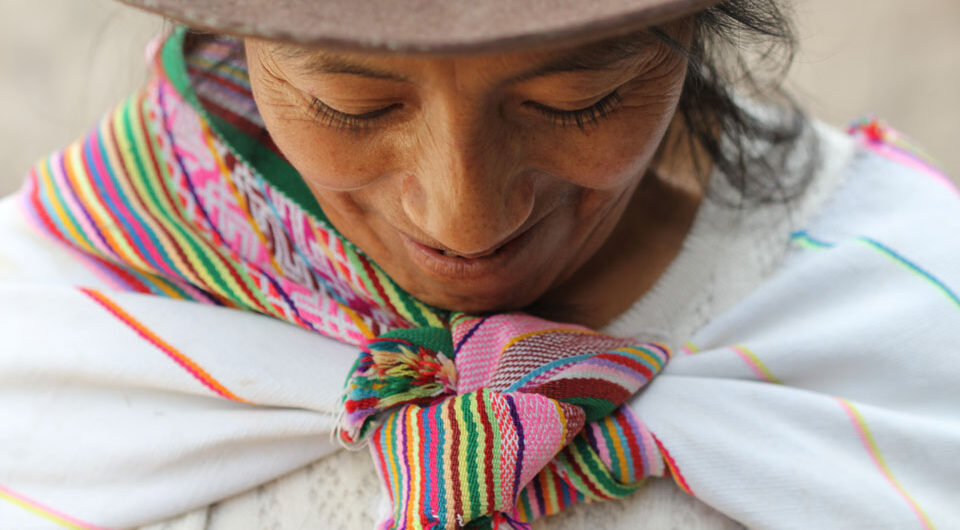 Peru is home to 51 indigenous communities, all of whom have a unique culture and way of life. Among the 31 million people who live in Peru, about 80% identify as either mestizo (a person of combined indigenous and European descent) or indigenous. From the high Andes to the jungles of the Peruvian Amazon, there are many thriving indigenous people of Peru to get to know. 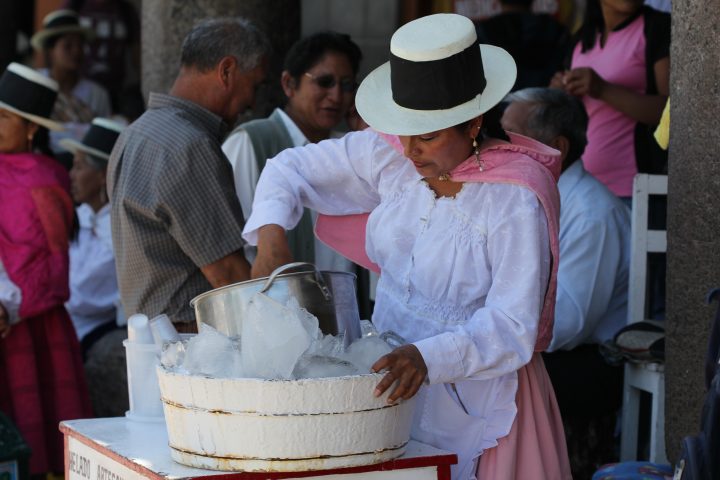 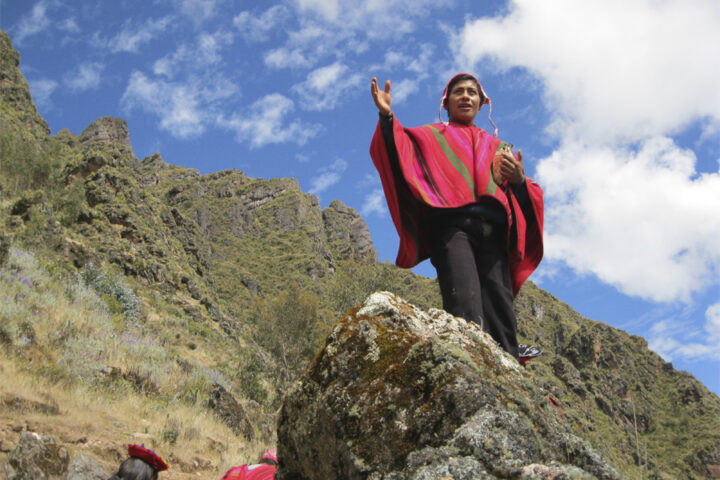 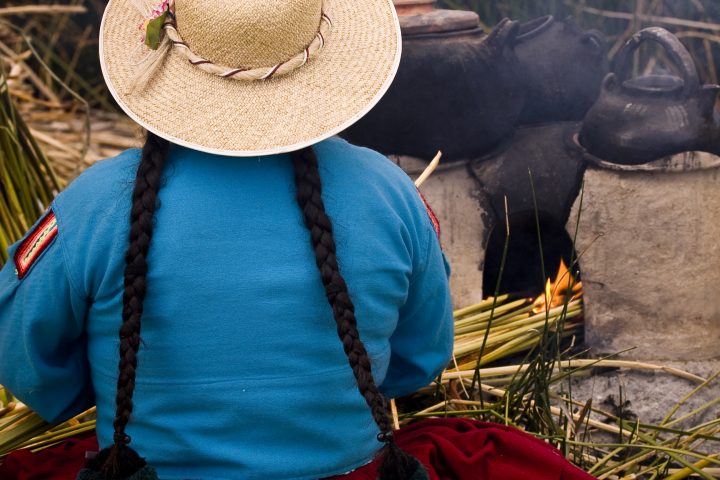 Living in the harsh, inhospitable landscape of the Andes requires a special level of toughness and adaptability – and the indigenous people of the Andes have this in spades. These communities have spent centuries living at high altitude, so they have a whole lot to teach us about survival amid harsh climates.

The Quechua are often the first indigenous people of Peru that travelers get to know upon visiting the country. Most Quechua people live in the Peruvian Andes, though there are other Quechua communities in Bolivia and Ecuador as well. The Quechua people predate the Incan Empire, and their way of life continued on long after the empire fell.

The Quechua people are the largest indigenous group in South America today. Most Quechua communities are in the high Andes and are focused on farming. The Quechua are known worldwide for their beautifully intricate textile arts, and for their ability to thrive in high-altitude environments.

The Aymara people also live in the Andes. They make their home in the Altiplano, which is a plateaued and windy region of the mountains. Like the Quechua, the Aymara have been around since long before the Inca empire. Today many Aymara people, as well as the Quechua, have spiritual practices that combine facets of traditional indigenous beliefs and Catholic beliefs brought over by the Spanish.

Many Aymara make their living as farmers and grow potatoes, quinoa, corn, and other crops. Many others work as herders of llama and alpaca. They mainly speak the Aymara language. 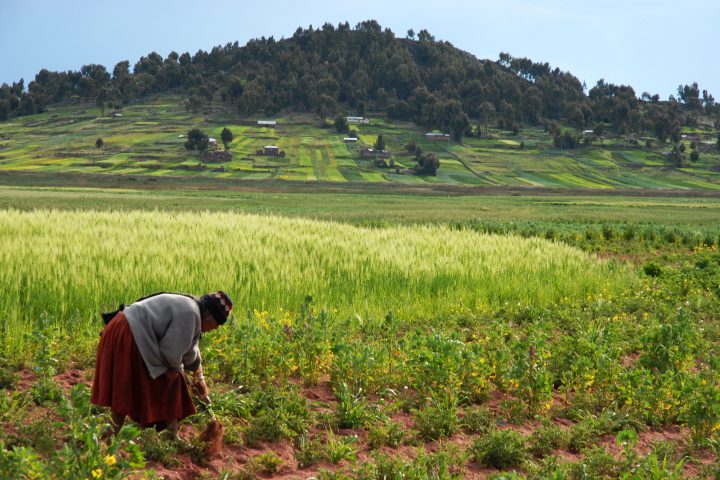 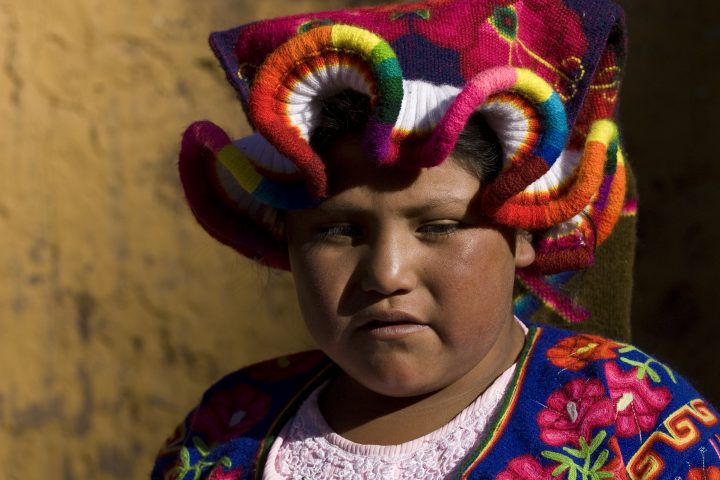 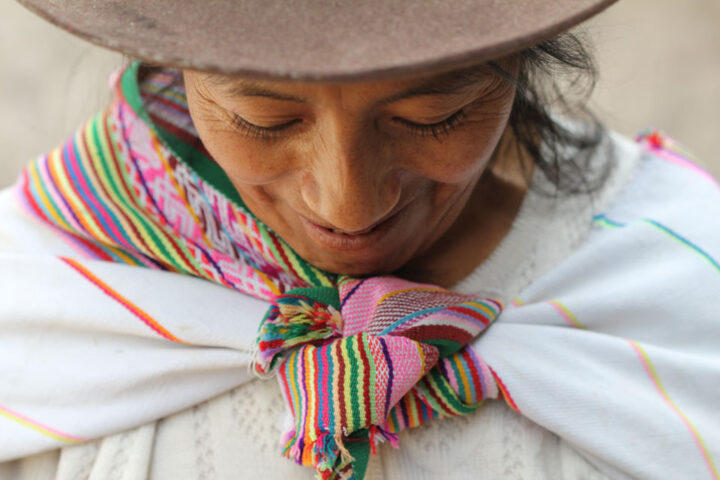 A major threat to indigenous way of life is the use of Amazon land for illegal mining and logging. Illegal mining for materials like gold, aluminum, and iron can cause major damage to once-farmable land. Illegal mining often employs the use of mercury, which can seep into local waters and contaminate communities’ supplies of drinking water and fish. As deforestation and the stripping of the land increases, indigenous people face a loss of land that hurts their ability to farm and hunt their food, as well as to have enough space to live a full life.

Among these many threats, activism to protect indigenous rights persists. In the 1970s, several indigenous leaders from the Amazon came together and formed federations to protect their interests. In the ensuing decades, their organizations have evolved and more activist groups have appeared. Many have been successful in reclaiming and preserving indigenous ancestral land. That said, there is still much work to be done to preserve the Amazon’s natural resources and the land that these communities call home.

The Shipibo-Conibo live along the banks of the Ucayali River, a tributary of the Amazon. At one time, this community was two separate indigenous groups – the Conibo and the Shipibo – but today, they are often recognized as one united tribe. This came to be through intermarriage and intercommunity connection over the years. The Shipibo-Conibo (along with the Matsés) are often recognized for brewing Chapo, a sweet beverage made of plantain, spices, and water.

The Machiguenga live in the Amazon Basin of Peru. They are hunter-gatherers who practice swidden agriculture, a sustainable farming process that moving onto to new farmland every few years and leaving the previous land to regenerate. The Machiguenga’s most popular crop is cassava, a root vegetable that looks somewhat like a sweet potato. 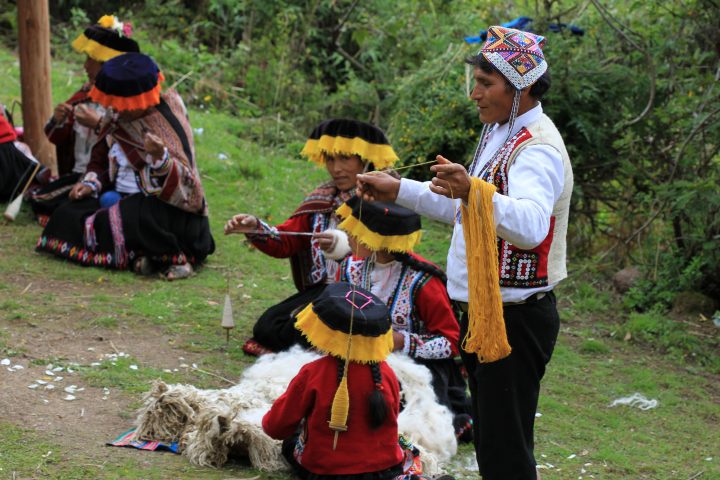 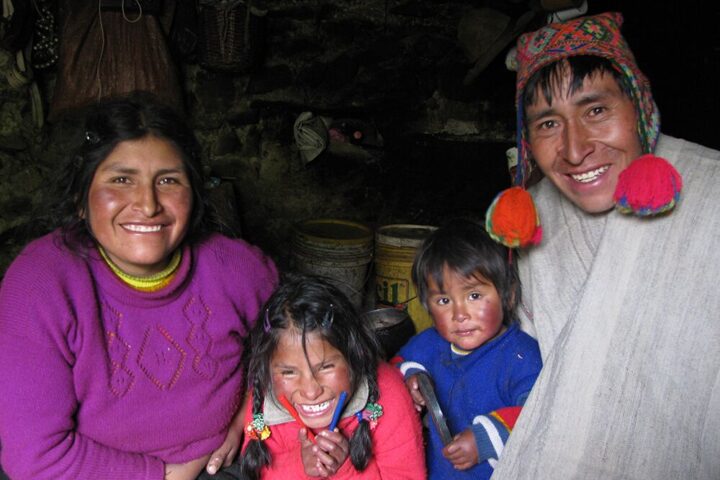 The Aguaruna (also known as the Awajún) mainly live along the Marañón River. They speak their own language, also called Aguaruna. Traditional Aguaruna communities are called yáakat, and usually consist of asymmetrical homes along the riverbank, with no roads or community squares.

Aguaruna are hunter-gatherers with an expansive and far-reaching knowledge of rainforest plants. When they hunt an animal or gather plants, they not only use it for food, but for medicinal purposes and for processes like basketmaking and ropemaking.

Aguaruna communities practice a tradition of helping one another for the good of the group, rather than relying on a more individualistic lifestyle. Examples of this include building houses for members of the community or helping in farming endeavors that will benefit the whole tribe.

In earlier decades, the Aguaruna were semi-nomadic, as they periodically moved to find more fertile soil and animals to hunt. These days, they move far less often due to the encroachment of surrounding land by non-indigenous people.

The Asháninka are one of the largest indigenous populations in South America, and they live in the rainforests of both Peru and Brazil. The Asháninka have come to public attention quite a bit in the past decade, starting in 2010 when Brazilian and Peruvian governments greenlit construction on a series of dams on Asháninka land. Parts of these projects were put on hold, while others continued to move forward despite the objections of indigenous rights groups.

The Asháninka community utilizes slash-and-burn subsistence farming to make their way, and plant valuable crops like yucca, sweet potato, banana, rice, coffee, sugar cane, and cacao. The Asháninka are also very skilled at hunting and fishing, using spears as well as bows and arrows to capture what they need.

In traditional rituals, the Asháninka paint their faces with crushed Achiote seeds, which are characterized by their bright red color. During special ceremonies, men in the community wear headpieces of palm leaves and feathers, while women wear cotton headdresses. 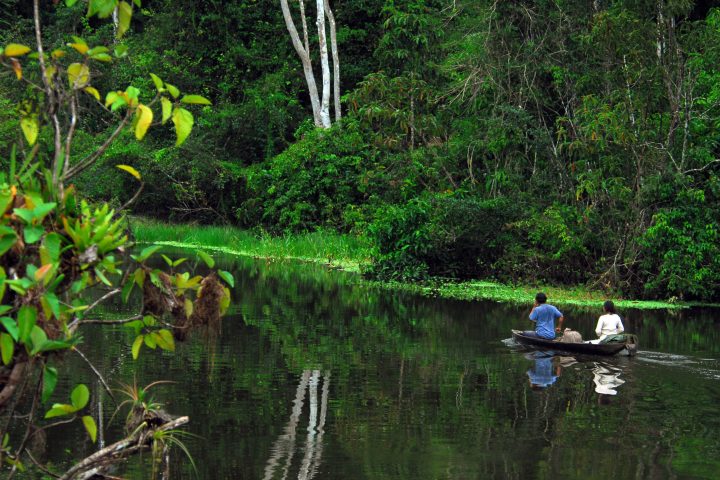 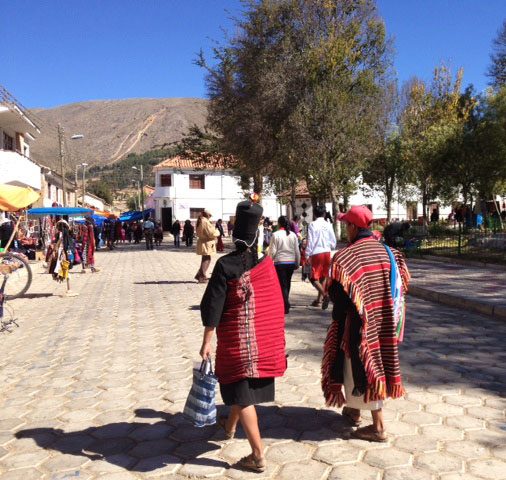 The Yanesha, also known as the Amuesha, live among 48 communities in the Peruvian Amazon. They make up a relatively small percentage of the indigenous population of the Amazon, but they have many unique traditions that are vital to preserve, including their own rich language. Most Yanesha live either in slightly elevated regions of the Amazon or along rivers within the rainforest.

The Yanesha have long faced encroachment upon their land and changes in their way of life with the arrival of non-indigenous people in their ancestral land. Because of this, the Yanesha became trailblazers in the Amazon indigenous community by forming the Amuesha Congress in 1969, which later became the Yanesha Federation, intended to protect their rights and encourage intercommunity dialogue. This has helped pave the way for indigenous protections that preserve the land and plants that are important to their way of life.

In past generations, the Yanesha fed their families through subsistence farming, hunting, and fishing. These days, they hunt less, instead raising their own livestock to eat, and they aim to raise valuable crops like coffee that can help support them. The Yanesha also craft and sell ceramics.

The Matsés are well recognized thanks to their facial tattoos and “whiskers,” lightweight sticks that women pierce into their noses. Both are intended to honor the jaguar, a cherished animal in the tribe’s culture.

The Matsés community have a deep, rich knowledge of traditional plant medicine. Many outside researchers and scientists are just now learning information about Amazonian plants that the Matsés have known for generations. The community hunts with bows and arrows that are made with detailed artisanal care. Living near riverbanks, they often fish as well.

These communities are just a few of the many indigenous people of Peru, each with their own vibrant customs and ways of living. All play an important role in making up the fabric of Peru’s unique culture.

Our trip and the service exceeded all our expectations Trip with Aracari - testimonial First of all Joyce and I want to say thank you. All the fine staff of Aracari that we met did an excellent job of car...
7 Lessons On Overcoming Adversity Peruvian Mountain Climber, Thomas Schilter, Talks To Aracari In the last few years Cusco resident and friend of Aracari, Thomas Schilter has summited...
The Best Small Hotels & Vacation Rentals In Peru In these socially distant times, there looks set to be a boom in demand for booking private vacation rentals and small boutique accommodation. The tre...
5 unforgettable days on the Ausangate Trek The Ausangate Trek is the highest trek in Peru. It takes you through some of the country’s wildest scenery, and is the perfect opportunity for travele...
An Insider Art Experience at Casa Jaime Liébana For art aficionados visiting Lima, Aracari’s special-access visit to the workshops and home of Lima’s renowned family of artists, the Liébanas, is an ...
Travel with Purpose: Stories of Sustainability At Aracari, we have spent the last 25 years’ fostering meaningful relationships with local suppliers, responsible hotels, indigenous communities and e...
Tags: INDIGENOUS PEOPLE Peru responsible travel
Previous postAdventures On The Inca Trail – And Why We Need To Preserve It
Next postARACARI’S FAVORITE INCA SITES IN PERU – AND WHY