A Guide To Peruvian Potatoes 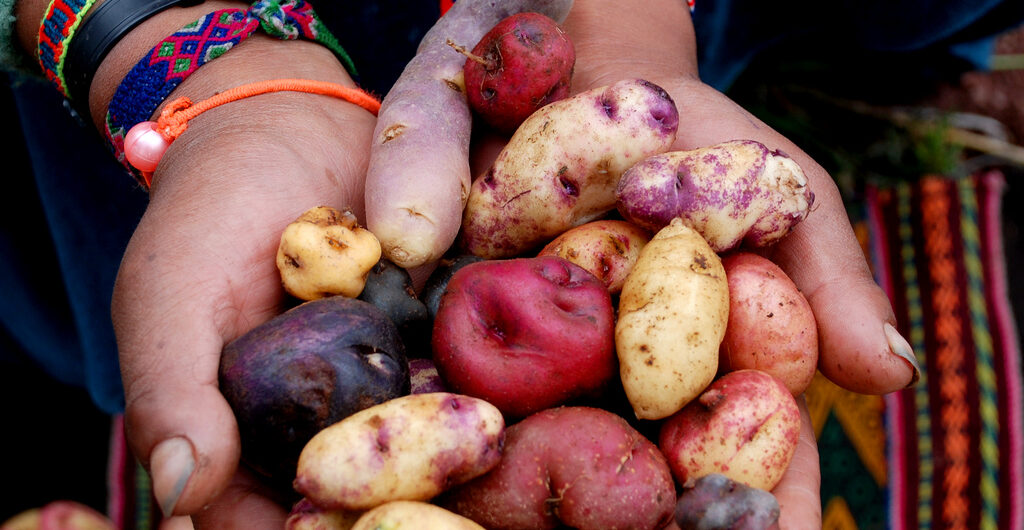 Among Peru’s many delicious and valuable crops, none shine so bright as the potato. This hardy crop is the most eaten vegetable in the world, so it’s no surprise that it’s treasured worldwide – and Peru is where the potato most thrives.

The History Of Potatoes In Peru

Scientists believe that potatoes grew in the Andean highlands of Peru, Bolivia and Chile as far back as 13,000 years ago. Around 7,000 years ago, people living in the Andes were growing potatoes, and praised the crop for its ability to grow in difficult climates. The potato was brought to Europe by the Spanish in the 1500s. While the crop was initially met with superstition, it ultimately became a staple in most Europeans’ diets.

Today, potatoes are seen by major organizations as a potential power player in the fight against international food insecurity. Their toughness and ability to grow in a wide variety of conditions makes them excellent options for growing food in regions where resources are scarce. At the International Potato Center in Lima, researchers focus on this idea and study the ways potatoes might help to eradicate worldwide hunger. Peru is also home to a potato bank, which stores thousands of varieties of potato seeds in a secure vault.

If you’ve ever wandered through a Peruvian food market, you know the crop is abundant in the country – but did you know that there are more than 4,000 varieties of Peruvian potatoes? (And more varieties are still being discovered!) No matter what type of tastes, colors, and preparations you prefer, there’s a Peruvian potato you’ll love. 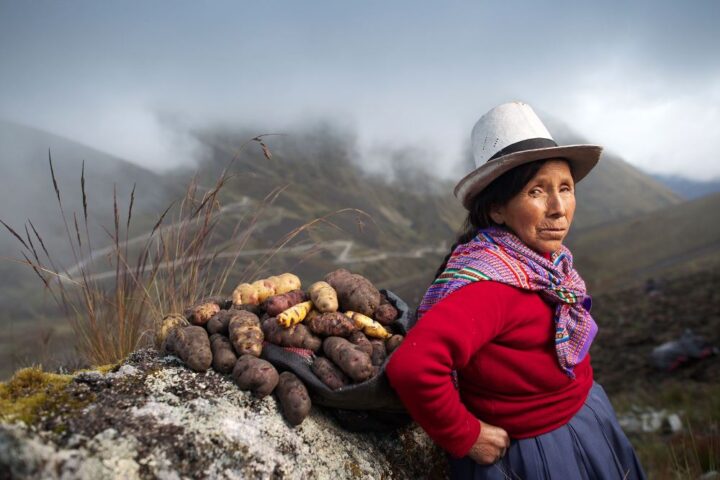 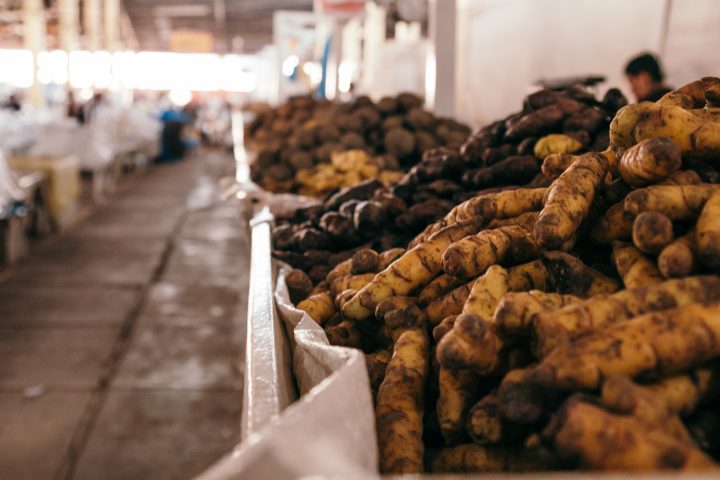 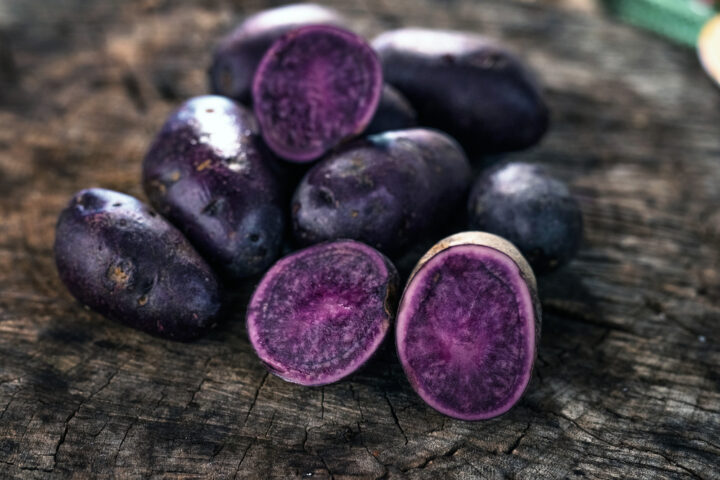 Potatoes are certainly delicious and filling, but they’re also not just used as everyday food – they’re also deeply valued as a part of Peruvian heritage. Subsistence farmers and local communities cultivate a diversity of potato varieties in order to preserve historic local traditions. Many special types of potatoes are traded and gifted among Peruvian communities. Some very special varieties of potatoes in Peru are even given as wedding gifts or other items of honor.

Potatoes in Peru are also sometimes used for holistic remedies and medicines. They are said to have medicinal properties for relieving headaches and treating skin irritation. They have also been used as an anti-aging tool in skincare. And of course, potatoes can be used to make compounds like flour and alcohol.

While there are far too many varieties of potatoes to list here, there are some that stand out as especially popular among Peruvian food and traditions. Here are some popular varieties of Peruvian potatoes you might come across, along with the colors, shapes, and textures that make them stand out:

Papa Huamantanga: A potato with white flesh but the rich texture associated with yellow potatos. It’s a common favorite, and you’ll often enjoy it in stew.

Papa Púrpura: A purple potato that turns slightly blue when cooked. This potato was especially treasured in the era of the Inca, when it was eaten by royalty.

Papa Peruanita: A potato with a vibrant, multi-colored skin and a rich taste.

Papa Tarmeña: This popular potato looks similar to a papa peruanita, and it’s commonly used in causa, a tasty favorite dish. You might also munch on this potato fried. 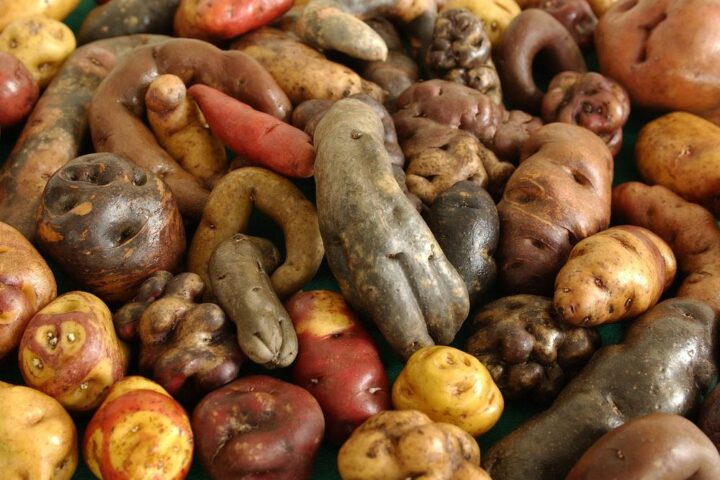 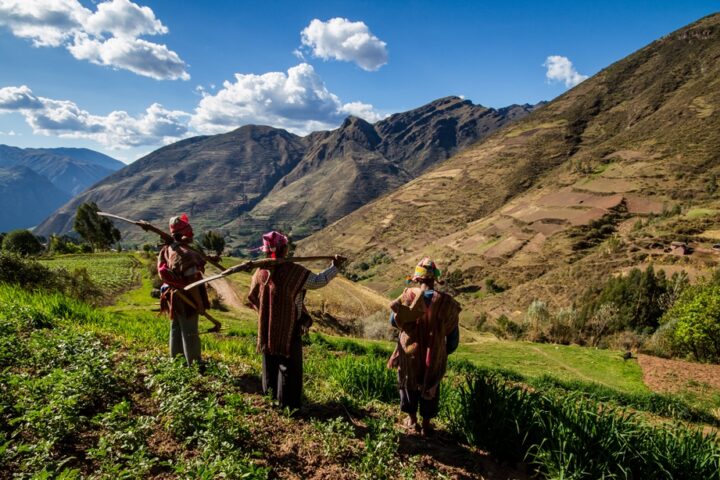 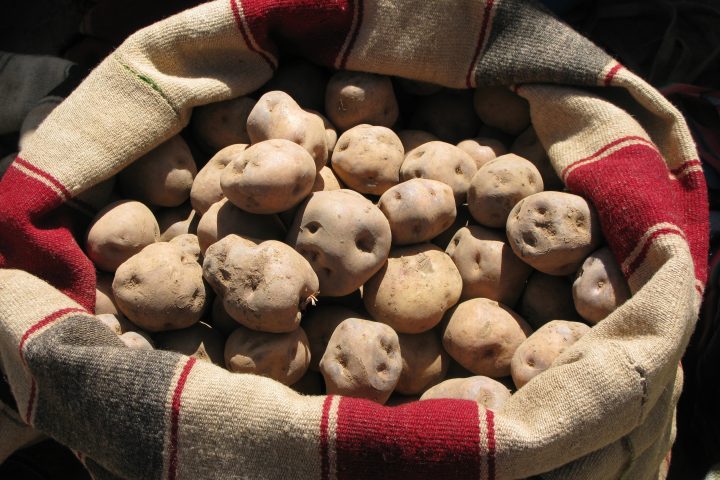 Papa Cóctel: A small, sweet cocktail potato with an intense flavor reminiscent of white potatoes. They’re tasty on their own or as part of a vibrant potato salad.

Papa Perricholi: A popular and relatively new variety of potato that is white and sweet.

Papa Huayro: This potato is known for its rich taste and is often used to add extra flavor to a dish.

Chuño: These freeze-dried potatoes serve as a traditional ingredient in some Quechua communities. Chuño has been eaten since before the time of the Inca. To make them, locals spread a series of small potatoes on the ground, and leave them outside overnight to freeze in chilly temperatures. In the daytime, as the sun shines down on the potatoes, locals trample over them to remove the water and skin. Chuño is eaten on its own or as part of dishes like soup or stew.

Oca: This bright-colored tuber is something of a competitor to the potato – it offers many similar perks but is in a category all its own. The crop originally came from the high Andes, where it was enjoyed by ancient cultures. You can still find it in many Peruvian meals today. Oca grows in colors like pink, purple, red, white, or orange. It has a crispy quality to it, as well as an unmistakable sweetness that most people love. It tastes great as part of both sweet and savory dishes.

Camote (Sweet Potato): Sweet potatoes (or camote) might look similar to their savory counterparts, but contrary to their name, they’re not in the same plant family as potatoes. That said, camote has been part of Peruvian culture for thousands of years, and has even shown up on ancient Peruvian ceramics. You can find camote in many different sizes and shapes, and it’s still grown in regions like Amazonia and Ayacucho.

Looking to experience a classic Peruvian take on potatoes? Here’s what to try.

Causa combines mashed yellow potatoes, aji pepper, and lemon juice with a variety of stuffing options. The final result has a trifle-like appearance and a delightfully fluffy texture. Causa is truly a work of art, both to eat and to look at.

A popular street dish, Salchipapas combines beef sausages and fries, topped off with a tasty sauce. It’s the perfect meal for anyone craving potatoes on the go. 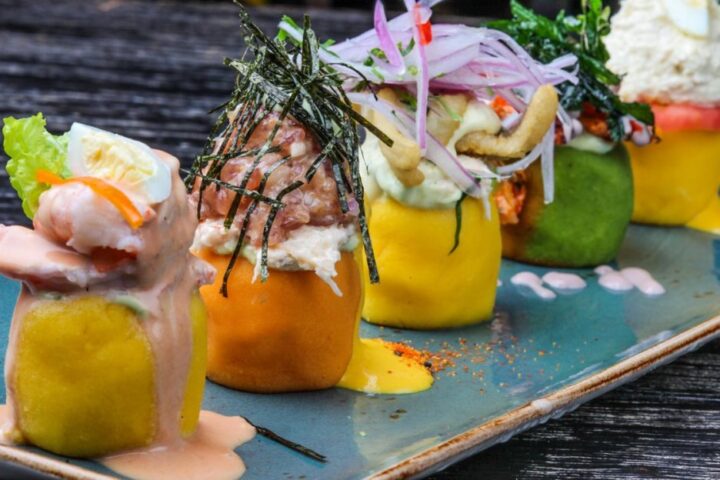 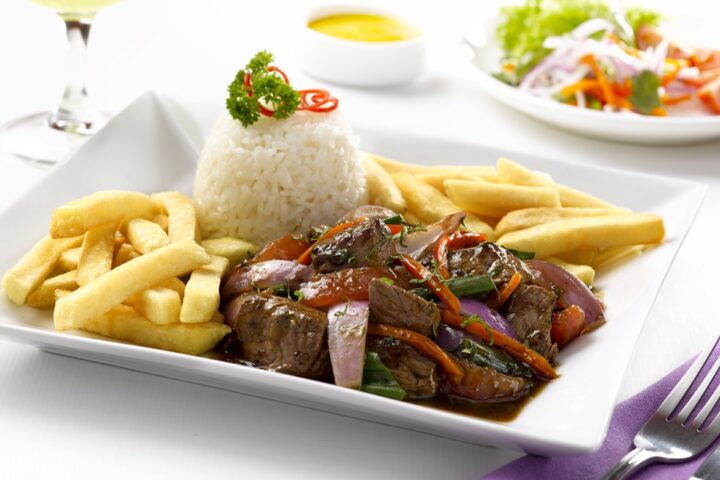 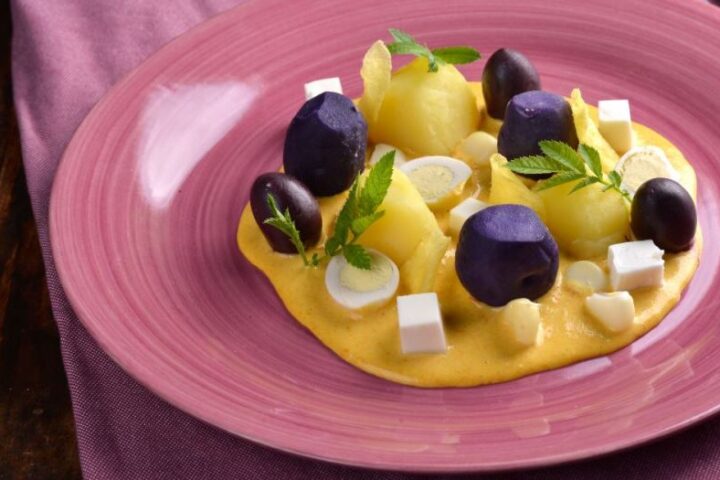 This delicious dish can be found throughout Peru. Papa a la Huancaína consists of boiled yellow potatoes in a creamy (and spicy) Huancaína sauce. The dish also includes boiled eggs, lettuce, olives, and aji amarillo. The tasty meal is named after the highland city of Huancayo.

This beloved dish, which you’ll find just about everywhere in Peru, has its origins in chifa (Chinese-Peruvian) cuisine. It includes beef, rice, soy sauce, tomatoes, and – notably – fried potatoes. It’s every bit as delicious as it sounds!

Where to try Peruvian potato dishes

You’ll find excellent potato dishes just about anywhere in Peru. That said, if you’re looking to see how a big-name eatery presents the ingredient, here are a few places to try:

MIL in the Sacred Valley

This world-class restaurant in the Sacred Valley has been called “a religious experience.” When you visit, you’ll enjoy an 8-course meal, with the ingredients of each course reflecting the crops that grow in eight Andean ecosystems. Many offerings feature innovative uses of hyper-local potato varieties.

Maido, which was named the Best Restaurant in Latin America in 2017, specializes in Japenese-Peruvian fusion (known as Nikkei). With the help of fantastic local ingredients, Maido offers up unique meals you’ll never forget. For a taste of potato, try the potato cream-filled dim sum dumplings.

This collaboration between chef Gastón Acurio and his wife, pastry chef Astrid Gutsche, is a favorite among Lima locals. The menu focuses entirely on Peruvian favorites. The eatery’s grilled octopus with crushed potatoes and aji panca is a great example of how potatoes can be blended perfectly with seafood.

Want to prepare a Peruvian potato dish yourself? Stop by a local market in Peru, take in the bright colors and variety of all the potatoes on offer, and don’t be afraid to ask for advice. You’re just about guaranteed to head home with something tasty.

Ready for your own Peruvian food adventure? Contact us for more information!

Astrid y Gastón: One of the Best Restaurants in Lima Peru Lima, Peru is often referred to as the culinary capital of Latin America thanks to its selection of the top restaurants in the region, and three of th...
5 Peruvian Recipes For Summer This month, Aracari’s special gastronomic advisor Maria Julia Raffo has kindly shared with us the details of five dishes Peruvians love to make in sum...
The Best Restaurants Arequipa Peru is the food mecca of South America, proudly laying claim to a selection of the best restaurants in the world and the #1 restaurant in Latin Ameri...
3 Top Peruvian Ingredients From Chefs Pia León And Virgilio Martínez A whole host of the top names in the culinary world call Peru home, and there are few foodie names you’ll hear more often than Pia León and Virgilio M...
Aracari launches The Peru Food Guide, second edition. Today Aracari Travel are proud to launch the second edition of The Peru Food Guide – the ultimate culinary travel guide across the Peruvian Pacific co...
Hacienda Sarapampa Home of Giant Corn Sarapampa is a Quechua word which means 'cornfield', a fitting name for this beautiful and sprawling property of Hacienda Sarapampa in the Sacred Vall...
Tags: food in Peru Peru culinary travel Peru food travel Peruvian food potatoes
Previous postA new and more modern airport for Cusco, YES! In Chinchero, NO Please!
Next postYour Guide To Things To Do In Arequipa And Colca Canyon