A Visit to Casa Garcia Alvarado 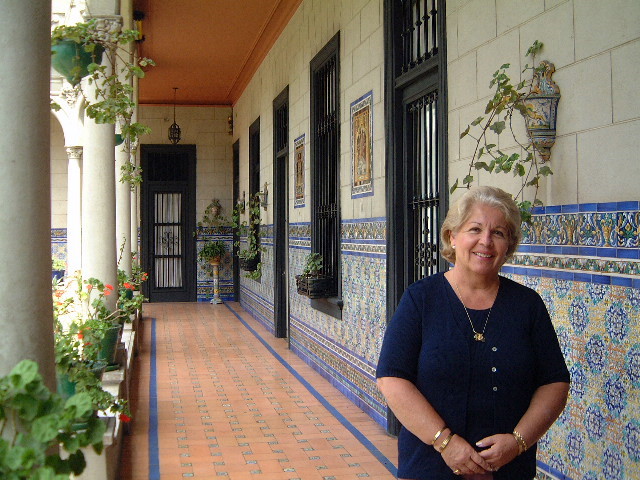 Lima is home to a range of exclusive private homes. Casa García Alvarado is a Republican home in the heart of Miraflores that welcomes visitors behind closed doors to visit the grounds and enjoy a meal with the owners for an exclusive insight into Lima’s history.

At the beginning of the twentieth century, Lima’s upper class started to move from the center of Lima towards the coast. Miraflores became one of the first residential districts where Limeños purchased land and built vacation-style homes. One of these houses, Casa García Alvarado, not only still stands in very good condition, but is open to visitors interested in learning about the history of Lima from the perspective of a Peruvian family. It is also available for private lunches and dinners as well as private functions such as wedding receptions. 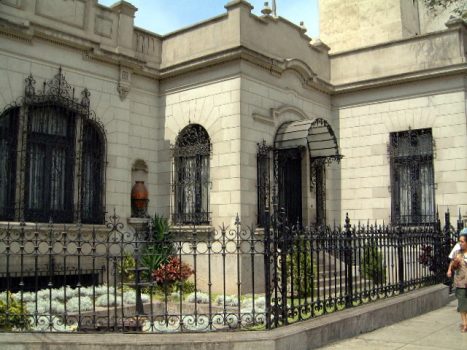 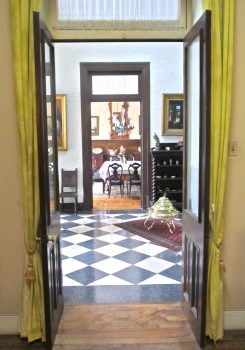 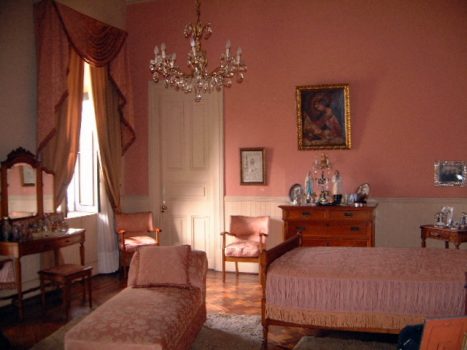 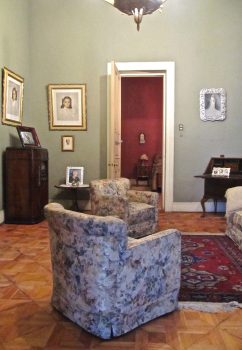 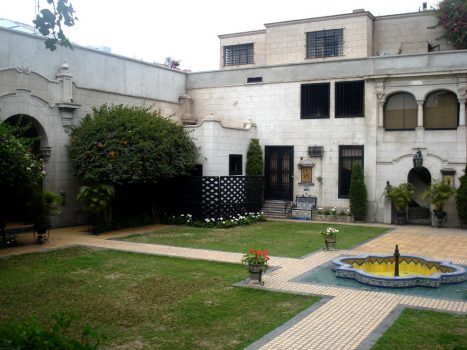 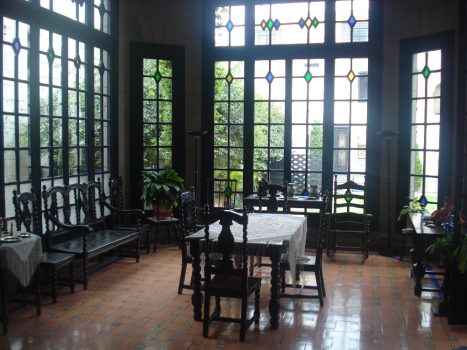 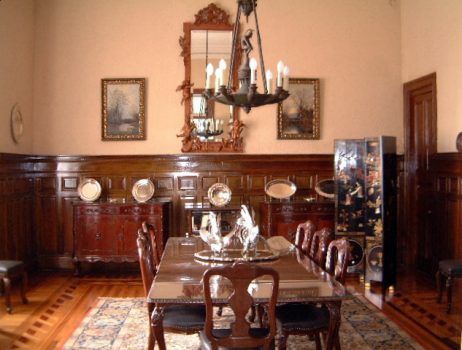 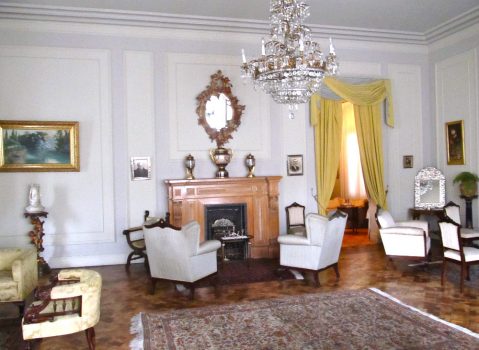 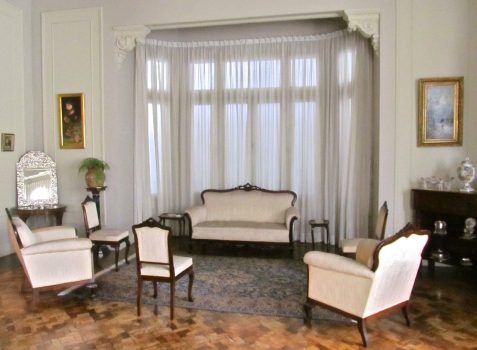 Aracari visited recently and was welcomed by the owner Mrs. Ana Maria García Alvarado de Astudillo for a tour and to enjoy this special insider experience in Peru. We were greeted at the door and lead into the drawing room and offered a pisco sour each or a non-alcoholic refreshment and the rounds of hors d’oeuvres began. Ana Maria soon joined us and greeted us in perfect English, explaining that she went to an American school in Lima run by nuns from Philadelphia when she was young. She is now so accustomed to conversing in English with the guests she shows her house to that giving descriptions and telling stories often comes out automatically in English instead of her native Spanish. She also speaks basic Italian and German.

Life growing up in Lima

As we spoke with Ana Maria and enjoyed our hors d’oeuvres she told us about her childhood growing up in the house, how her family came to move to Lima from Cajamarca generations before, her interest in tourism since she was a child, and the rules of the household enforced by her father well into her college-age years. I won’t ruin the stories, as it really is a pleasure hearing them directly from her! Ana Maria is a charmer, so it is no wonder that she is a longtime friend of Aracari Founder, Marisol Mosquera.

The History of Casa García Alvarado

Prior to giving us a tour of the property, she explained about the history of the house. After 1821, houses in Lima were built in the Republican style of architecture, using quincha, or adobe, which resisted damage during earthquakes. Casa García Alvarado was built  for the Castro Iglesias-Thorndike family in 1912 when Park Kennedy and the Church of the Miraculous Virgin already existed but Avenida Larco wasn’t more than a small road. In fact, the house had a garden in the front yard where there is now a sidewalk and a busy street with buses rumbling by.

Casa García Alvarado was remodelled in 1932 to look similar to Lima’s Presidential Palace, also remodelled around the same time. The work was done by Luis Santisteban Benavides, an architect and engineer. In addition to a drawing room, dining room, various bedrooms, rooms for live-in staff, and even a bar area with multiple tables and a hidden bathroom that blends into the wall downstairs, there is a large Spanish-style courtyard complete with beautiful tiles from Seville, Spain.

The family history dates back to colonial times in Peru. The Castro Iglesias side of the family descending from Spaniards, and the Thorndike side from a Chilean and an American engineer who moved to Peru to work on railway bridge construction in the Andes. The Castro Iglesias and their daughters, Virginia and Rosa, made the house their main residence. Two of Javier García Castro and Rosa Alvarado de García Castro’s children, Ana Maria and Josefina, are the current owners. They decided to open up the house to visitors and  private local events after their aunt, Virginia Alvarado Castro, passed away. Ana Maria usually provides the tours and the fascinating stories over cocktails and hors d’oeuvres but when she is not available, her daughter entertains guests as well.

Ana Maria lives in a wing of the house renovated in the 1940’s, so she is truly opening up her home to visitors. It’s a lovely experience to view a traditional Miraflores residence, complete with family photos, old furniture, and the original style as you hear what it was like growing up in Lima back in the day and the history of the area.

Interested in visiting Casa García Alvarado in Lima? Contact us for more information and to arrange a visit as part of a private, tailormade trip to Peru.

Meet Our Guests The sheer scope and scale of South America means that we can hand-craft ideal travel itineraries, no matter what the motivation is for travel here. Af...
A Visit to the New Gift Shop and Tearoom at Lima’s Cathedral Lima's Cathedral Gift Shop & Tearoo This August Lima's Cathedral finished renovating the gift shop, and Aracari received an invitation to come se...
Chocolate Workshop Peru at the Choco Museo Peruvian cuisine has been in the spotlight for sometime now, winning awards, inspiring new restaurants in Peru and abroad, and building a reputation t...
Recommendations for a Long Weekend in Lima Peru’s capital city Lima is brimming with historic sites, top restaurants, and many of the country’s best museums, boutiques and galleries. Once consi...
Aracari’s New Look Aracari's New Website & Branding We are back after a few months of silence with our monthly newsletter, which I know many of you have much enjoye...
Belmond Andean Explorer: Luxury Train Peru Last week I left the hustle and bustle of Lima and adventured south to begin a multi-day escape from Cusco to Lake Titicaca and Arequipa on South Amer...
Tags: Aracari team Historic Lima Lima architecture private tour lima things to do in lima
Previous postThe View from Above: Riding the Cable Cars in La Paz, Bolivia
Next postThe Apu’s Trail: Ausangate Lodge Trek