For several decades, the Instituto de Arte Contemporáneo (IAC), a major national cultural institution, has been fighting to provide Peru, and particularly its capital city, with a proper museum dedicated to contemporary art. In January of this year, the IAC finally made this dream a reality and opened the Museo de Arte Contemporáneo (MAC) in Lima’s artsy district, Barranco.

In addition to an international selection of works from the collection of the IAC dating back to 1950, the museum recently opened a new exhibit known as “Lima 04”, the postal code for Barranco (where the museum is located).  The exhibition focuses on the relationship between the 13 artists on display and how Lima has influenced their work.  It features four distinctly themed sections each with its own curator, which allows for a variety of unique perspectives on artists’ works in a variety of different mediums including sculptures, photographs, videos, and embroidery. 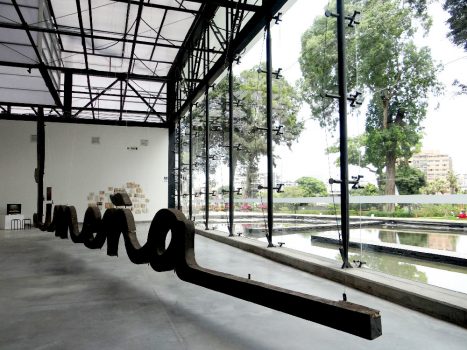 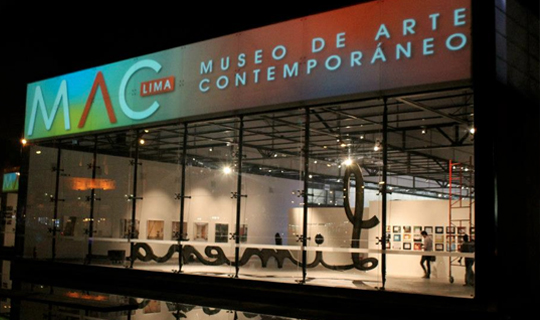 The first theme, curated by Rodrigo Quijano, focuses on the use of public space throughout Lima and rituals of representation and identification. This includes the work pictured below, was formerly a sign atop a building in central Lima.  Daniel Contreras, the curator of the second theme, deals with the personal relationships between artists and the diverse city of Lima.  This includes works from the late Santos Sánchez, whose murals depict life in the working class districts of Lima. The third perspective, that of curator Miguel López (who also curated a previous exhibition sponsored by Aracari), reflects on the construction of public works through the display of photos of the billboards throughout the city. Finally, the fourth section, curated by Gabriela Germana, addresses immigration from the perspective of those moving from outside provinces into Lima, for example, through a series of paintings depicting a mass migration from Ica to Lima in the 1980’s and examining how these immigrants transformed and adapted to new lifestyles. By unraveling the intricate and multifaceted lifestyles, perspectives, and values, the artists and curators help shed new light on the realities that exist within the fourth largest city in the Americas.

The Museo de Arte Contemporáneo (MAC) can be found at Av. Miguel Grau, Barranco. It is open to the public Tuesday to Sunday from 10am- 5pm. The entrance fee is S/8.00.

In addition to MAC, Barranco is home to wide variety of intriguing galleries, museums, boutique shops, and restaurants, including Galería Lucía de la Puente, Dédalo, Las Pallas, and much more.  To learn more about how you can include a cultural tour during your visit to Lima, please  contact us for more information.

The Best Beach Houses on Peru’s North Coast Beach houses have always been a popular accommodation choice for those enjoying long vacations or traveling in  groups. As lockdown restrictions aroun...
The Northern Circuit: Tying together destinations in northern Peru With such destinations as Cusco, Machu Picchu, Lake Titicaca and the Nasca lines, a well-established tourist circuit has been etched for those wanting...
Peru’s Vibrant Candelaria Festival – Puno An amazing Peru festival in your trip Each year during the first two weeks of February, Puno hosts one of the largest and most vibrant festivals in a...
Are We Really Travelling Into Parts Unknown? In Conversation with Aracari Founder, Marisol Mosquera. (April 2020) In light of current global events, Aracari’s Founder, Marisol Mosquera speaks op...
Freewheeling across the Andes: Peru Motorcycle Tours Peru Motorcycle Tours Coasting along the open road, the exhilarating feeling of cruising through wild mountain landscapes between multiple points of ...
Urban Kitchen – Lima Cooking Workshop Lima is fast becoming known as the gastronomic capital of South America. We're constantly raving about the amazing restaurants, many of which are reco...
Previous postThe Ship, The Lady, and the Lake: Meriel Larken’s Captivating Tale of the Yavari Steamship
Next postPisco and Wines of Peru: Pisco Portón