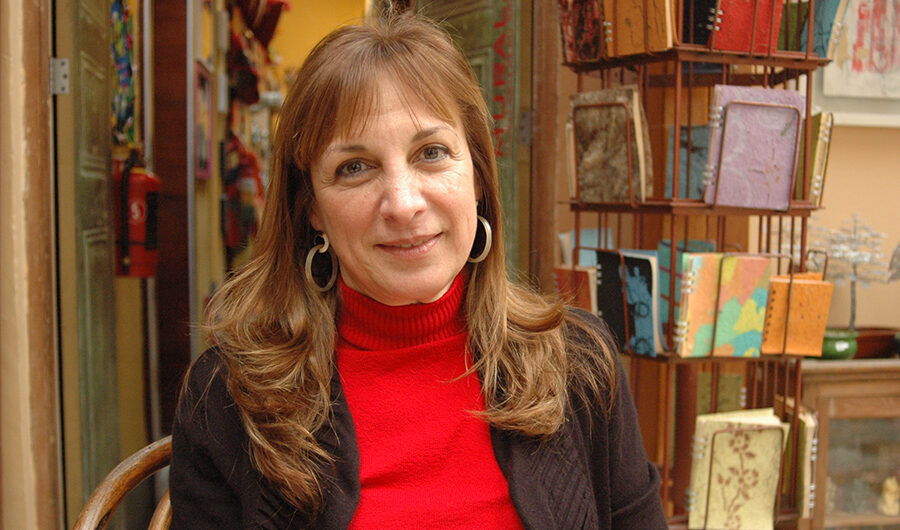 Last Thursday evening the Centro Colich in Barranco, Lima was abuzz with people milling through the gallery to see the works of artist Puchi Noriega, a friend of Aracari. It was Puchi’s debut in the Lima art scene after having moved back to her home country two years ago. The exposition, called Vi-Gente, attracted a lot of attention and stimulated many conversations in the evening as gallery visitors sipped wine and chatted about the pieces. After a successful inauguration, I sat down the following afternoon with the artist to talk about the exposition, her art and her experience returning to Peru after twenty-nine years abroad.

Puchi, a self-taught artist, was born and raised in Peru, where her family had a ceramics studio. Her favorite subject is the human form, and she has exhibited her works in over 50 group and individual expositions. She explained that she has always had a studio and doesn’t know what life without a kiln would be like, having grown up immersed in the world of clay sculpture and ceramics. At age 14 Puchi and her family moved to Canada, where she maintained strong ties to her Peruvian identity, practicing Spanish daily with a friend and cooking Peruvian recipes like tamales to ensure that she would not lose it. In her late teens she moved back to Peru for a few years, teaching sculpture in Lima and after lived in Miami for twenty years before her latest return to Lima.

Six months ago the Centro Colich gallery commissioned her for this exposition, and she has worked hard—up until three days before the inauguration—to get her pieces finished. She explained to me that the week before the inauguration she was firing pieces every day. Working with clay is a complicated and slow process. Sometimes people ask her to fire a piece and expect to take it an hour later, but that is not possible. With the humidity of Lima, pieces take at least 2-3 days to dry before they can be fired, and then the pieces must be fired for 24 hours after which the kiln has to cool completely. Once the kiln cools, you have to glaze the pieces and fire them again, and sometimes after firing the pieces, they come out looking completely different!

For her Vi-Gente exposition, Puchi was inspired by the changed Peru she found upon her return, discovering a country of growth, prosperity, and most surprisingly, people proud of their Peruvian identity. Before she left, she felt that everyone aspired to be like Americans; everyone wanted to dress like Americans and look like Americans and go to America, but that has changed. People are proud of Peru, and in general, she has found that people seem to be on the up and up, investing in the country economically and culturally.

This prosperity, the idea of “the up and up” is the inspiration behind the stairs pieces she created for the exposition—everything is going up, the middle class is booming in Peru, and across the country there is general prosperity across ethnicities and economic class. Hence the name “Divergente”, which would indicate in English, ‘diverse people.’ Puchi explained that her life experience is with clay, but the pieces with the stairs proved a challenge. In the end, she had to make it three times to get it right. However, the work was worth the trouble as the pieces turned out perfectly, and one even sold the night of the inauguration. 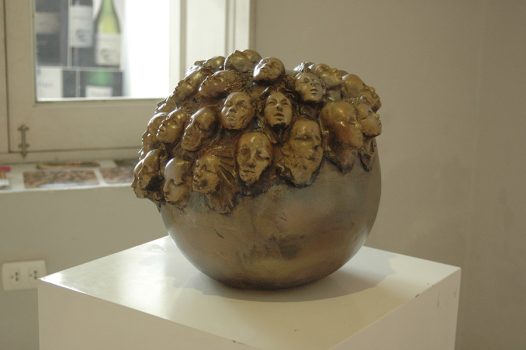 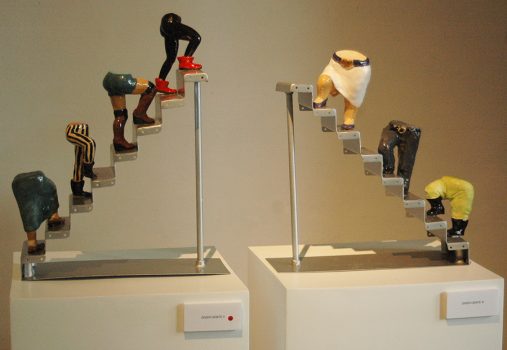 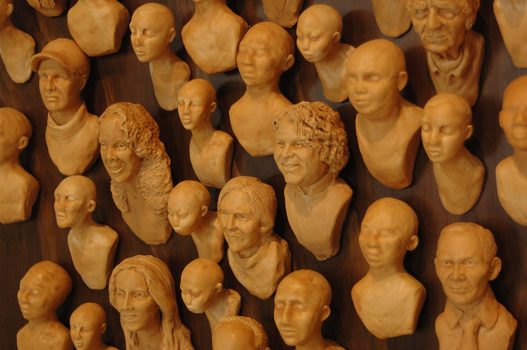 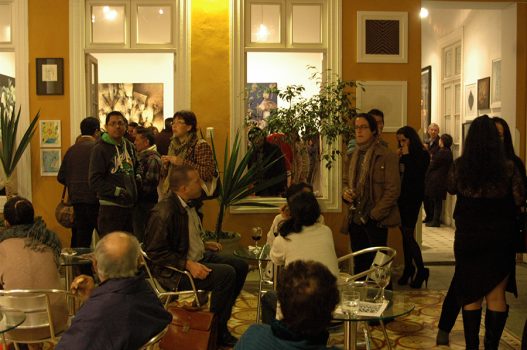 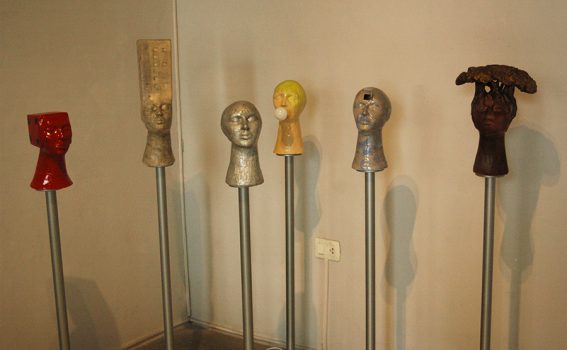 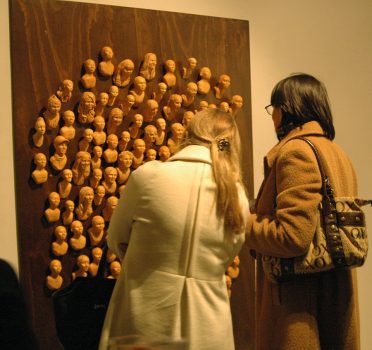 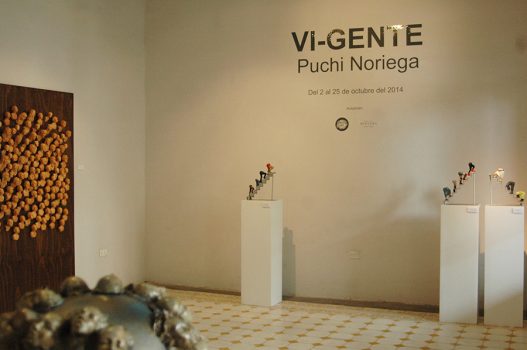 In the stair pieces, gender play, present in much of Puchi’s work, appears with a woman’s figure leading a group of men. As Puchi explained, she feels strongly about being a woman. Her mother was part of the woman’s rights movement and taught her and her sisters to feel proud of being women and that they should always see themselves as equals to men.

Another piece in the exposition represents the changes Puchi found in this new Peru she discovered upon arrival: one head represents the growth with trees blooming out of the cranium–Existentialism–while the next shows a head painted like the sky with a small open door right in the center of the forehead—Positivism, the open mindedness of the new Peru. Another head has a flashlight in it—Ism, the ideas and innovation. A fourth head has a building growing from the top to represent urban-ism and the next a die to represent the luck and chances, an approach to life that is risky, and finally a sixth head has 001’s, the bits and bytes of technology that often pushes these societal advances.

The most talked about piece of the evening was titled Vi-Gente, which is made up of mini-busts of many well-known Peruvians, who are currently contributing to the wave of Peruvian cultural pride that Puchi has noted upon her return. People at the inauguration crowded around it, identifying the familiar faces, which sparked further conversation. In addition to these well-known Peruvians, anonymous faces were included, the unknown people living in Peru today who are contributing to the country’s progress and those who will be known in the future.

Puchi now considers Peru her permanent residence and has a small studio in Miraflores where she works and teaches sculpture classes to all levels of artists. She is already planning her next exposition, which will take place in May in the Euroidiomas Gallery of Miraflores. She told me before we left that now she feels like she is taking off in Peru, really beginning to fly.

The Vi-Gente exhibit will be on display at the Centro Colich from now through October 25th.

Evenings in the Jungle with Posada Amazonas and Refugio Amazonas Private luxury amazon lodge ideal for families The Amazon rainforest is a destination for true adventurers. Travelers who fear the mighty mosquito ...
Dakar in Peru: World-renowned race starts in Lima this weekend It’s that time of year again, and the Dakar rally is returning to Peru for the second time! Last year the race finished in Lima, with the final stages...
Inka Trek to Choquequirao Located on a mountain spur, overlooking the Apurimac river on south and the vertical slopes of the Vilcabamba range to the north and east, Inca Choque...
Aracari’s Weekly Insight #14: Inca Royal Weddings The Question: Did Inca royalty really marry their sisters? The Answer: The short answer is, yes, it is true that in late times of the Inca Em...
ArtLima International Art Fair 2016 Peru has a world-renowned heritage of art and culture and also a growing contemporary art scene, so the credentials for a successful international art...
Visiting the Mario Testino Association in Barranco, Lima It was a sunny Saturday afternoon in Lima, and I decided that I wanted to see the new exhibit Piruw and Wanu at the art gallery MATE. I wandered down ...
Previous postCusco Through the Lens of Martin Chambi
Next postMATE Exhibit Legends in Light by George Hurrell