Today marks the colorful celebration of Inti Raymi, or the “festival of the sun,” thought to have been one of the most important rituals in the Inca Empire.  On June 24th each year just after the Winter Solstice, a religious ceremony takes place venerating Inti, the most significant God in the pantheon of Andean religion.  Huge importance was placed upon the movement of the sun, and the solstice marked the return of the sun from its farthest position from earth. This also meant the beginning of longer days, the start of a new cycle, and the return of the source of life to the Andes.  Thus, Inti Raymi was a celebration of the Inca New Year.

A theatrical reenactment of the celebration takes place each year in Cusco, attracting thousands of locals and tourists alike.  In preparation for the festival, hundreds of actors are chosen to take part in the reenactment, including the Sapa Inca, the ruler of the Inca empire. On the morning of the 24th, the crowd assembles at the fabled Koricancha, or Sun Temple, and takes part in a ceremony led by the Sapa Inca and praising Inti.  The crowd then marches to the Plaza de Armas carrying the Inca on a golden throne to continue the celebrations before beginning the climb to the temple-fortress of Sacsayhuaman. Following in tow are the hundreds of other participants, including high priests in traditional ceremonial robes, officials of the court, and other nobles, all dressed in colorful garb.  Once they arrive at Sacsayhuaman, an elaborate ritual takes place including several speeches and sacrifices.  The ceremony ends with a procession back to Cusco’s main square and once again, the Inca new year has began. 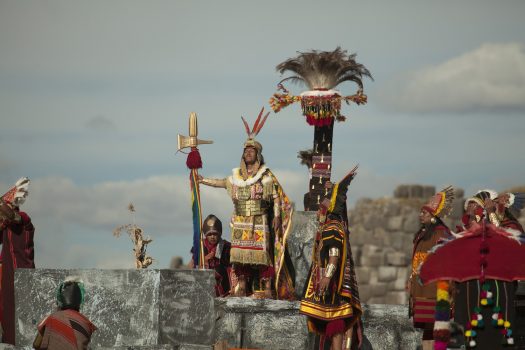 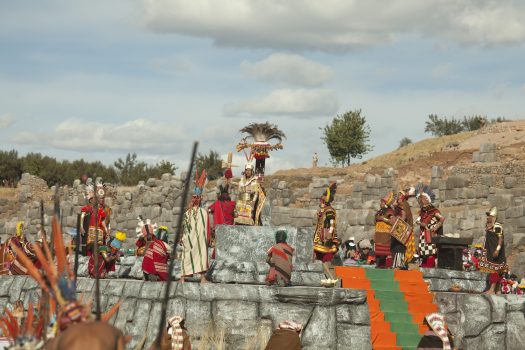 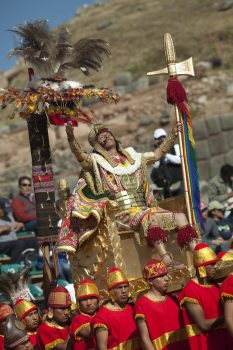 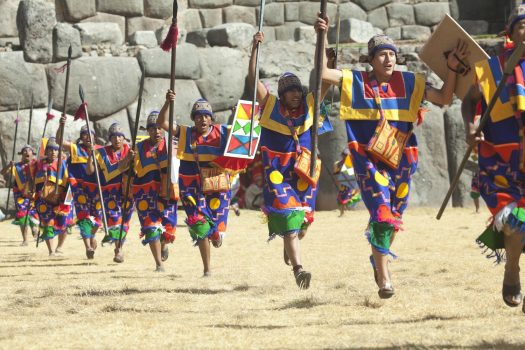 Although this festival has become rather commercialized and contrived in recent years and has nothing on the authenticity and splendor of Corpus Christi and other traditional festivals, we still think it is worth being familiar with the Inti Raymi celebrations because of their historical significance and importance to indigenous culture, and we generally invite our guests to pop by to have a glance at the ceremonies.  Please contact us to incorporate one of the many spectacular festivals in Peru on a trip here.

The Festival of Cusco Festivals: Corpus Christi Corpus Christi Festival in Cusco  The Corpus Christi Festival is Cusco's most important religious procession. The oldest religious festival in the Am...
Señor de los Temblores Procession in Cusco In a country with a depth and complexity of history as Peru, ancient and deep-rooted religious beliefs vie with the official national religion of Cath...
5 Ways to Enjoy Peru’s Independence Holiday Fiestas Patrias in Peru On 28 and 29 July each year Peru celebrates Fiestas Patrias, the national holidays to commemorate the country's independence....
Día de la Canción Criolla: A Celebration of Music and Dance in Peru Día de la Canción Criolla Before coming to Peru a few months ago, I had always associated October 31st with Halloween, candy, and spooky costumes.  H...
New Years in Peru: Traditions & Celebrations Some countries have one or two New Year's Eve traditions, but New Year's in Peru has traditions a dime a dozen. The night before welcoming the New Yea...
Santuranticuy Cusco Christmas Market The days before Christmas in Cusco are filled with equal parts excitement, holiday cheer...and crafts projects! Santuranticuy Cusco Christmas Market, ...
Tags: festivals in peru
Previous postPreview of El Mercado Tunqui | Boutique Hotels Cusco Peru
Next postAracari becomes member of ATTA: Adventure Travel Trade Association