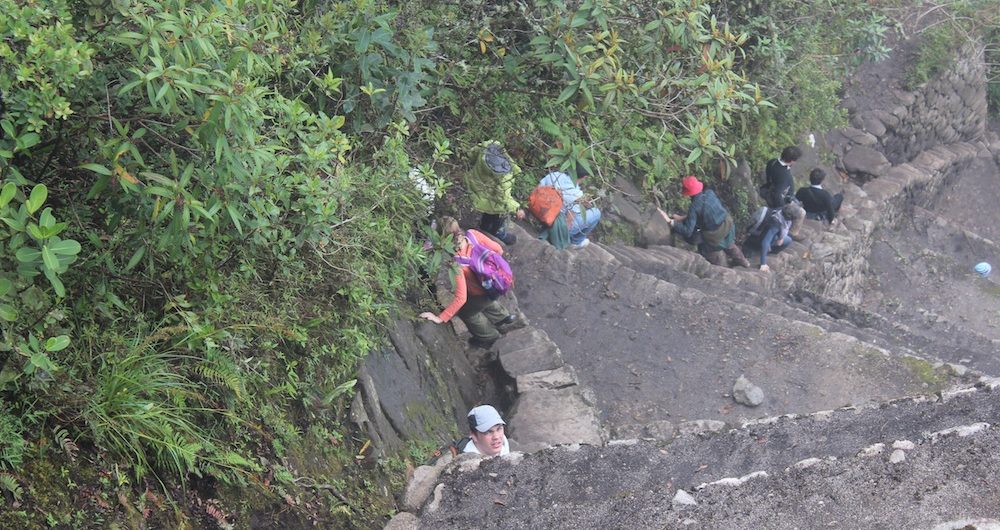 In every well-known photo of the Machu Picchu ruins is Huayna Picchu Mountain, standing majestically as if it were a watchful guardian protecting the sacred sanctuary below.  Its prominent peak rises from the depths of the valley and beckons for you to climb its winding, vertical path to the ruins that sit atop. For me it was through this trek and from this vantage point that I experienced Machu Picchu to the fullest.

Each day, only 500 people are allowed to make the journey up, providing every boldly adventurous trekker with a less cumbersome trail and with more room to maneuver and explore around the summit. Perhaps the most incredible aspect of this trek is the 360-degree view from the top, which overlooks the ruins, the snaking Urubamba River, and the lush mountainous landscape.

Due to the restrictions on visitor numbers to hike up Huayna Picchu, tickets must be purchased well in advance as they always sell out. You cannot buy tickets on the day, and the ticket is an addition to your main Machu Picchu entrance ticket. Entrance times to start the hike are divided into two slots, allowing 250 visitors in each. The first entrance slot is from 7-8am and the second is from 10-11am. The average time for the round-trip ascent and descent is three hours; note that you must exit Huayna Picchu by 1pm in the afternoon. When Huayna Picchu sells out, there are still sometimes tickets available to the alternative hike Machu Picchu Mountain.

One overcast and muggy day last January, Aracari team member James, his brother, his father, and I were among the intrigued and daring hikers to make the climb.  Entering through the main gate of Machu Picchu, we made our way across the face of the ruins to the entryway marking the beginning of the Huayna Picchu trail, and we were anxious to begin the hike we had heard so much about.  Despite the unfortunate weather conditions, our spirits remained high and carried our minds and our legs along the steep, treacherous path.  As we walked, we strategized the best way to conquer this trail, carrying on at a speed that was comfortable for each individual, and with one 18 year old, two 23 year olds, and a 50 year old, our paces were staggered. We stopped intermittently to wait for one another and to hydrate, offering a few words of encouragement or a joke to take our minds off of our aching lungs and legs — then we charged on.

As we walked, some hikers traveled in small groups and carried on full conversations, and while others embraced the challenge head on, keeping to themselves.  The terrain varied in width and difficulty, with steel handrails bolted into the rocks to help aid where the trail became a bit more treacherous.  Between the thick, dominating fog and the deep concentration it took to urge myself on, I hadn’t even noticed the abrupt and precipitous drop off the edge of the path.

Around an hour and 15 minutes later, we arrived to the summit. Fatigued from the journey, we explored the terraces and the ruins in the immediate vicinity, searching for an ideal place to rest and to wait for the fog to clear in order to view the ruins far below.

Disappointment slowly creeped in; I had waited so long, had pushed so hard to get myself here, only to be met with a menacing fog that shrouded everything that was more than a few feet away.  I sat staring blankly, until I noticed that I was surrounded with interesting and beautiful things. Embracing this unique opportunity, I spent the next half hour investigating, climbing in trees and bushes and looking for anything that captured my attention.  The dreary fog, rather than being a burden, became the eerie background for my photo-shoot, and the droplets of water served to enhance the subjects that I captured. Thoroughly satisfied with my exploration, I sat down and waited.

Cries of joy, whistles, and clapping awoke us from our daze, as the first break in the clouds was spotted!  We had our cameras at the ready, hoping for that one clear view of the ruins.  The clearing of clouds revealed the rushing river far below, the remnants of Inca walls and floating steps, and incredible views of the beautiful mountainous landscape. Yet the winds continued to push the clouds directly over the ruins, creating an ever-thickening wall of white.  We continued walking and happened upon the signpost marking the mountain. After stopping for a photo op, we continued on, climbing through the stone trails and walls and weaving our way back towards the side of Huayna Picchu that would offer the best view of Machu Picchu.

Again, we stopped and waited. Between moments of standing and peering into the void in silent reflection, we spoke with an elderly farmer from Argentina, who had incredibly made this trip for the first time in his life at the age of 72. Despite the language barrier, we gathered that this was a very special experience for him, one that called so strongly that he was willing to make the long and challenging journey to stand and breathe the heavy Andean air and to gaze upon the magnificent landscape that the Incas held sacred.

Acquiescing our fate, we began our descent through the ruins. Just as we set foot at the mouth of the trail, we were halted by enthusiastic whistling and cheering. There, in the distance, a window in the fog swirled open, revealing the ridge on which the ruins lay.  We stood, mesmerized, as the opening slowly traveled down along the face of the sanctuary, and for a brief few minutes, we fully understood what made this trek, this mountain, and this view so brilliant and memorable. Among the photos captured during this fleeting moment in time was a glimpse of the terracing and stone buildings and framed in the shape of the country in which it calls home.

A Special Invite to Hacienda Huayoccari in the Sacred Valley Are you pining for exclusive travel experiences? Do you want to connect with culture, community and craft from the comfort of your own home? Don’t mis...
Hacienda Huayoccari in the Sacred Valley Imagine visiting a Spanish Colonial hacienda in the Sacred Valley and having lunch hosted by the owners who love orchids, food, horses and collect Per...
5 Highlights of Paracas National Reserve Amid the striking coastal desert of Peru is the Paracas National Reserve, a protected natural area known for its wealth of marine wildlife and dramati...
The Simple Charm of Abittare Hotel in Cusco Find your hotel in Cusco A hotel can set the tone for your visit to a city, providing a canvas to paint your memories of the trip. When I visited Cus...
Visit to Kusi Kawsay School in Peru’s Sacred Valley By Caitlin, Photos: Caroline Maxcy Photography | On July 4th, 2012 I had the pleasure of visiting one of the most unique schools I have ever seen. It ...
Peru Travel Insights: The Last Refuge of the Incas, Vilcabamba Vilcabamba, the Last Refuge of the Incas The Inca’s last stronghold was at Vilcabamba. This refuge was founded by Manco Inca and it is here that the ...
Tags: adventure travel peru huayna picchu luxury travel peru
Previous postPeru’s Vibrant Candelaria Festival – Puno
Next postHappy Chinese New Year! An Introduction to Chinese Culture in Peru