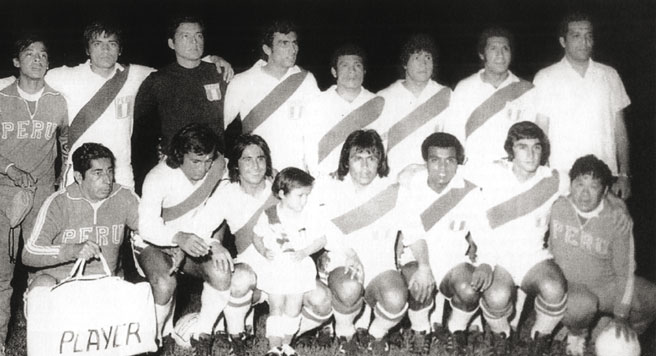 The last time that Peru won the Copa América was in 1975. This was the second of two triumphs that La Blanquirroja – or “The White and Red One”, Peru’s national soccer team – have seen in the most important international football tournament in Latin America, adding to their first success way back in 1939.

In the Copa América of 1975 Peru beat neighbours Chile, Bolivia and Brazil on their way to meeting Colombia in the final. After losing out in the first tie in Bogota they beat the Colombians in Lima before ultimately winning the final playoff match in Caracas, Venezuela. The game was won with a single goal from striker Hugo Sotil, who at that time played for Barcelona in Spain.

The victory came during a golden era for Peruvian Soccer. Featuring such stars as Sotil and the master Teófilo Cubilas, the team performed very well in two of the decade’s FIFA World Cups: they ultimately  lost out to Champions Brazil after playing strongly to reach the quarter finals of the 1970 World Cup. In 1978 they tied against eventual finalists the Netherlands while beating Scotland and Iran on their way to topping their group in the first round.

Peru will feature in 2011’s edition of the Copa América, which kicks off this evening in Argentina, and they face tough competition in the first round against group rivals Chile, Uruguay and Mexico. Their devoted fans will nevertheless be eager for them to progress the next round after a disappointing qualifying campaign for the 2010 World Cup in South Africa … they finished a lowly bottom out of 10 nations in the South American qualification pool winning just three games out of 18.

Peru kick off the tournament against Uruguay on Monday night at the Estadio del Bicentenario in San Juan, Argentina.

Las Casitas del Colca in the Land of the condor Check out our up to date information on Las Casitas, on the Belmond Las Casitas page!  A beautiful place in Peru Just 100 miles or a four hour car j...
Chachapoyas Archaeology: 4 Sites Not to Miss Aracari's pick of best Chachapoyas Archaeology The pre-Inca Chachapoyas civilization left behind many mysteries. While they had no written language, ...
Sacsayhuaman Ruins: Things to do in Cusco When travelers think "Inca," their minds immediately rush to images of Machu Picchu, the iconic ancient archaeological complex isolated amongst the An...
Things to do in Lima And if you are looking for things to do in Lima, the list is constantly growing.  The city is brimming with activity and is full of unexpected surpris...
Visit Lima’s secret garden: Another close friend will soon be delighte... Following a recent visit to the house of Naguib Ciurlizza, the Aracari team was delighted to learn that the distinguished host will soon receive our g...
The Khipu Blog Notice something different? That would be "The Khipu", our new look blog and monthly newsletter. There's always time for a fresh, new look. Through...
Previous postCorpus Christi Festival Cusco
Next postMachu Picchu Centenary Celebrations