Following our visit to the state-of-the-art Portón distillery, with an eye-opening lesson into the production of their delicious Pisco and a small, early-morning “liquid breakfast” of various mosto verdes, we continued to our next stop, Peru’s largest and most popular vineyard, Tacama, Ica.

Having previously sampled some of their wines including a consumer favorite Blanco de Blancos and knowing that Tacama was home to the oldest vineyard in South America, we were excited to see firsthand where these quality wines were coming from. Pulling into the main gate, we parked and walked down what would prove to be a deceptively pretty dirt path leading to what again, from a distance, looked like a beautiful and colorful hacienda. As we got closer, we immediately noticed the tacky plastic chairs outside and garbage strewn all over the tables and floor, the first of many polar opposites of our previous visit. We entered the waiting room and were told to have a seat and watch the “informational” video until there were enough people to warrant a tour. However, the overwhelming amount of static on the television, the inability to understand the video as it was in Spanish, and the misplaced and overused advertisements should have been a sign for us to get up and leave, avoiding the disappointments to come.

Exiting the waiting room and following our apparently uninterested guide (discussing wine shouldn’t be that much of a chore!) into the hacienda’s main cobblestone plaza, we immediately noticed how charming and beautiful the exterior of the facilities were. The plaza was lined with huge, old trees and in the distance, a majestic watchtower overlooked the property and it’s hundreds of hectares of grapes. Unfortunately, the inside bore no resemblance to the charming, yet deceiving facade. Through the large green wooden door into the production area, we were immediately overwhelmed by the off putting, foul smell. The lack of cleanliness and sanitation was abhorrent; grape must was left sitting out in the open uncovered, attracting flies that pestered us for the short remainder of the rest of our tour and left us with tons of bites, which served as a reminder to not drink Tacama for the following few weeks. We eventually were fed up with swatting away flies and decided the leave the vineyard without even tasting the wine. The presentation left us with such a metaphorical bad taste in our mouths that not even the finest French burgundy could begin to subside, so tasting what they had to offer (out of plastic cups mind you) was out of the question at that point. 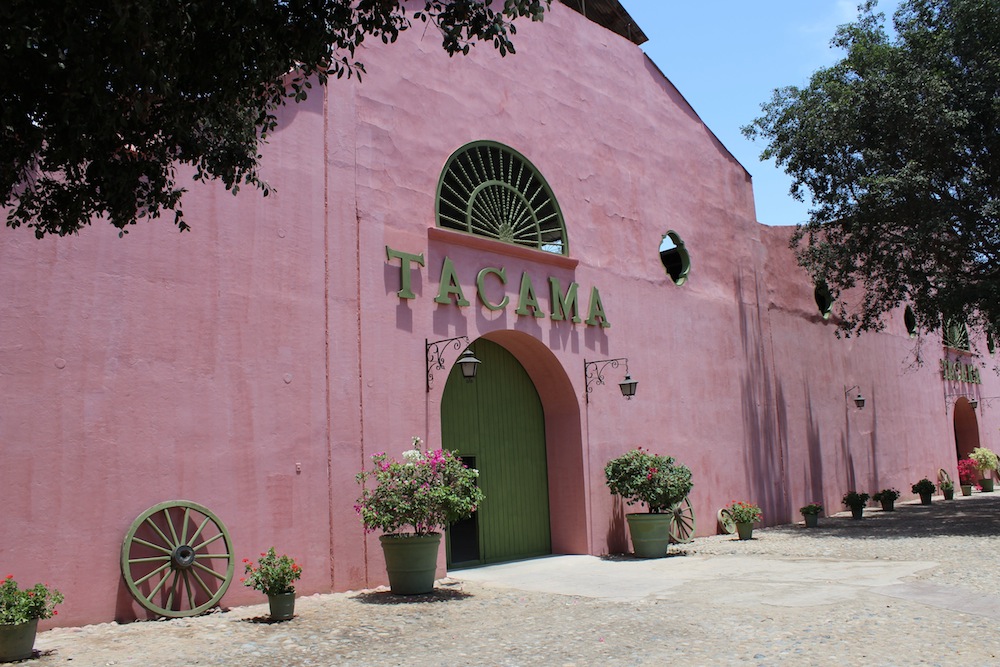 Having just come from the immaculate Pisco Portón distillery, we arrived at Tacama with excitement about the current state and quality of pisco and wine in Peru. Winemaking is an art, a delicate and pristine process that takes focused attention to detail, and these facilities were certainly not conducive to any of that. Whereas Portón was the epitome of this attention to detail, Tacama proved again to be the exact opposite. In the organization of their tours, the lack of enthusiasm about their product, and the unsanitary conditions, there was no pride in the presentation of such a historic winery. We left their facilities rethinking purchasing Tacama wines and piscos altogether in the future, which is certainly a shame, as those we had tried in the past proved to be very tasty – certainly among the best in Peru – and because the location and the traditional hacienda are very nice. The presentation of the product, the facilities, and tour could be so much better than what they are currently offering.

Fortunately, we had one more stop on our tour of some vineyards and distilleries in Ica, and with it, the excitement we had arrived to Tacama with was reignited. Stay tuned…

2016 Update: During a visit to Tacama by Aracari in April 2016 after they completed renovations, we saw an immense improvement in the property and quality of the tour. We are excited to recommend this new and improved Tacama to our guests.

Cusco Through the Lens of Martin Chambi Martin Chambi Photography in Cusco  Martin Chambi was one of the first prominent indigenous Latin American photographers known for his dramatic black...
Corpus Christi Festival Cusco Corpus Christi Festival Cusco Today's celebrations in Cusco mark the 464th uninterrupted procession of Corpus Christi in the Andean city. The celebra...
Luxury Peru Hotels: The latest developments In February last year we reported on the latest hotel news in our blog article Aracari’s rundown of up-and-coming hotels in Peru. Now it’s time to rev...
Arequipa’s Pisco Route Pisco is Peru’s national spirit and has been an integral element to Peruvian life and culture for more than 400 years. Outside the city of Arequipa, i...
Breathtaking Bolivia – 5 Unmissable Stops Bolivia is a mesmerizing and thrilling destination for adventure travelers. It boasts some of the most beautiful and diverse scenery in the world. Tra...
The Galapagos Safari Camp Family Suite Perfect for a Galapagos Family Vacation Following our recent blog post where we discussed the latest Galapagos Islands news with expert Santiago Mart...
Previous postLimo: one of the best restaurants in Cusco, Peru
Next postEaster in Peru: Ayacucho’s Semana Santa