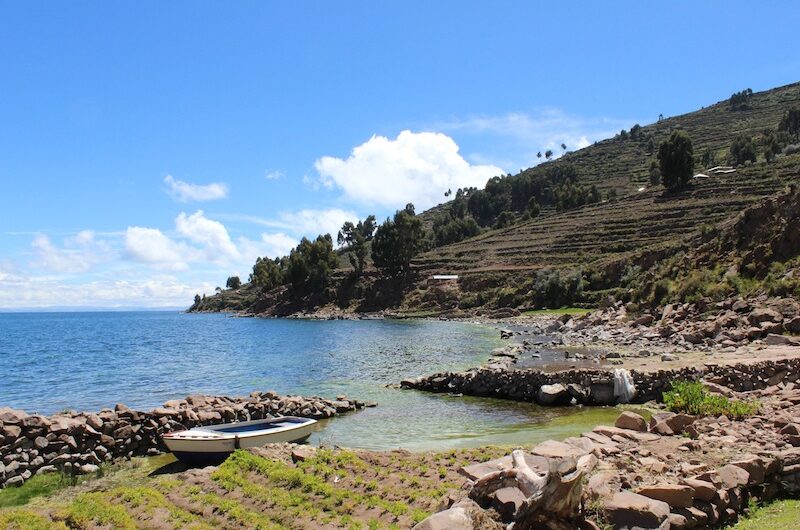 On a recent visit to the expansive and picturesque Lake Titicaca, James and I were rewarded with a visit to a community unlike any other that we had experienced before. Although much of the area is associated with inauthentic gimmicks aimed at attracting tourists, as Marisol described in her post, “Trip Report: Lake Titicaca,” we were afforded the opportunity to spend some time learning about the intriguing island community known as Taquile.

Departing from the pier in Puno, James and I traveled on a boat bound for Suasi Island Eco Lodge. The warm rays of the sun, the cool breeze of the lake, and the gently rocking of the boat were mesmerizing and complemented the tranquil views of the shoreline, the Andean ducks, and the passing boats. Following a two-hour boat ride, we arrived to the pier, where members of the community welcomed us with a handshake and a smile.

During our visit, our guide Maria, with the help of one of the community members, explained the various aspects of the Quechua-speaking people living here – people who are able to successfully fuse their ancient Inca traditions with modern technology.  We listened intently as they described the Inca communal laws which they live by as well as the rudimentary process of farming potatoes, quinoa, barley, and other agricultural products, yet we were shocked when Maria explained that the islanders opted to use solar energy as their power source.

There were also various demonstrations during our visit. One volunteer showed us how they use the natural flora to create a very important household item: laundry detergent.  They produced this powerful and natural cleaning agent by grinding a particular cactus in between two stones, yielding a frothy and green mixture that is then strained and diluted with fresh water from the lake.  Following a brief agitation of the grimy sheep’s wool in this mixture, our demonstrator pulled out a handle of the white, cottony fibers to reveal the transformation. 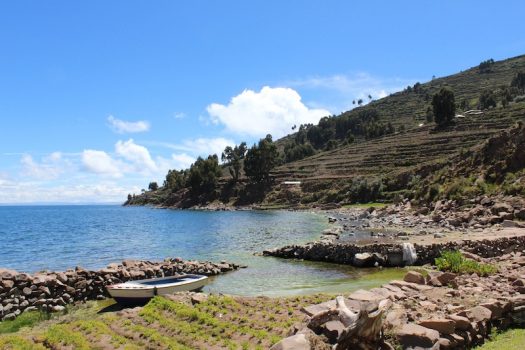 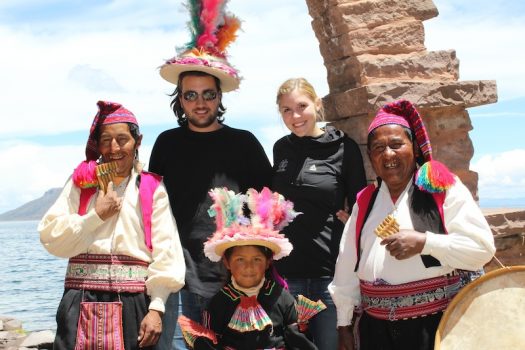 Perhaps the most impressive part of our visit was the textiles that the men and women produce there, with their intricate details and deeply symbolic colors and patterns.  Beginning at the ripe age of 7, girls begin weaving and boys knitting without ever using patterns, as their memorized handicraft skills would later determine whom they would marry, or not marry, in the future.  Each piece represented so many things to the artisan, and the knowledge and years of practice that was unfolded in each one was nothing short of spectacular.

Before our departure, two traditionally clad older men and a young girl delighted us with music and dancing, playing drums and flutes and spinning and dancing in unison.  Just as I was taking some shots of the action, the young girl grabbed my hand to join in!

Following a photo op and a look through the little shelf of handmade textiles for sale, we said our goodbyes to the Taquile community and headed on our way – aboard the roof of the boat.

Candelaria Festival in Puno Pays Homage to the Virgin of Candlemas The month of February is filled annually with festivities and carnivals in many corners of the world; Peru is no exception. The first two weeks of Feb...
Trip Report: Lake Titicaca By Marisol Mosquera Lake Titicaca experience I have visited Lake Titicaca a number of times, mostly on the Peruvian side but also on the Bolivian ...
Yavari – historic vessel on the move again Peru navy history I’d read about the famous Yavari and the fascinating story of the Victorian steamship that journeyed from the shipyards of London a...
Belmond Andean Explorer: Luxury Train Peru Last week I left the hustle and bustle of Lima and adventured south to begin a multi-day escape from Cusco to Lake Titicaca and Arequipa on South Amer...
Amantica Lodge Lake Titicaca: Calm and Serenity Our Head of Marketing gives her first-hand review of Amantica Lodge Lake Titicaca, having personally stayed at the luxurious private villa, located on...
Alpacas at Hacienda Mallkini Not many travellers arrive at Juliaca Airport without heading straight to Lake Titicaca, but this time was to be an exception. We were on our way to a...
Tags: Lake Titicaca
Previous postLuxury Travel Trends in Peru – A view of the last 5 years
Next postCelebrating Pisco Sour Day