On Wednesday October 31st the San Pedro de Apóstol de Andahuaylillas church – known as the “Sistine Chapel of the Americas” – was inaugurated after extensive work undertaken by the World Monuments Fund. This church can be visited on Cusco’s Andean Baroque Route.

San Pedro de Apóstol – along with San Juan Bautista de Huaro and Virgen de la Candelaria de Canincunca – is one of three noted churches in the area to the south of Cusco that conform to the style now known as “Andean baroque.” The churches were constructed by the Jesuits in the sixteenth and seventeenth centuries as a part of their efforts to convert indigenous people of the Altiplano to Christianity. They adopted traditional European styles that incorporated local materials and symbols of native plants and wildlife. The three churches form a circuit known as the “Andean Baroque Route” which is becoming increasingly popular among travellers for the investigation of this unique style of architecture. 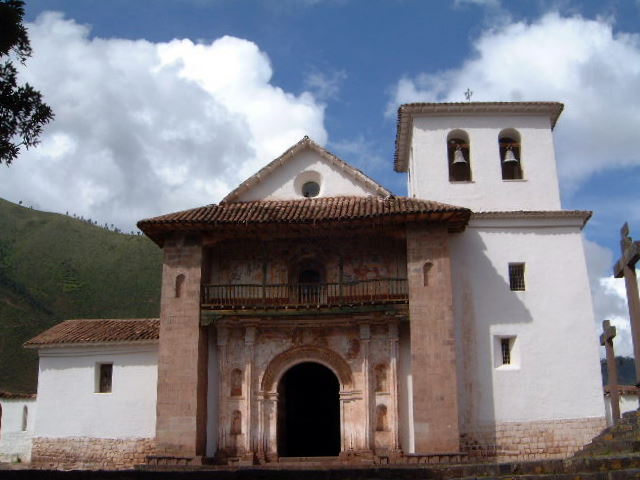 Notable figures from WMF in Peru and the USA gathered with dignateries and local people from Cusco and Andahuaylillas to mark the work that has been undertaken. They were accompanied by a group of WMF benefactors who came from across the world for the event, who travelled with Aracari on a private, tailormade trip. WMF began working in Andahuaylillas in 2008 following the inclusion of San Pedro Apostol on their Watch. The project focused on the restoration of the main facade, choir, chapels, and a youth training program designed to promote awareness of cultural heritage.

The ‘Sistine Chapel of the Americas’

Built at the beginning of the 17th Century, the interior of the temple is decorated with murals created by Luis Riaño, representing the path to glory and the path to hell. The church’s original organ has been recently restored and is fully functional. It is often touted as the “Sistine Chapel” because of the sheer elegance and beauty of its interior murals. The sanctuary also features a gold-plated wooden ceiling in the Mudéjar style.

Wednesday’s inauguration, it is hoped, will increase exposure for the area and support for the conservation of the churches. If you are interested in travelling to the region during your trip to Peru please do contact us, we can set up the visit with a specialist in colonial architecture.

Aracari specializes in private, tailormade trips to Peru. Contact us to arrange a guided tour of Cusco’s Andean Baroque Route as part of a bespoke journey to Peru with specialist guide Lisy Kuon, an expert in colonial art and anthropology in Peru.

Colca Canyon Churches Among the highlights of visiting the Colca Canyon in southern Peru are majestic condors, adventure activities like trekking, pre-Inca archaeology and ...
Corpus Christi Festival Cusco Corpus Christi Festival Cusco Today's celebrations in Cusco mark the 464th uninterrupted procession of Corpus Christi in the Andean city. The celebra...
Cusco Specialist Guide Dr. Jean-Jacques Decoster During a trip to Cusco, I had the opportunity to meet with Dr. Jean-Jacques Decoster, one of Aracari's top specialist guides who accompanies travelers...
Cusco´s Andean Baroque Route The Andean Baroque Route is a picturesque half day tour outside the city of Cusco which primarily focuses on churches that belong to the Andean Baroqu...
Traveling in Peru: the time is now In the week of May 17th, 2021, Aracari marked an incredibly special occasion. We welcomed our first guest since before the pandemic back for a luxury ...
Santa Teresa Monastery with Director Franz Grupp Arequipa is easily one of the most charming cities in all of Peru, home to gleaming-white historic buildings made from volcanic ash, sillar, grand rel...
Tags: cusco Peru church
Previous postDía de la Canción Criolla: A Celebration of Music and Dance in Peru
Next postKusyWasi Villa: A Private Alternative to Urubamba Valley Hotels