Things to do in Lima

Since I moved to Lima, I have been commuting every morning by bike. It seemed like a logical decision — the city is relatively flat, the coastal views are spectacular in the daybreak, and there are plenty of cycling lanes along the main veins of Miraflores. But up until September, I hadn’t had the opportunity to venture beyond my commute. I wasn’t sure where the best routes led or what the highlights were along the way. When I heard Aracari was testing out a city bike tour with Green Bike Peru, I jumped at the chance to participate.

We met bright and early at their office in Miraflores, where our guide, Milagros, was waiting. Milagros and her team set us each up with a water bottle, a helmet, and one of Green Bike’s branded bicycles, which are easily distinguished by their signature green frames. Milagros explained the safety procedures and hand signals in Spanish and English and we were off. 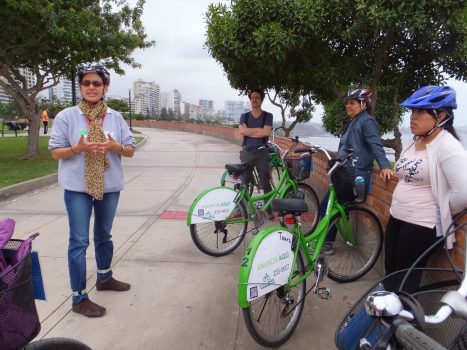 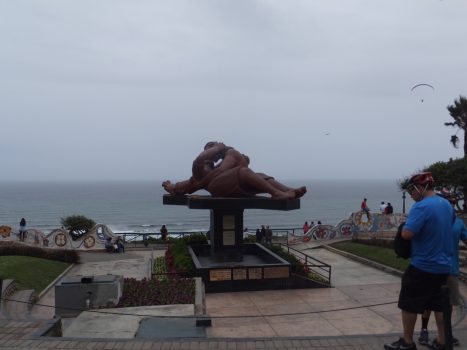 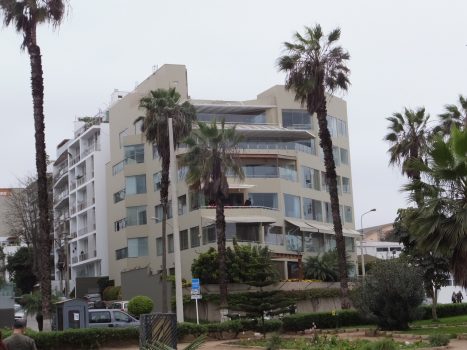 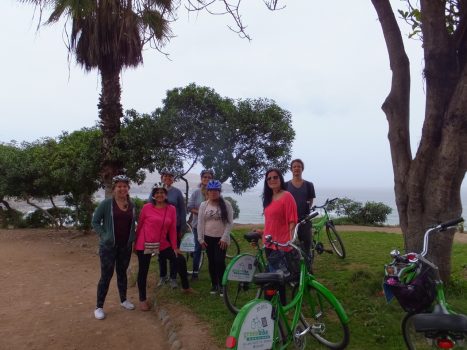 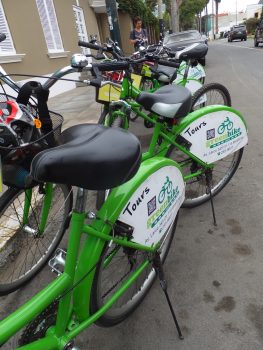 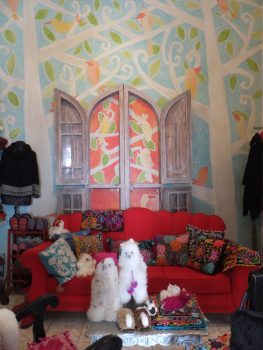 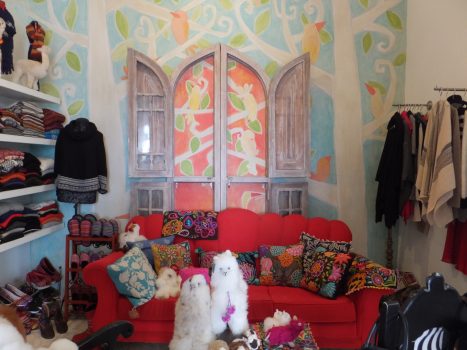 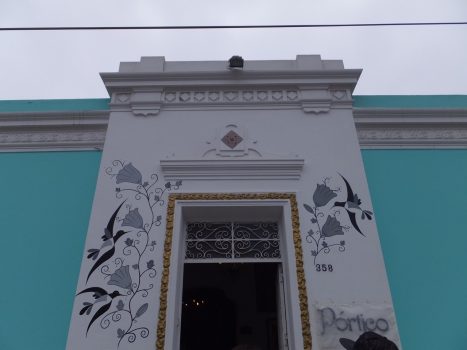 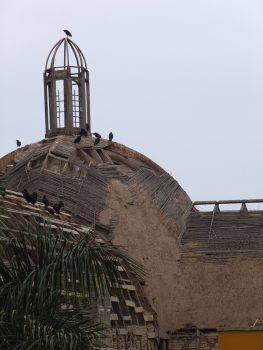 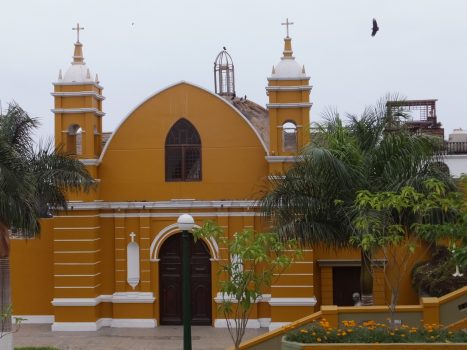 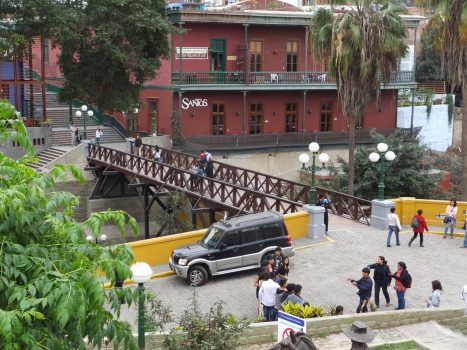 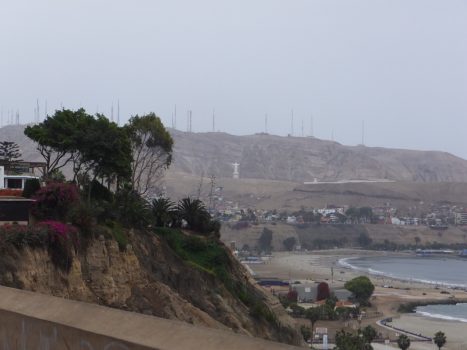 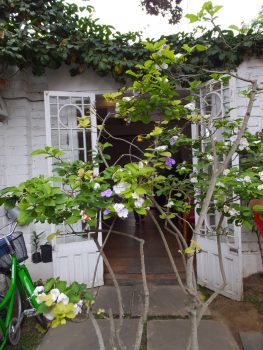 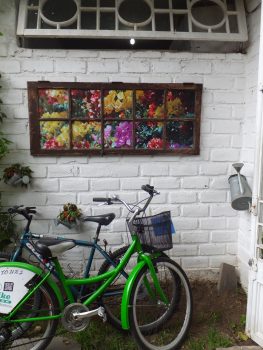 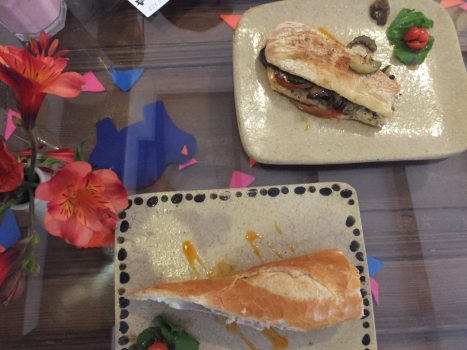 We chose the Southern Lima Beat package, featuring the bicycle-accessible highlights of Miraflores and Barranco. Milagros was friendly, funny, and knowledgeable. Her English was superb, save for the occasional grammar stumble. She and her partner, Francisco, were exceptionally conscious of keeping everyone in the group safe – Francisco trailed behind the last person to ensure that nobody was falling behind. With Milagros leading the way, we followed Pardo (the main stretch of my daily commute) out to the coast. The traffic was a little challenging as Ana, the tiniest member of our crew, was unable to find a bike that properly fit her. Every time she used the breaks, she would teeter; she fell three times, once on the shoulder of a busy road.

We then traveled down to the Malecon (esplanade), where the stunning Pacific Ocean vistas are punctuated with interesting pieces of limeñan art and culture. It is a little crowded at times — we were constantly dodging oblivious children and adults who didn’t seem to understand that the red section of the sidewalk with the little cyclist printed on it is for bikers. We stopped at the Miraflores Lighthouse for a brief lecture on the seafaring history of Lima. Then we went to the Parque del Amor to see the Victor Delfin statue, which is basically Peru’s version of the Klimt kiss. Milagros had a few funny stories about the womanizer that Victor Delfin is famous for being in his lifetime. «This is a depiction of him and his second wife…or was it his third?» she quipped. We continued towards Barranco and stopped at Nobel Prize winning author Mario Vargas Llosa’s house. His original property was apparently knocked down to build an apartment complex for his family, which stands today. Milagros joked, “I called him to see if he wanted to join us, but he wanted to sleep in today.”

We crossed over into Barranco and made our way to Portico, a lovely shop with quality Peruvian gifts. Portico is not a usual stop on the Southern Lima Beat route, but one of the members in our group wanted to pop in as we were passing and our flexible guides were more than happy to oblige. The shop specialized the kind of souvenirs people imagine you would bring back from Peru instead of the horribly cheap mass-produced tchotchkes that so often find their way into travelers’ suitcases. After ooing and aahing at the fine alpaca sweaters and hand-embroidered shams, we passed some of the classic churches in Barranco, as well as the Puente de Suspiros, or Bridge of Sighs. We also stopped in a hidden alcove behind an apartment complex that looked out onto the beach, sea wall, and the Christ statue. The houses and the gardens nearby looked like they were literally hanging on the cliffs. We chatted about how when earthquakes happen, these properties run the risk of toppling into the sea below — hardly a safe investment, it seems.

The tour package also included a “snack” including a sandwich and emoliente at Bodega Verde in Barranco. The sandwiches were scrumptious and the atmosphere was charming, with an open air courtyard and walls lined with art. Finally, after a long day out, we rode back to the office in Miraflores, crossing many harrowingly busy streets along the way. Our tour ran one hour over the usual 3-hour itinerary, so we were all exhausted. When I finally arrived home, I crashed on my couch almost immediately. Though my knees ached and I could hardly keep my eyes open for a moment longer, I was delighted to have seen the city from a new perspective.

Travelling To Peru with Kids: The 10 Best Activities A family trip to Peru is sure to be exciting, educational and memorable. Peru offers a wide array of experiences, and there’s something to keep every ...
Your Guide To Shopping In Lima: Top Fashion And Art Hubs Are you a fashion-focused traveler? Do you have a taste for arts, culture, and all things style? Then Lima is the city for you. Lima’s ever-growing fa...
Astrid y Gastón: One of the Best Restaurants in Lima Peru Lima, Peru is often referred to as the culinary capital of Latin America thanks to its selection of the top restaurants in the region, and three of th...
“Food Is Life, Life Is Food” Pandemic Tales from Peru: Penélope Alzamora Whilst international travel remains largely restricted, Aracari is still bringing you inspiring tales of ...
Train from Lima to Huancayo Through the Heart of the Andes Lima by train Traveling by train has not lost its romance in Peru as the well-known scenic train rides to Machu Picchu and Lake Titicaca continue to ...
Autor II – a nod of nostalgia to Lima’s past Blog post update in 2016: Autor Estancia has been renamed Autor II, and is the sister property to Autor I,also located in Miraflores.  The best luxur...
Tags: Expert guide Lima Family Travel Lima
Previous postEvenings in the Jungle with Posada Amazonas and Refugio Amazonas
Next post10 Peruvian Gift Ideas