Stay onboard Steamship Yavari during a Lake Titicaca tour

Our testimonial in Lake Titicaca tour

Aracari discovered during a recent visit to Lake Titicaca that the Victorian steamship Yavari has now been fitted as a bed & breakfast.

The Yavari might not be your typical idea of what to expect while visiting Lake Titicaca, but it makes an intriguing stopover for those travelling in the region, and staying onboard the ship is a very unique experience for more adventurous travellers.

Built in London in the mid-nineteenth century, the steamship was ordered by then Peruvian president Ramon Castilla in 1861 in attempt to exert naval influence over the resource-rich Titicaca area; the funding came from the extraordinary economic boom that Peru had seen in exporting guana. One of two ships ordered it the time, its job would be to travel around the shores of Titicaca collecting minerals and natural resources. The two ships were constructed in England in kit-form due to the overland journey that would have to be made into the Andes, and each of the 2,766 pieces weighed the maximum capacity that could be carried by mule.

After construction, the journey from Great Britain to Lake Titicaca was an epic one. The Yavarri and the Yapura were first dismantled and packed -up before being shipped across the Atlantic, around Cape Horn to the port of Arica, which was at that point in southern Peru. From here it was taken by rail to Tacna by mules and porters to Lake Titicaca at 12,500 feet above sea level. 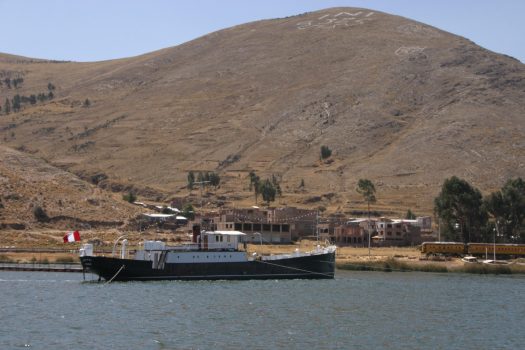 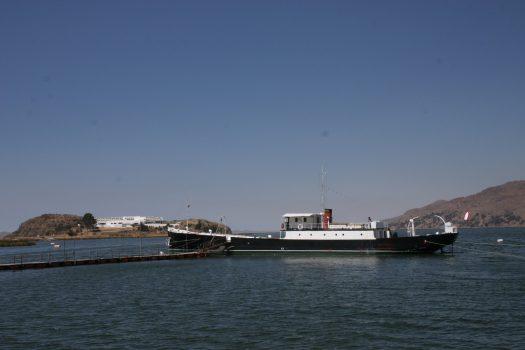 Despite only being around 400 kilometres, this remarkable journey ended up taking several years. Original estimates suggested that hauling the parts would only take 6 months, but as well as the route being marked with high mountain passes, barren desert landscapes and freezing plains at high altitude, the passage was marred with an array of setbacks, everything from arguments between the British engineers and local carriers to the occasional earthquake.

Nevertheless, the Yavari finally sailed its maiden voyage in 1871. It was active as a freight and passenger ship for a century up until it was abandoned in the late 1950’s. It was not until the 80’s that the ship was discovered rotting away in a Puno port. The potential for restoration was immediately realised, and by 1987 two organisations had been set up for this purpose, the Yavari Project and La Asociación Yavarí. The ship was bought from the Peruvian Navy and work began.

Today the ship is considered to be an important heritage icon of the British industrial era alongside the likes of the Cutty Sark, Glenlee or Great Britain. It is in fact the oldest single propeller-driven iron ship that is still in operation.

If you would like to visit the Yavari during a lake Titicaca tour with Aracari please get in touch; the ship is open daily for public visits between 8.00am and 5.00pm and other times prior to arrangement. The bed & breakfast can accomodate for seven guests in four cabins with bunk-beds.

The new and improved Delfin II Amazon cruise vessel relaunches This February Delfin Amazon Cruises re-launched its renovated, 28-passenger Delfin II Amazon vessel. Owner Lissy Urteaga oversaw the remodeling and de...
Luxury Amazon Delfin II Cruise Review Travel & Leisure calls River Cruising one of the "hottest new travel trends" in 2009 and with the launch of the new Delfin II river cruise; Peru ...
New to the Miraflores Neighborhood in Lima: Hotel de Autor (Autor I) Luxury hotels in Peru Blog post update in 2016: Hotel de Autor has been renamed Autor I, with the addition of sister property Autor II, also located ...
Pisac Tour: Colorful markets & Ancient Ruins Tailormade trip Peru The Sacred Valley is replete with towns and villages influenced by both the ancient legacies and modern day life. Pisac, which s...
Authentic, Ethical and Sustainable Peruvian Fashion: Silvania With vibrant and colorful patterns based on pre-Columbian art and design, “Silvinia Prints” became an institution of fashion in Lima from its opening ...
The Best Fine-Dining Restaurants in Bolivia Bolivia has become one of the most exciting culinary destinations in the Andean Region. Creativity and innovation are leading the charge, with world-f...
Previous postPeru hotels review – New Suites of the Sol y Luna
Next post“Aracari took care of all the details and we thoroughly enjoyed the trip»: Praise for our Peru itineraries