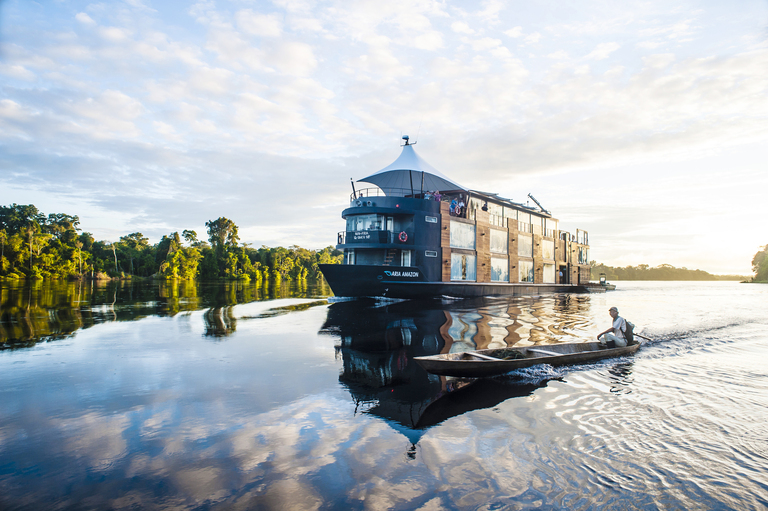 A visit to the Amazon Rainforest can be a transformative journey, allowing you to immerse in nature and experience the beauty of the planet’s most intense and diverse colors, smells and sounds as you encounter the exotic flora and fauna. Of course, the Amazon is a jungle and is not for everyone: it is hot and humid, it rains, there are bugs and mosquitoes—it is the wild at its finest! However, on the Aria Amazon cruise, you can experience the Amazon’s beauty in the luxury offered by a fine hotel. I recently went to Iquitos, in the Peruvian Amazon, where I began a 4 day, 3 night journey on the Aria cruise ship.

After a short flight from Lima, I disembarked to find the Aria staff waiting with a sign. The heat of the Amazon was intense—quite a change from Lima’s more temperate climate. From the airport, we travelled by land in vans (thankfully with air conditioning) on a paved road about two hours to Nauta. We met our guide, Julio, who talked about the Amazon, the local communities and our journey on the Aria. At the pier at Nauta, we got on a motorboat to get out to the Aria cruise ship. We were twelve people in total, a mix of Peruvians, Americans and a Japanese family with their 8-year-old son.

On board the ship, we were greeted by the cruise director and then shown our rooms before the briefing in the lounge. Inside, the Aria looked like a luxury hotel with elegant, understated decorations—it just happened to be a hotel floating along the Amazon River with views to prove it!

There are three decks. In the first or lower deck, there are eight staterooms and the embarkation platform. In the second or upper deck, there are eight more staterooms, a dining room, and a small boutique. In the third deck or observatory deck, there is a massage room, a small exercise area with a treadmill and an exercise bike, the bar, lounge and a sundeck with a Jacuzzi and some lounge chairs with sun umbrellas. Each of the air-conditioned staterooms has panoramic windows that let you enjoy incredible views and have amenities like iPod docks, plush beds, hot showers and top quality, organic bathroom toiletries. Though I personally prefer a more rustic ambiance when visiting the Amazon, you cannot deny the Aria its comfort and great customer service. Not to mention, you can get a massage at any time during the cruise, and the food is excellent, with wine, beer and all other refreshments included.

During the briefing we tried a welcome drink made of the Amazon fruit, camu camu, known for its incredibly high content of vitamin C. We did a safety drill in which the staff showed us how to put on our life vests, and then, we were shown to the dining room, where we sat down to a dinner of delicious Peruvian cuisine and locally produced wines. Before going to bed, we had a chance to take in a stunning night sky. I slept soundly in the comfortable bed with the peaceful sounds of the Amazon and the darkness of the jungle to lull me to sleep.

We had an early start the next day with a buffet breakfast served at 7:00am before our morning fishing excursion. We split up into two groups to go in skiffs to a point where we could fish. On our way, we spotted some birds along the shore and even saw some of the bottle-nose dolphins that populate the waters of the Amazon. We did catch and release fishing, and on our skiff, we caught a few piranhas. Unfortunately, while one of the guides was not looking, one of the women tried to throw back what she thought was a regular fish only to discover that it was a tiny piranha that bit her wrist on its way out! Luckily, she was just fine, and the onboard paramedic took care of her immediately.

After the excitement of our fishing excursion, we returned to the Aria and had a lunch of Italian food served with wine, coffee and herbal teas. We had some time to relax, and some people chose to enjoy the Jacuzzi on the sun deck. I took advantage of the library on board to check out pictures of the Amazon wildlife and read a bit about the rainforest before our afternoon jungle walk.

We went in the skiffs to the start of our walk. Being that we were in the rainforest, it began to rain, so we put on rubber boots and ponchos provided by Aria staff as we tramped along the muddy path. A local guide accompanied us and indicated wildlife like a small poisonous frog, a red tail boa snake, huge termite nests, giant bullet ants and a tarantula. Termite nests, it turns out, can act as a natural mosquito repellent, which is great given that the warm, wet Amazon is a haven for pesky mosquitoes!

Later, we had the chance to go out in the dark to search for caimans, the crocodile-like reptiles of the Amazon that are most easily spotted at night. On our adventure out in the dark, we spotted white boa hanging from a tree just above a small bird that was asleep and about to become its dinner. Being out in the jungle in the night, when many of the nocturnal animals become active, was amazing. You hear all of the sounds of life flourishing there.

In the morning after breakfast, we went on the skiffs along the Yarapa River. It was much hotter and very sunny, so I wore a hat to keep my face covered—a necessary accessory in the Amazon! Today we spotted monkeys on the river bank and one cheeky Capuchin monkey decided to jump on board our skiff, trying to pick through our bags in search of a snack! He was cute but a pain to get back on shore. We also saw people along the river bank and docked to go visit a local village where we saw the giant water lilies, Victoria Regia, which are the world’s largest aquatic plants. Some locals were selling handicrafts, so some of us bought souvenirs before we returned to the skiff and went back to the Aria for lunch.

We participated in a culinary demonstration in which we learned how to make tiradito, a dish of raw fish marinated in a chili sauce and in this case, an Amazon fruit called cocona. Then we learned how to make a pisco sour and also how to fold towels into the fun shapes that we always found in our rooms: monkeys and sloths. Then we had lunch of Chinese-style Peruvian food before the afternoon outing to the Puerto Prado Village.

The village has an incredible view of the Amazon, and we spent time talking to children who lived there, asking them questions like “who is the president of Peru” to test their trivia skills with a prize in exchange. They were happy with the gifts that were practical items like colored pencils, toothpaste and toothbrushes—things that are useful for the locals who don’t have easy access to these items we take for granted. The boutique on the Aria sells little items like these that you can purchase as gifts. We all enjoyed our time at the village with the kids, and we then paid a local woman to bring us in a canoe to a dark lagoon that had minerals that killed the microbes. We got to swim in this warm, black lagoon, which made the little boy traveling on the Aria with us very happy!

When we went back to the Aria, we had a snack of nuts like sacha inchi, also known as “Inca peanuts” and a drink while we watched the sunset on the Amazon, making for the perfect end to our last full day in the rainforest. Before dinner, the crew played music for us, inviting us to dance and even playing a song in Japanese for the family on board, which was special and gave a jovial atmosphere for our last night on the Aria. 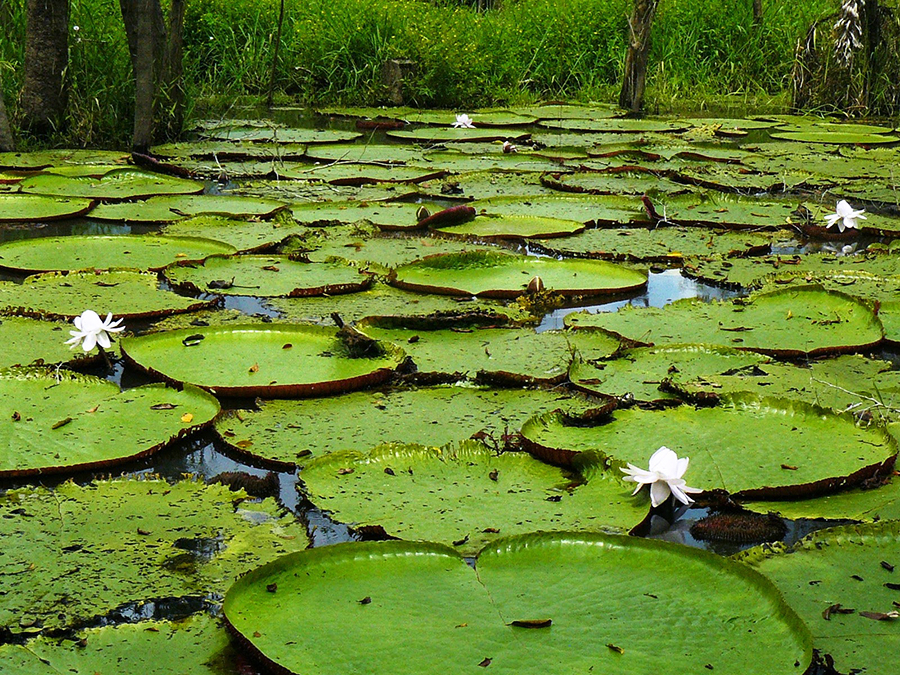 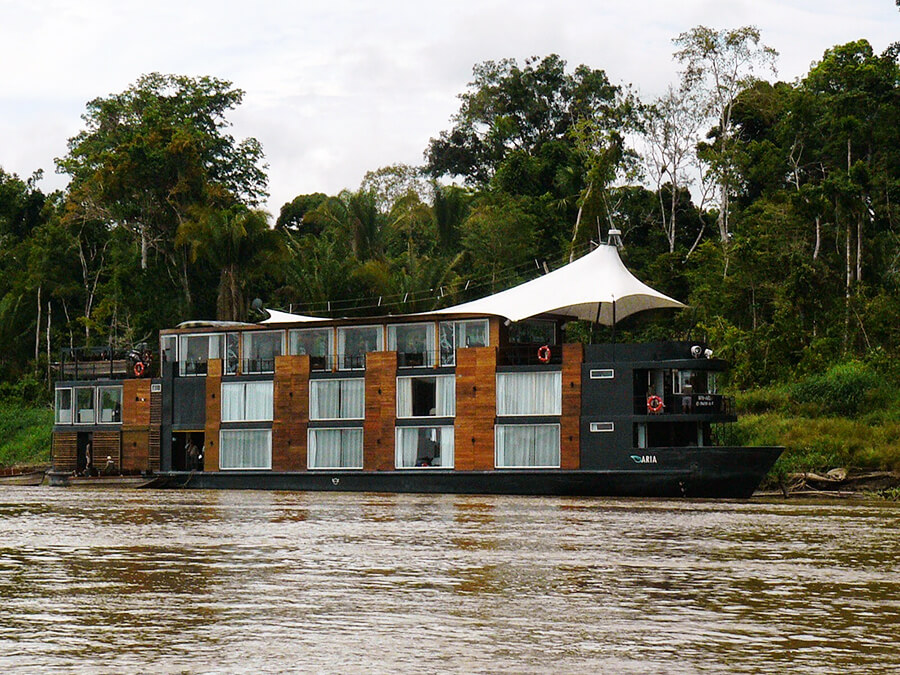 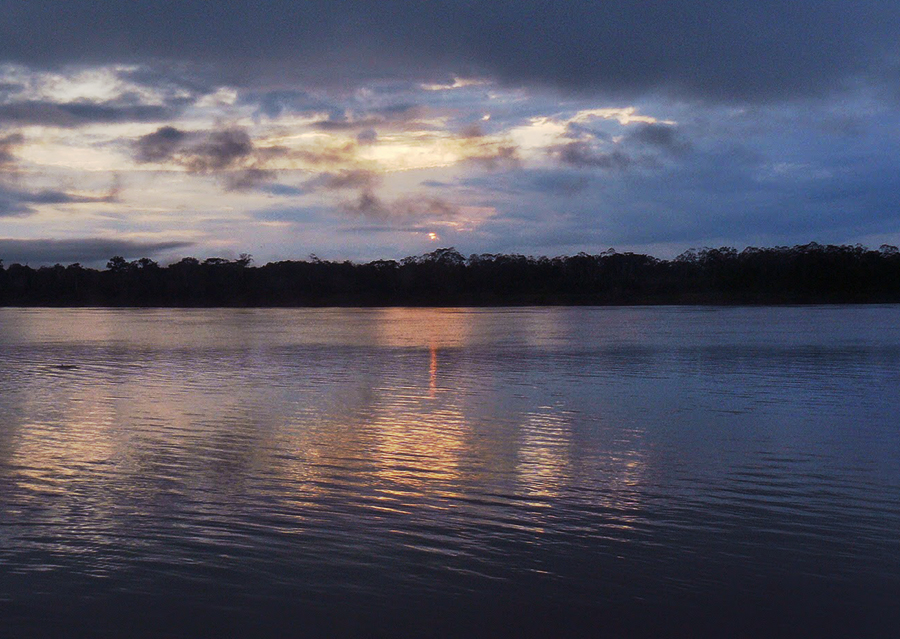 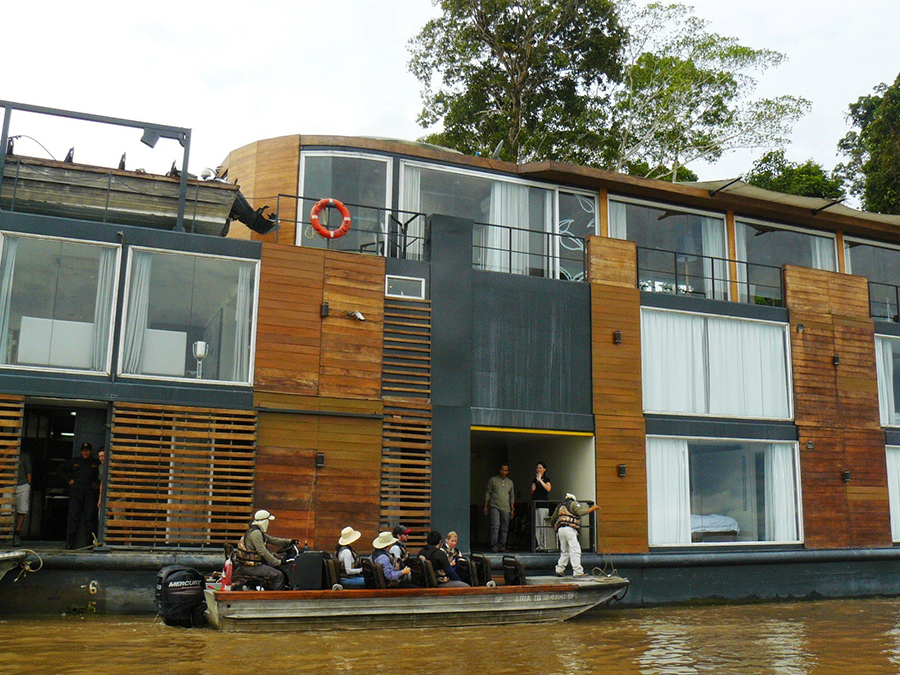 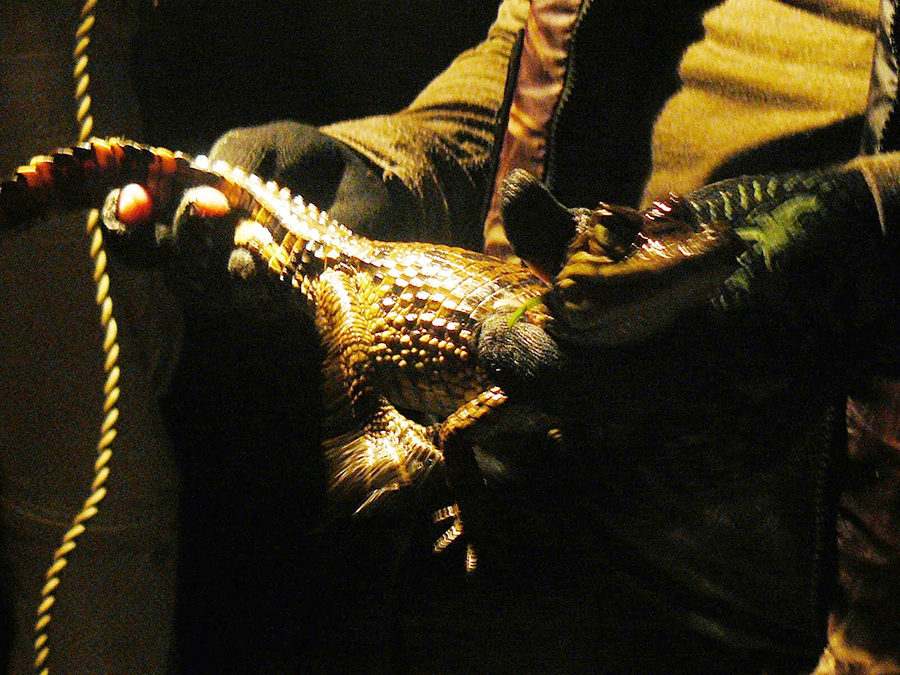 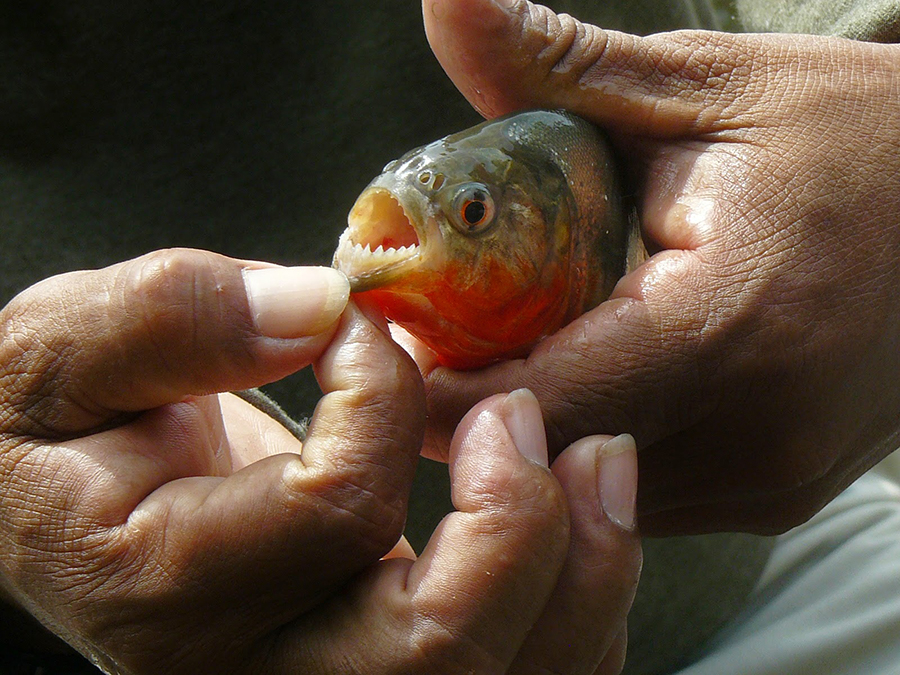 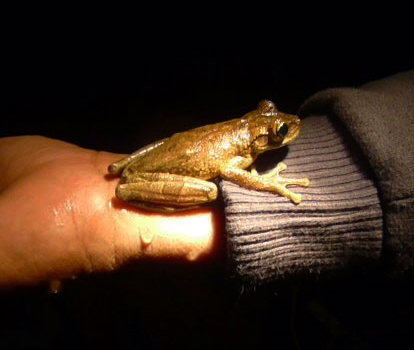 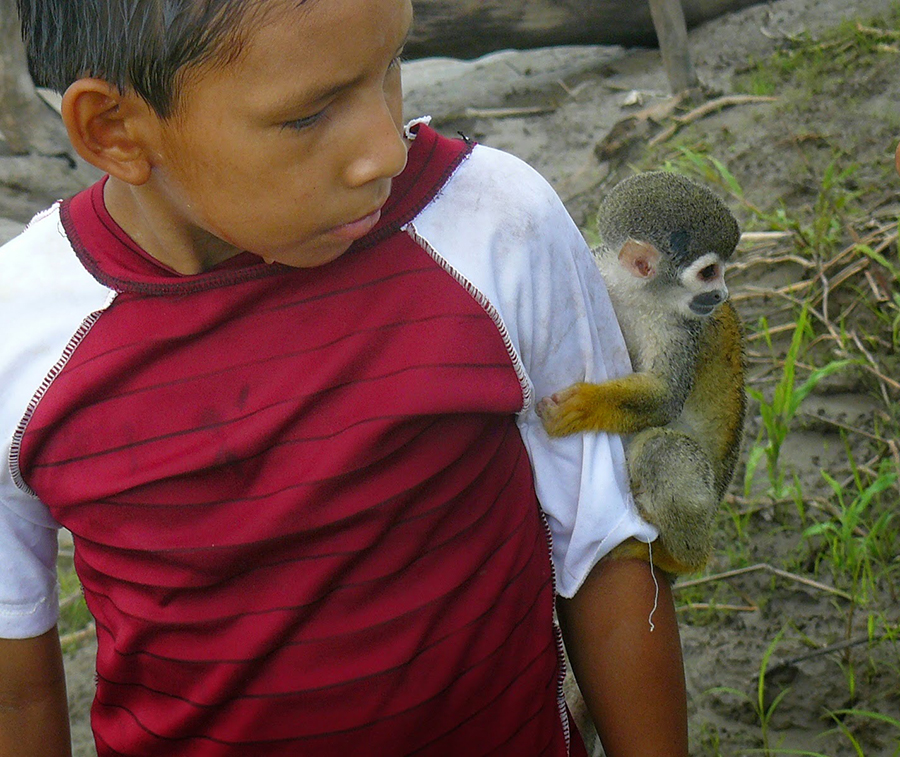 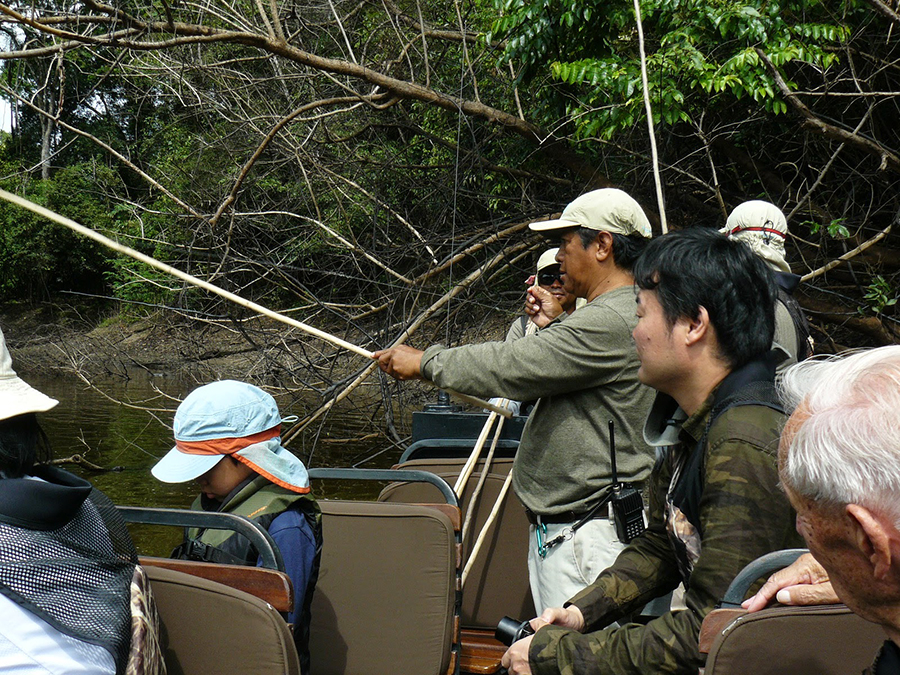 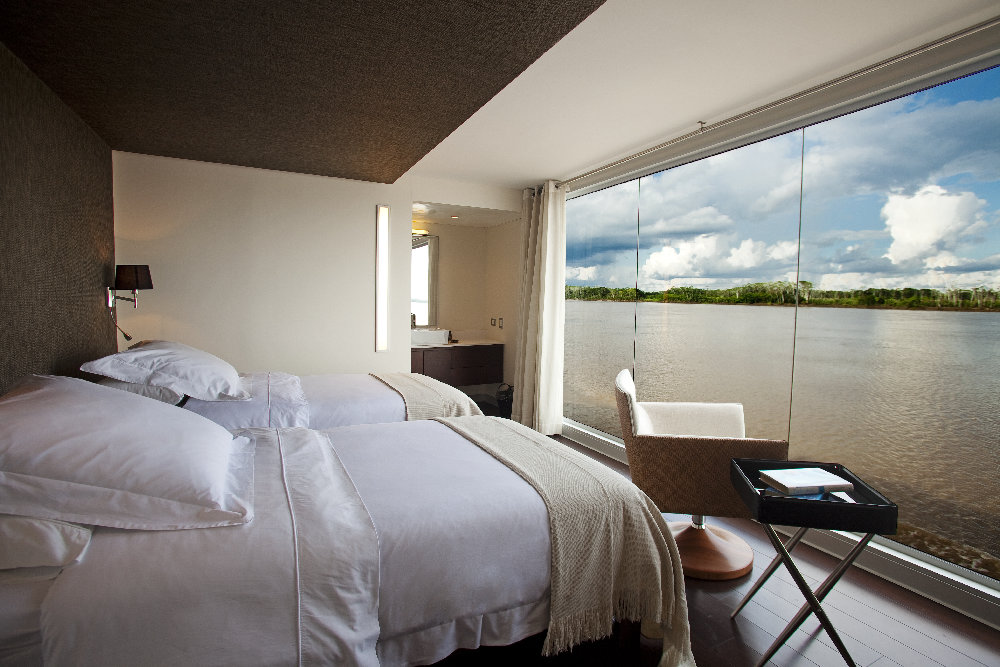 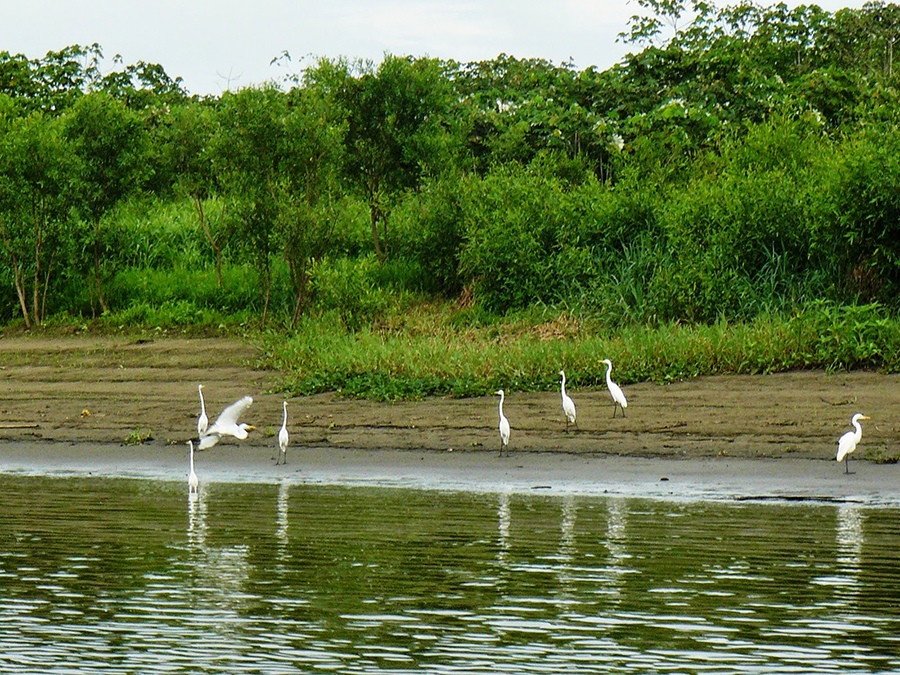 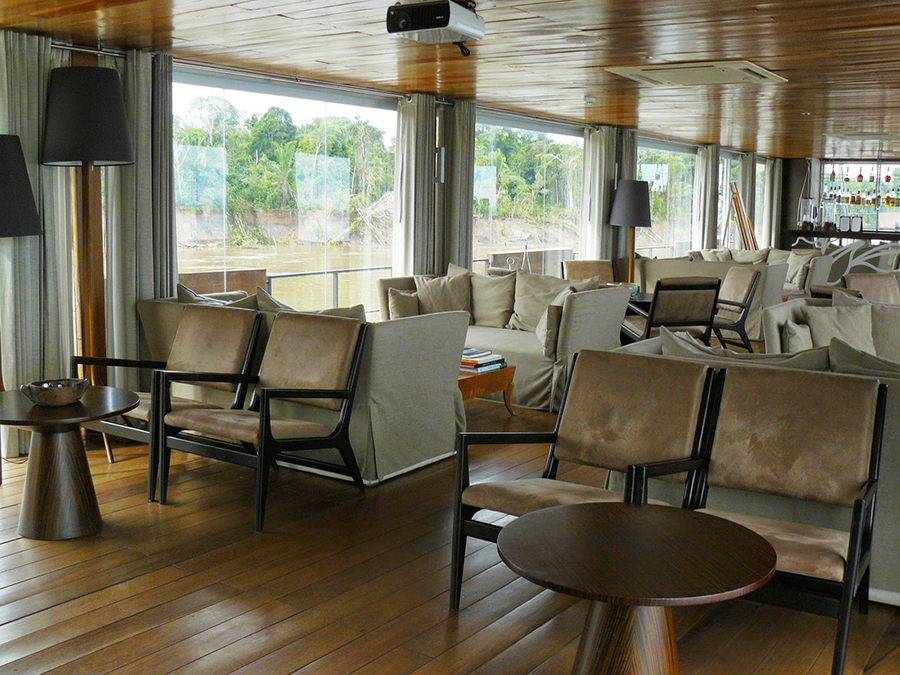 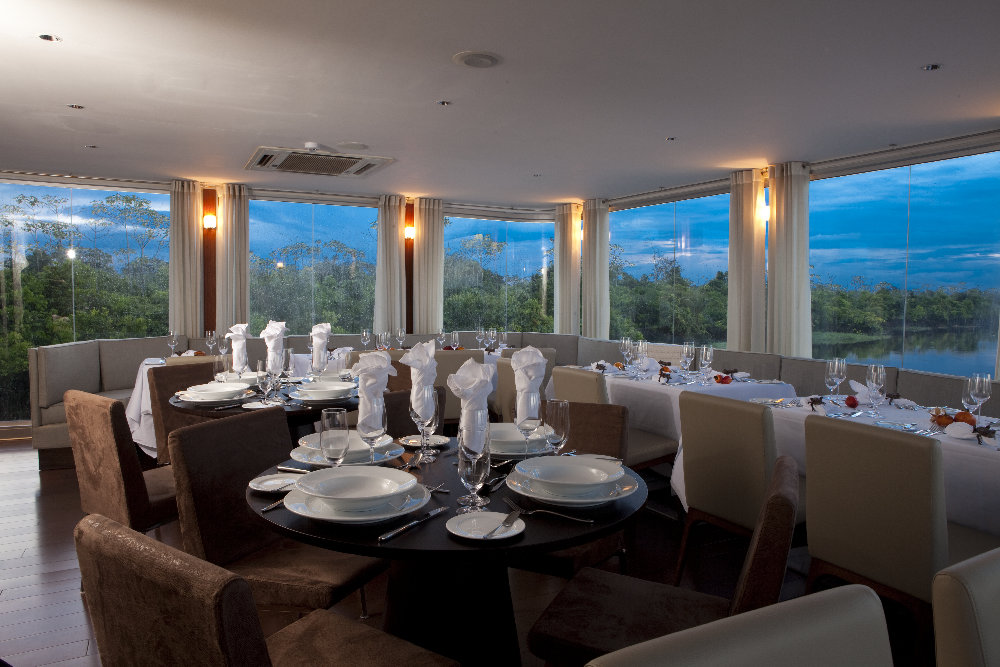 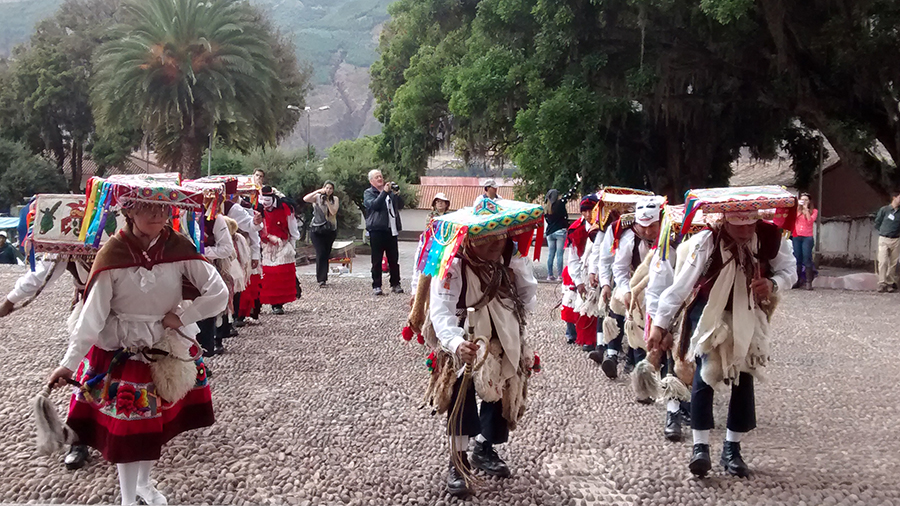 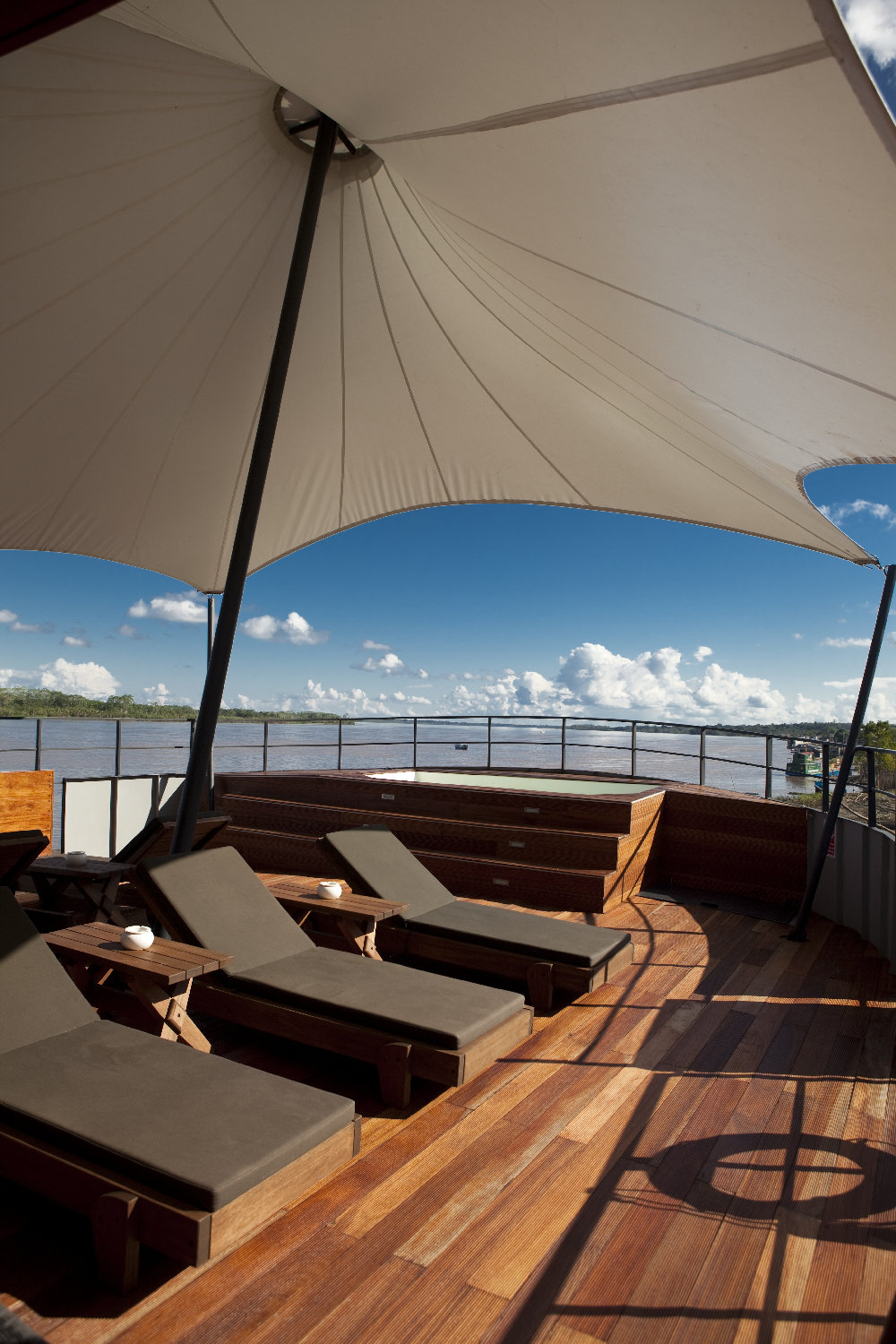 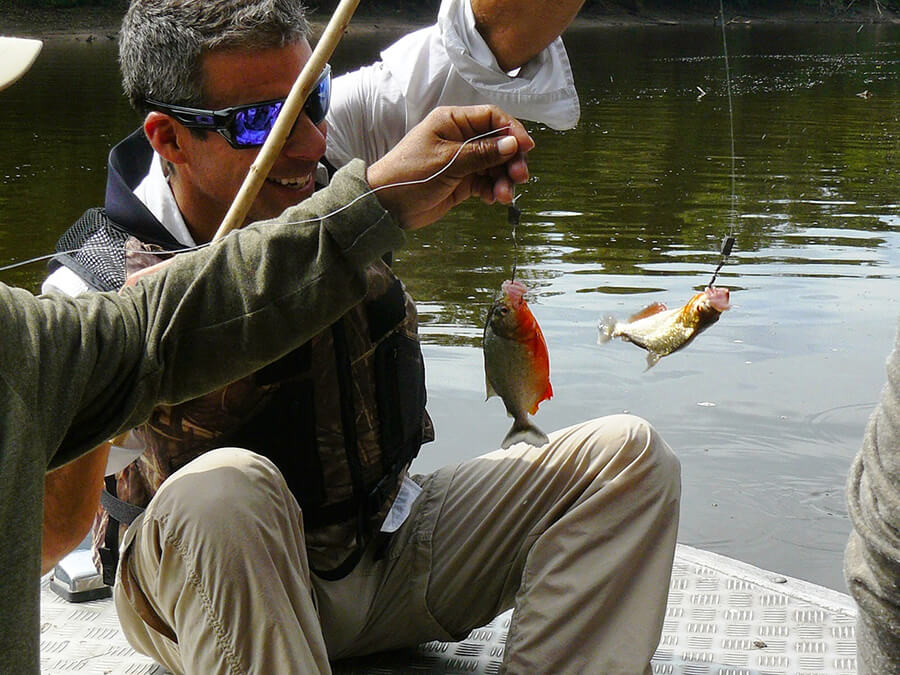 This morning I woke up early to try to catch a sunrise, but it was cloudy. Instead, I discovered bottle-nose dolphins playing near the ship, which was an even better surprise. A change in our flight meant that we had to depart earlier, so we said goodbye to the Aria staff, received a box lunch for the afternoon and transferred from the port to Iquitos. In Iquitos we went to the Manatee Rescue Center and fed the baby manatees from bottles, which was a beautiful experience! You can donate to the center at the end, which is worthwhile as they are protecting these majestic and endangered animals. After our visit, we transferred to the airport for our flight to Lima.

I was sad that my journey came to an end and would have loved to extend my stay on the Aria and keep exploring the Amazon! It was a wonderful experience, and the Aria crew and the local guides were fantastic throughout and really made the trip delightful for all of us, adapting to our needs and personalities quickly.

If you are interested in an Amazon cruise, don’t hesitate to contact us! For more information about experiences on luxury Amazon cruises, please check out the following articles: Marisol’s insider prespective: Delfin II – where Authenticy & Luxury converge on the Peruvian Amazon and 4 days / 3 nights on the Delfin I Luxury Amazon River Cruise.

Manu Wildlife Center: A journey to deepest, darkest Peru Manu Wildlife Center Review A few months back, in April, I ventured once again to the southern Peruvian rainforest and to the Manu Wildlife Center, l...
Wired Amazon, The Citizen Science Projects In the heart of one of the richest and most biodiverse regions on the planet, the Tambopata National Reserve, lies the most remote Amazon lodge in Per...
Sustainability In The Amazon The Amazon rainforest is the beating heart of our planet. The Amazon’s health correlates to the health of the rest of the earth. More than 20% of the ...
Aracari Conversations in June We have wonderful things happening in June. We would like to welcome you to our series of Conversations during the month of June. We have included su...
4 days / 3 nights on the Delfin I Luxury Amazon River Cruise Your Luxury amazon cruise By Marisol | This 4-day, 3-night journey on the Delfin I has vastly exceeded my expectations. I had travelled on the Delfin...
Macaw Project at the Tambopata Research Center A short boat ride from the Tambopata Research Center, a jungle lodge eight hours upriver from Puerto Maldonado, lies the largest known macaw clay-lick...
Tags: amazon Peru
Previous postThe Khipu Blog
Next postCusco´s Andean Baroque Route