The new Astrid & Gastón Lima officially opened its doors to the public today in the San Isidro district after a few delays and much eager anticipation. After various unsuccessful attempts to contact them about their new locale (we’re sure they must be inundated with calls), we decided to slip out of the office and head over there this afternoon to see what was happening for ourselves.

What we found was a pale yellow mansion with tall, white pillars lining the porch and an open staircase leading up to it. We saw some staff members bustling in and out of the building and several people dropping their cars at the valet service out front before disappearing inside the building. 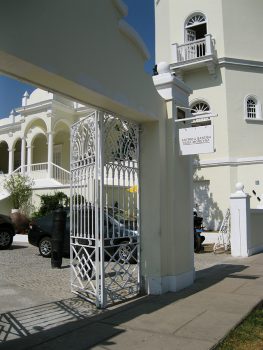 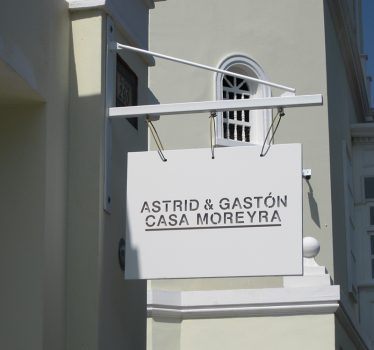 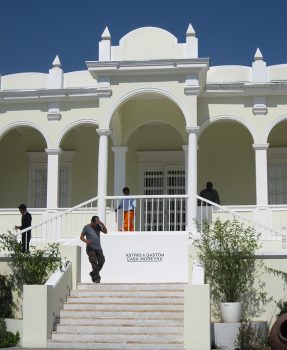 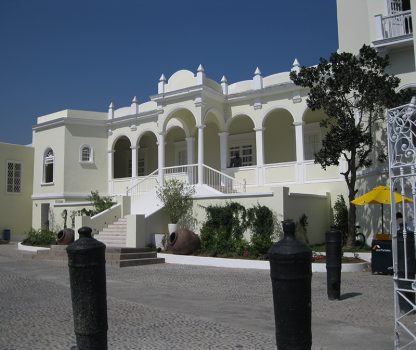 Not quite satisfied with what we gleaned about Casa Moreyra after our brief foray into the world of investigative journalism (and admittedly, paparazzi), we scoured their facebook page to find out that Casa Moreyra, as it has been presented, will be much more than a restaurant—more of a cultural center based around the theme of Peruvian gastronomy.

It turns out that Gastón Acurio grew up near Casa Moreyra when the estate was still lived in, recalling that it had a formidable presence, was a place that inspired fear and respect in the neighborhood, standing aloof with its high walls and closed doors. Now, however, Gastón and his team have spent two years restoring the mansion and have transformed it into a social and cultural center.

There are several, unique spaces, each with its own ambiance in Casa Moreyra, which are the Astrid & Gastón Restaurant, La Barra, El Cielo, El Taller, El Patio and El Edén.

The restaurant will offer three separate spaces for each dining option: the tasting menu, the à la carte dining space (La Barra) and the private venue (El Cielo). The gourmet tasting menu consists of 25 courses lasting three hours, the first called Virú and described as a journey across Peru.

Each space has its own atmosphere and decoration, its own kitchen and staff. There are 75 chefs hailing from all regions of Peru, ranging in age and all with big aspirations to be great culinary innovators. “La Barra”
La Barra (the bar) offers the à la carte menu, with tapas-like dishes meant to be shared over drinks. The space has a dining area, a traditional bar and an outdoor space where live music will be played. The cocktail and wine selection is expected to be top-notch. Notably, Julio Barluenga, the former sommelier of the restaurant El Bulli in Spain is part of the team at Astrid & Gastón and will select the best pairings for each dish and tasting menu.

El Cielo, which means “sky” or “heavens”, will be a space dedicated to private parties and events hosted at Casa Moreyra. There will be three options for culinary experiences in El Cielo that will be customized to each event and group that will have their own kitchen, bar, head chef and servers for their special occasion.

El Taller (the workshop) is a space for ideas and learning, where members of the community and those curious about gastronomy can gather to share culinary innovations and ask questions about Peruvian cuisine and products.

Conserving the original use of the patio of Casa Moreyra, El Patio will be a community space for cooking or wine tasting classes and will also double as a gallery space for local artists.

El Edén, recalling the Biblical garden of Eden that was abundant in food, is a botanical garden that recreates three climate zones of Peru: the coast, the Andes and the jungle. Here, a producer of Peruvian products will offer free classes to children between the ages of 6 and 10 about the rich food that the land provides.

If your interest is piqued, and you’d like to visit for yourself, reservations can be made by e-mail:

Top Lima Culinary Experience with Pedro Miguel Schiaffino Exclusive Lima Culinary Experience at Malabar The Aracari team were recently invited to Lima restaurant Malabar to test out an exclusive new private ...
Firing up the Best Pizza Around: Spizza Lima Restaurant Review Spizza Lima Restaurant Review Despite the ridiculously fresh seafood and a variety of tasty food options here in Lima, I’ve had a hard time finding s...
IK Lima Restaurant Review An upturned fruit crate might not be the setting where one would expect to enjoy a gourmet meal in Peru’s capital, yet this is precisely the concept o...
Tags: Best restaurants in Lima
Previous postA World Traveller’s First Impressions of Luxury Travel in Peru
Next postThe Sky’s the Limit: Visit Peru’s Finest Art Atop a Lima High Rise (and stay the night)