A marvellous exhibition of Peruvian textiles opened yesterday at the Centro Cultural Inca Garcilaso in Central Lima, Peru. Organised by the Fundación Museo Amano and Iniciativas Culturales del Peru, it brings together 22 works of the Amano Museum’s collection, which have been selected by the archaeologist Walter Alva and artist Carlos Runcie Tanaka. The museum foundation was established in 1964 by the famous collector Yoshitaro Amano, who promoted the preservation and scientific study of pre-Columbian textile art. 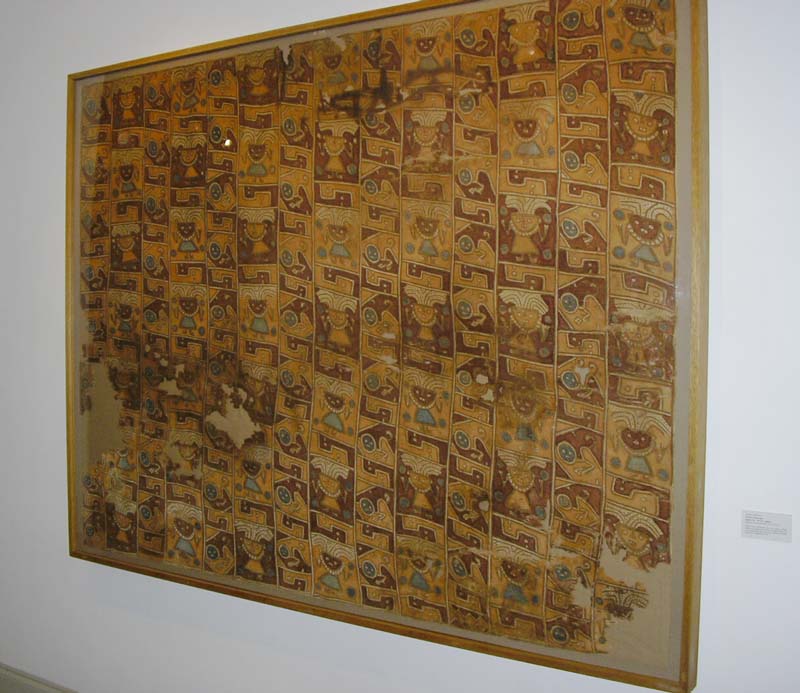 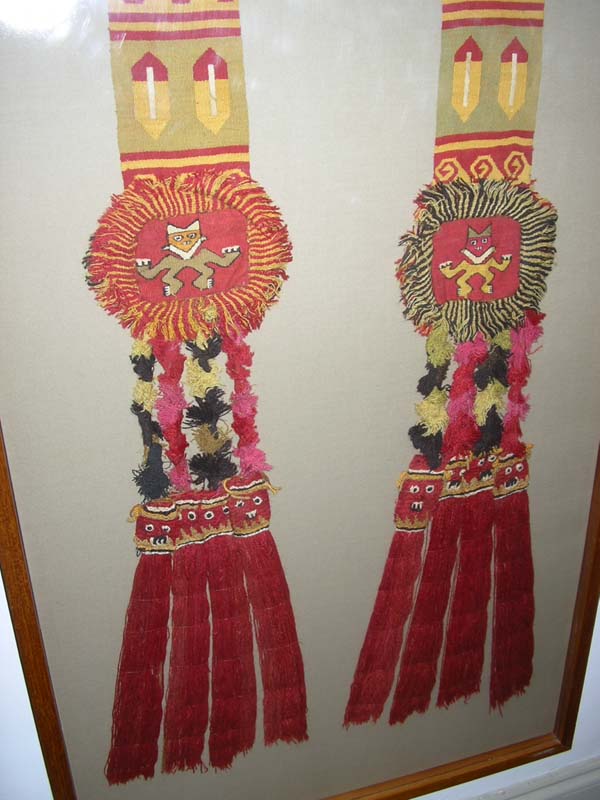 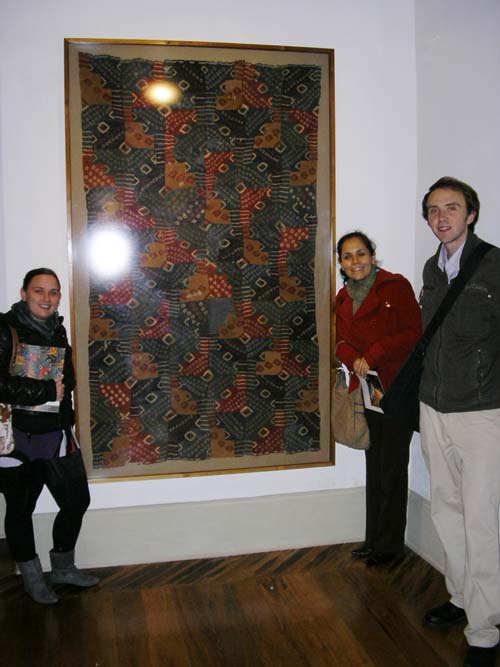 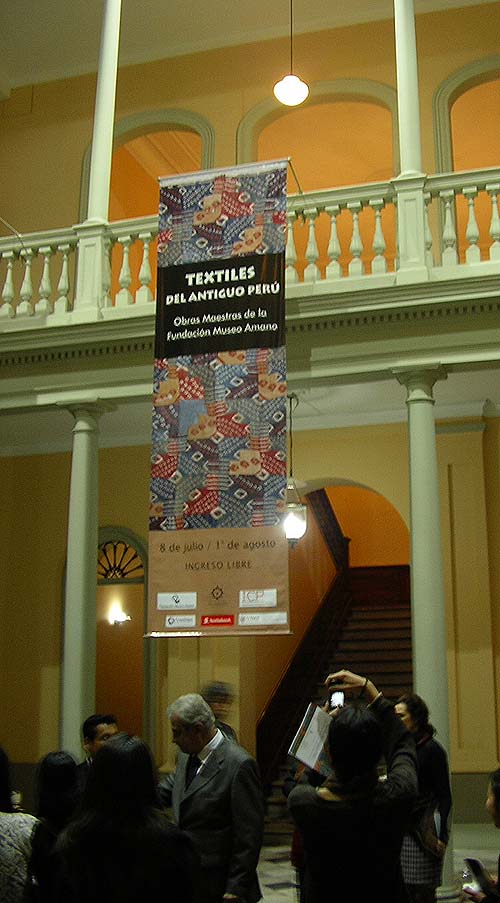 Having received an invite to the opening, members of the Aracari team went along to admire some of the featured works. The majority of these were from the Chancay culture, dating between the 12th and 15th centuries, though there was also a couple of examples of Huari textiles and even an Inca piece.

One Chancay work in the exhibition, a large tapestry made of cotton, has seen some wear and tear, but this does not detract from the amazingly detailed and intricate pattern interlacing anthropometric designs with images of birds. The colours, painted in negative, are of natural rich earthen brown and navy blue, and the images are separated and enclosed with bold lines.

Two more pieces of Chancay origin, this time a pair of tall ceremonial scarves made from llama wool and cotton, use a similar style of pattern running from top to bottom in diagonally composed sections. At each end of the scarves is a delightfully detailed motif with what appears to be eyes and teeth embroidered above each of the long, thin tassels.

But the favourite of the Aracari representatives was a large Huari tapestry of the most brilliant colour of dyes. The design features stepped crosses died in luminous primaries of blue, red, yellow and green in each quarter woven into one another, and animated with several rows of white circles emanating from the centre of each cross. The use of this stepped cross, known as a chakana, demonstrates that the shape was in use several centuries before its famed significance to the Incas. The whole work is an outstanding demonstration of the imagination of pre-Columbian textile artists in the Andes.

Textiles del Antiguo Peru – Obras Maestras de la Fundación Museo Amano will be showing between the 8th of July and the 1st of August 2010 and entry is free.

A Café Guide: Where to Find the Best Coffee in Miraflores Find the Best Coffee in Miraflores Happy Peruvian Coffee Day! The Ministry of Agriculture in Peru declared the 4th Friday of the month of August “...
Pisac Tour: Colorful markets & Ancient Ruins Tailormade trip Peru The Sacred Valley is replete with towns and villages influenced by both the ancient legacies and modern day life. Pisac, which s...
2014 Biennial of Photography in Lima Photos are big part of our work here at Aracari; it’s difficult to promote travel in Peru and Bolivia without stunning visuals. Not only do we often f...
Visit Lima’s secret garden: Another close friend will soon be delighte... Following a recent visit to the house of Naguib Ciurlizza, the Aracari team was delighted to learn that the distinguished host will soon receive our g...
Aracari’s New Look Aracari's New Website & Branding We are back after a few months of silence with our monthly newsletter, which I know many of you have much enjoye...
Firing up the Best Pizza Around: Spizza Lima Restaurant Review Spizza Lima Restaurant Review Despite the ridiculously fresh seafood and a variety of tasty food options here in Lima, I’ve had a hard time finding s...
Previous postAracari guest testimonials: “The only way to see Peru is with Aracari.”
Next postNew flights to Peru