On Tuesday night I ventured with my colleagues Giovanna and Vicky to the Alianza Francesa of Lima to listen to a talk about the gastronomy of Peru and France; one of the speakers at the event, writer and Peruvian culinary specialist Naguib Ciurlizza, had kindly invited the Aracari team to attend. The conference, titled, “Gastronomic Traditions, Culinary Creation and Marketing”, was the first event of the “Semana del Sabor” (or “flavour week”), and I did not know what to expect before arriving.

This year is the second annual Semana del Sabor, which runs from October 15 to 24 in the cities of Lima, Piura and Cusco. It is a celebration valuing the relationship between food and the five senses, which is sponsored by the Alianza Francesa of Peru and, in Lima, by the Franco-Peruvian School of Lima. As with the first Semana del Sabor in 2012, it is being headed by the Vice President of Peru, Marisol Espinoza.

As the website explains, Semana del Sabor aims to teach the value of the products native to France and Peru, demonstrating the diversity of flavors that these natural products offer. It also places emphasis on the origins and production methods of the products, as well as the importance of a healthy and balanced lifestyle. The four values that the Semana del Sabor promotes with its events are gastronomy, education, culture and social inclusion. This year the “flavors” selected for the week are quinua and cacao from Peru and, of course, the world-renowned wines and cheeses of France.

When we entered the courtyard of the Alianza Francesa, people were mulling around tables, sampling hot quinoa drinks, chocolates and cheeses from various vendors. Some sat down for a meal at the café that had been transformed into a restaurant. At the center of the courtyard a young woman, speaking in French, described a recipe of quinoa bread. I sampled a brownie made with quinoa flour and organic cacao from the nearby Bio Deli that left me tempted to buy the entire basket of them set out on the table.

We passed on to a table that had a giant, green fruit set beside various boxes of chocolates, and the woman selling them explained that it was a majambo, which is a relative of cacao that grows wild. The candies produced with the majambo are sweet, almost caramel-like with strong fruit notes. Everything for sale was fair trade and organic.

After tasting the offerings in the courtyard, we entered the auditorium to get seats for the conference. Photographers snapped photos of the attendees as they entered, illuminating the room with the flash. By the time the talk was to begin the auditorium was packed, and a hum of chatter (a mix of Spanish and French) welcomed the speakers as they entered and took their seats on the platform at the front.

Each speaker had a presentation on his experience with cuisine accompanied by a short speech. Naguib began with his presentation about his quest to discover pre-Columbian recipes, which he collected mainly by going to open-air markets like those of Ñame and Chosica and asking the vendors about how to prepare the products for sale. He emphasized that in Peru, an oral tradition thrives even today, and many recipes continue to be passed on generationally by word-of-mouth. His interest in studying pre-Columbian recipes was fueled by a statement in a colonial cookbook by the Countess of Potosí, one of the few books that mentions pre-Columbian cuisine, which condemns the Andean kitchen to merely offering papas con ají (potatoes with chili sauce). Naguib listed the many products native to Peru like strawberries, the cocona, pepino, calabaza (squash), wild guanábana (soursop), maca and more than fifteen varieties of bananas (for more information about fruits in Peru, check out our previous post: A Must Taste Guide to Fruit in Peru). Naguib’s list continued, drawing murmurs of surprise, at times, from the audience who listened attentively to his compelling picture of the diversity of ingredients incorporated into the Andean and pre-Columbian kitchen. For example, in Ayacucho they use ground leaves of avocado as seasoning and that the seed of the lúcuma fruit, called the “chestnut of Peru” by the Spanish, can be utilized to make a rich mazamorra (porridge). Papas with ají, it turns out, is only one of a vast number of dishes that were prepared before Francisco Pizarro ever landed on the continent. 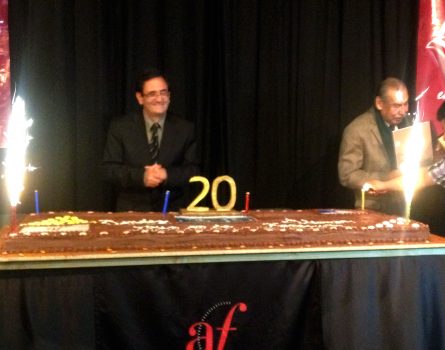 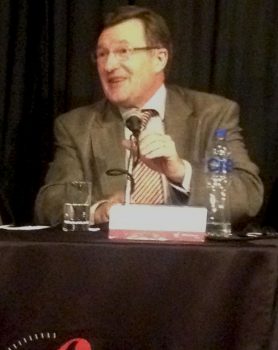 Jean-Jacques Beaussou presented next. Jean-Jacques grew up on a small farm in the province of Périgord in southeastern France and learned about food from his parents and grandparents. Jean-Jacques focused his presentation on his travels around the world. Through these travels, to Niger, Pakistan, Mexico, Cataluña Spain, and eventually, Peru, he discovered new spices and flavors, realizing the immense diversity and richness of culinary traditions in the world. One of his key points emphasized the history and travels that every recipe captures with its ingredients and manners of preparation. He proceeded then, to enlighten the audience with descriptions of several of his favorite recipes from his native land, France, like a dessert called tourment d’amour (agony of love) a light and rich pastry made with cinnamon, cream, eggs and rum in a manner that, well, as the name suggests, left all dessert-lovers in the audience salivating. He continued to describe the technique of confit, which was developed by farmers in France as a way to preserve meat before refrigerators and is now a delicacy reserved for the tables of gourmet restaurants.

Without delving into such savory recipes, Raul Vargas used his humor to spice up his presentation, which covered the history of the Peruvian potato, its arrival in Europe after the conquest, and eventually how it found its way into the pantries of international kitchens. Bits of wisdom stuck out in his speech like his observation that the discovery of a new dish gives man more joy than the discovery of a new star. He noted also that the potato, which originated in Peru, is easily the country’s greatest contribution to the world in terms of scope and impact. With nearly 3,000 varieties of potatoes known in Peru, it is no wonder than Peruvians are so proud of the many flavors, textures and recipes of their prized papas. Spaniards, and Europeans in general, were hesitant to place the potato on their plates when it first arrived in the 16th century. The Spanish even grew them in botanical gardens for a time rather than cultivating them for consumption. However, Raul continued, as history proves, the potato became a staple food across the globe, just barely staving off extinction in Ireland and bolstering Napoleon’s troops as they attempted to conquer the world. The long history would not be possible if not for the spectacular tubers grown and eaten for centuries by the Andean peoples of Peru.

At the end of their discussions and before questions were opened to the audience, Naguib surprised the attendees with a special treat, a bonbon with an outer shell of 65% pure cacao filled with a quinoa squash pudding and dusted with gold—to remind us that the treasure of Peru that the Spanish couldn’t strip away during the conquest is the incredible produce and recipes native to Peru. Mine was heart-shaped and melted in my mouth, leaving the unique flavor combination to linger on my tastebuds. I savored the post-taste as Naguib elaborated that there are more than 50 types of mazamorra in Peru, which were made before the Spanish arrived and sweetened with natural fruits and the Andean herb muña and a dried potato starch, called chuño.

When the conference ended, Paul Elie Levy announced another surprise that arrived in the form of a giant cake to celebrate the 20th conference at the Alianza Francesa. As if the attendees (Giovanna, Vicky and I included) weren’t already hungry enough after hearing about the delicious culinary combinations described, but we were in luck because the conference was followed by a reception with cheeses, breads, wine and of course, chocolate cake.

The events of Semana del Sabor continue until next Thursday with cooking workshops, discussions and organic fairs like those of the first night. If you are here in Peru and want to learn more about Peruvian gastronomy and pre-Columbian cuisine, Naguib Ciurlizza offers his expertise to interested Aracari guests, it’s even possible to sample some of his pre-Columbian recipes and be seduced by his meticulously prepared selection of desserts.

You can read about Naguib’s experiences with Aracari in more detail in the following blog posts:

Lima Bike Tour Things to do in Lima Since I moved to Lima, I have been commuting every morning by bike. It seemed like a logical decision -- the city is relatively ...
Trip Report: Desert, Lagoons and the Salar de Uyuni Peru trip report by Marisol Mosquera I have been to the Salar de Uyuni  and Desert + Lagoons area twice before, but it had been a while since I last ...
Perhaps Bolivia’s Finest Attraction for the Culturally Minded Tr... Chiquitos Missions Baroque Music Festival in Bolivia: April 24-29, 2008   Aracari has organized a tour to Bolivia to experience the Interna...
Three Wise Travellers on a Trip to the Holy Land Jerusalem and Petra were always on my bucket list, but somehow I never thought of that trip as travelling to the Holy Land, the name given to the area...
Authentic, Ethical and Sustainable Peruvian Fashion: Silvania With vibrant and colorful patterns based on pre-Columbian art and design, “Silvinia Prints” became an institution of fashion in Lima from its opening ...
Aracari is 15! (and how we celebrated) by Simon photos by Martin On September 23rd 1996 Marisol Mosquera started Aracari Travel with the vision of designing hand-crafted itineraries ...
Previous postA Visit to the New Gift Shop and Tearoom at Lima’s Cathedral
Next postHorseriding in Colca Canyon