Upcoming Events with The Anglo-Peruvian Society in London 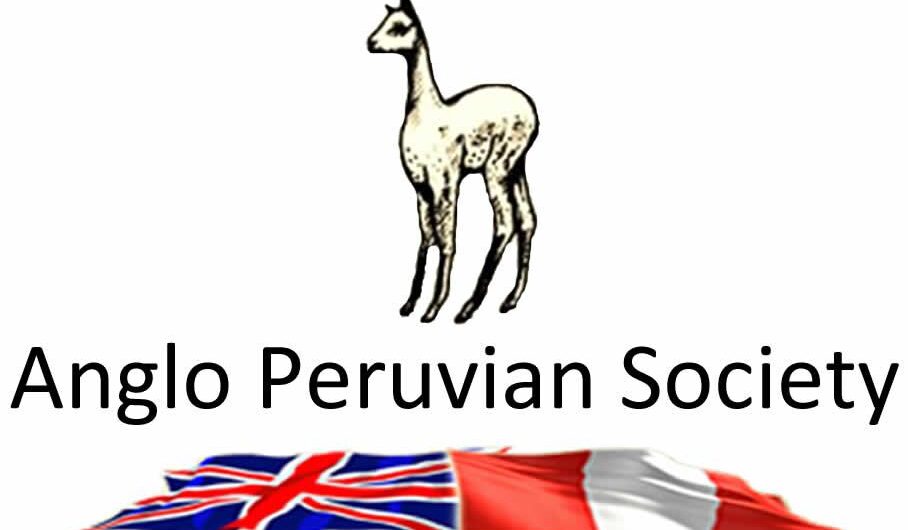 Whoever said that you can only enjoy Peruvian culture in Peru?! Founded in 1961 and based in London, the charity organization The Anglo-Peruvian Society aims to, “advance the education of the people of Great Britain about Peru, its people, history, language and literature, its institutions, folklore and culture and its intellectual, artistic, and economic life” and invites anyone, Peruvians, students and those who are simply interested in learning more to become a member.

The society meets regularly and hosts events that feature a myriad of aspects of Peruvian culture and society while also fundraising for charities located in Peru. At Aracari we follow the society closely (see here), and for those of you currently living in or visiting London, there are a couple of Anglo-Peruvian Society events on the horizon that may be of interest!

Firstly, in just a few weeks on Thursday, October 17th the society is hosting a Perudo Tournament that benefits Sense International, a non-profit that assists the deafblind in Peru.  Now, from what I can gather (and I don’t claim to be an expert), Perudo is an ancient South American dice game that can be played with up to six players who each get five dice and a cup. The players must roll their dice, keeping them concealed under the cup and make bids as to how many dice have been rolled by the other players (i.e. eight ‘4s’ have been rolled). Estimates can only increase. The tricky part is that players are allowed to bluff and force other players to overestimate the number! If another player’s bid sounds unrealistic, you can say, “dudo,” which means “I doubt” in Spanish. Once a player’s bid is in doubt, the dice are counted and a new round begins after a player has been eliminated. The last player left at the end of the game in the winner. To win, you’ll need a good poker face and some luck. The tournament will be held at:

For more details about the Perudo Tournament, check the activities page on the Anglo-Peruvian Society’s website. 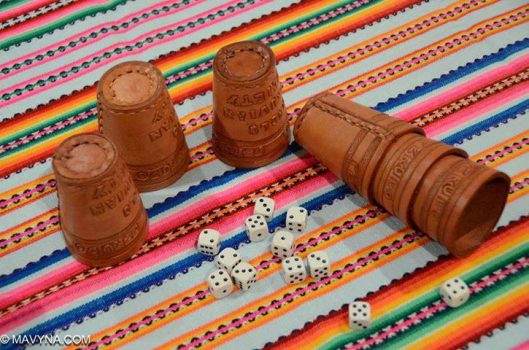 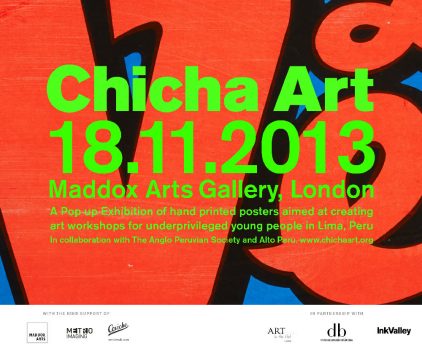 Then on Monday, November 18th, there will be a private viewing and silent auction at the Maddox Arts Gallery in London of hand-printed Chicha posters from Lima, Peru. Money raised at the event will support art workshops for underprivileged youth in Lima. To accompany the evening, there will be pisco sours and Peruvian canapés while guests peruse the gallery of the posters. Chicha posters are part of popular art in Lima that originated in the 1960’s to promote Chicha and Cumbia bands performing in the city. The posters are famous for their fluorescent typography, inspired by the vibrant palette of colors prevalent in Andean embroidery. The posters are handmade for each concert and each band by various Chicha artists and have become representative of Lima’s popular culture scene. More details are forthcoming on the Anglo-Peruvian event, but you can see their promotional flyer below!
If you are interested in becoming a member of the Anglo-Peruvian Society or what to learn more about them and future events, you can visit their web page at: http://angloperuviansociety.org/

(Having said all that, we do encourage you to actually come to Peru to experience Peruvian culture … try here: www.aracari.com/destinations/peru )

Aracari Peru Fam Trip 2016: Classic Luxury Peru A Taste of Classic Luxury Peru: Aracari Peru Fam Trip From admiring Machu Picchu on a perfectly clear day, to partaking in a traditional shaman cerem...
Embracing Art and Nature: Sculptures Along Lima’s Costa Verde Sculptures Along Lima’s Costa Verde Walking along the sidewalk of Malécon Cisneros in Lima’s picturesque seaside district, Miraflores, you will find ...
Aracari’s Latest Peru travel guides meeting in Cusco Aracari's Operations Manager Vicky has recently returned from Cusco after meeting with Aracari’s top peru travel guides in the region, one of several ...
Ronald Elward on Finding the Inca Descendants Ronald Elward is a Dutch expat and one of Aracari's specialist guides in Lima, leading visitors to the capital on a historical city tour, which showca...
A Private Visit with Sculptor Patricia Olguin Lima Art tour with Sculptor Patricia Olguin Long have women struggled to discover and understand their relationships with their faith, distinguishing...
On top of the world: Marisol Mosquera on Travel + Leisure A-List 2010 After being included in Conde Nast's list of the World's Top Travel Specialists in both 2009 and 2010, Aracari is delighted to say that the accolades ...
Previous postVisiting the Mario Testino Association in Barranco, Lima
Next postA Visit to the New Gift Shop and Tearoom at Lima’s Cathedral