Did the Incas have the wheel? Although the Incas were very advanced and did in fact know about the concept of the wheel, they never developed it in practice. This was quite simply because their empire spanned the world’s second highest mountain range, where there were more straightforward methods to carry goods than using the inca wheel.

In it’s heyday – right at the time of the Spanish Conquest in the 1530’s – the Inca Empire stretched all the way from northern Argentina to Southern Colombia, an area defined chiefly by high peaks, narrow valleys and barren rocky terrain. Carrying goods was thus far more convenient by porters and on pack animals, such as llamas, who were well attuned to traversing tricky mountain slopes with heavy loads…. far easier than dragging a wagon up a mountain I’m sure you’ll agree!

In order to make travel by foot easier, the Incas developed an extensive and complex system of roads for transportation and communications, which they called Khapaq Ñan. This covered the vast majority of their  Empire, the total length of road incorporated is thought to have been around 25,000 miles, the same as the Earth’s diameter. The most famous stretch of road is, of course, The Inca Trail to Machu Picchu.

At Aracari, as locally-based specialists in luxury travel Peru, we encourage you to try out the time-honoured tradition of navigating the Andes by foot and take advantage of the many incredible Peru treks available, from day hikes, to multi-day lodge-to-lodge treks, to the famous Inca trail to Machu Picchu.

Map of the Inca Road System

This fantastic map of the Inca road system comes from Wikipedia: 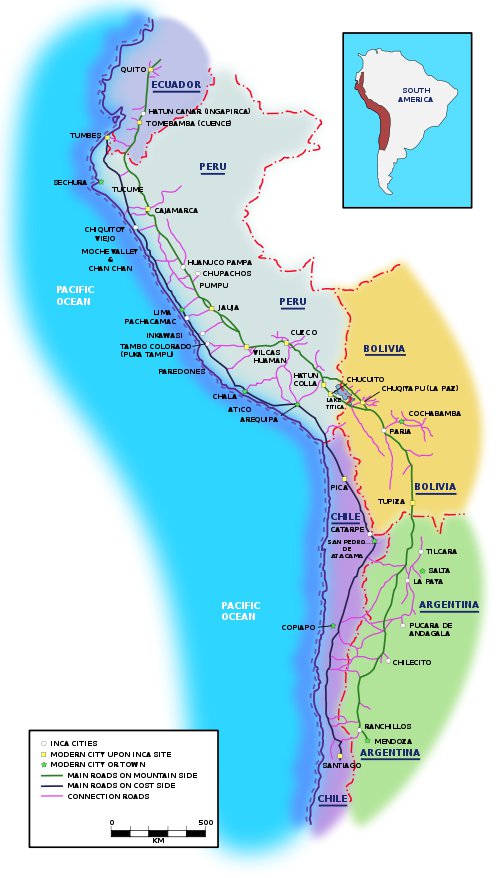 Christmas traditions in Peru Christmas in Peru, like many other parts of the world, is a time of great joy and celebration. And like many countries that have their own unique trad...
The Las Alasitas Festival In Bolivia In the mood to celebrate this January? You’re in luck: one of the most exciting Bolivia festivals, Las Alasitas in La Paz, Bolivia, is well underway. ...
Trip Report: 5 days in Cusco and the Urubamba Valley By Marisol Discovering Cusco and the Urubamba Valley There are so many new options coming up in Cusco and the Urubamba Valley - to stay the night, t...
Tucked Away in the Vines: Las Viñas Queirolo Hotel in Ica Following our visit to Tacama, we were wondering what to expect from Santiago Queirolo, another widely popular Peruvian wine and pisco producer.  This...
Moments that Made Aracari: celebrating our 25th birthday Longevity. In today’s competitive climate, longevity is a hard commodity to come by for a business, particularly a travel company – when with each pas...
Contemporary Art from Recycled Materials: Taller Huaringa studio Taller Huaringa, the studio of Lima artist Maricruz Arribas, uses only recyclable materials to create a fantastic array of artwork. Taller Huaringa L...
Previous postPeru Travel Insights: The Last Refuge of the Incas, Vilcabamba
Next postPeru travel Insight #3: Why Machu Picchu was never found by the Spanish.