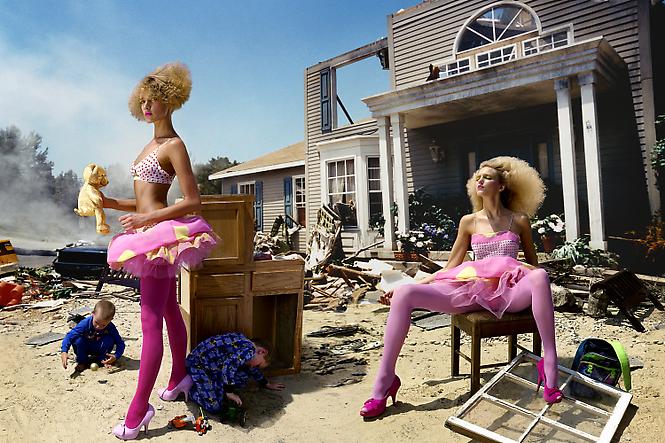 January 22nd was the inauguration of David LaChapelle’s photography exhibition at the MAC Lima, the Museum of Contemporary art in Lima. LaChapelle is an American photographer known best for his commercial and fine art photography although he also has directed music videos and created short films and a full-length feature. The exhibit is a condensed compilation of photographs from his career spanning from his first photographs in 1984 up until 2013. Two Aracari team members, Bianca and I, were lucky enough to arrive in time to find a place in the quickly-filling outdoor space where David LaChapelle was going to talk prior to the exhibition opening at 7:30pm. LaChapelle prefers to attend all inaugurations of his work because he feels it’s part of his job to be present–although he wants the photos to speak for themselves and for each to interpret them in his or her own way.

David LaChapelle is a fascinating character, from his slow drawl peppered with pensive sounds, chuckles and pauses, to the way he spoke directly and informally to the crowd, encouraging us to make our artistic mark on the world. Born in 1973 in Connecticut, he dropped out of high school and made his way to New York City when he was 14 years old. He got a job at Studio 54 and enjoyed a life surrounded by the party atmosphere of the art and fashion worlds of New York in the 80’s. In an attempt to finish high school, he had a brief stint at North Carolina School of the Arts where a photography course piqued his interest and he began shooting and developing film in a friend’s loft in the East Village upon his return to New York. His first photos were in black and white, experimenting with bleach, manipulating negatives and using light and nudity as themes. LaChapelle explained during that period in New York City, many of his friends were dying of AIDS and everyone was afraid of this new disease. He spent a lot of time pondering if we have souls and where we go after death. These early photographs are on display titled Good News for Modern Man and are part of a selection reminiscent of Italian Renaissance and Pre-Raphaelites.

An important influence on LaChapelle’s work was pop art icon Andy Warhol and he spoke very fondly of Warhol during the inauguration. LaChapelle’s work caught Warhol’s eye in 1984 and Warhol gave him a job at the magazine Interview, where his first photos of celebrities were published from 1984 to 1987. LaChapelle also happened to take the last photo of his mentor 10 days before his death in 1987. Only those close to him knew that Warhol went to church every Sunday and so LaChapelle set up the photo of Warhol in his office with a row of books behind him–a bible on either end. LaChapelle mentioned that the late 80’s were cruel to Warhol. Critics in New York didn’t appreciate his work the way those in Europe did. He was considered a 60’s relic and no longer relevant. However, after Warhol’s death, his dream came true: The Museum of Modern Art, in his hometown of NYC, held the largest exhibition of a solo artist in the history of the museum and it was an immense success, propelling Andy Warhol into pop culture idolatry. It is therefore quite fitting that LaChapelle’s exhibition of photos is showing at MAC while Film Portraits by Andy Warhol are simultaneously showing at MATE in Barranco through March 15, 2015. Some of LaChapelle’s works pay homage to Andy Warhol as well, including two photos of transexual model, Amanda Lepore, posing with bright-colored make-up just as the faces of Marilyn Monroe and Liz Taylor appear in Warhol’s close-up colorful prints from the 60’s. 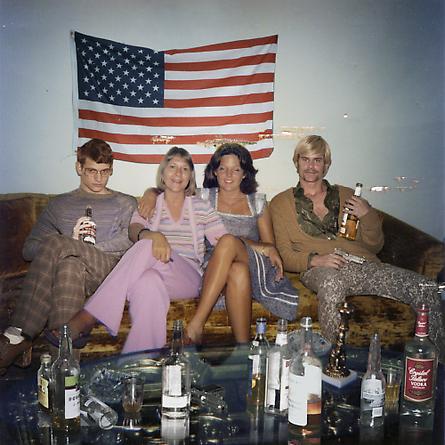 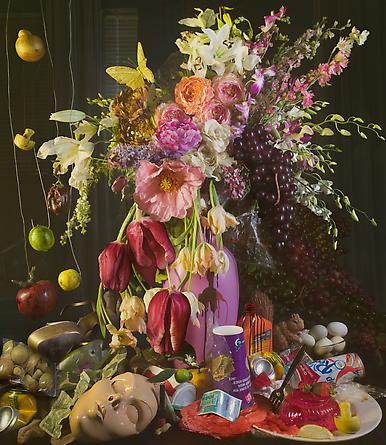 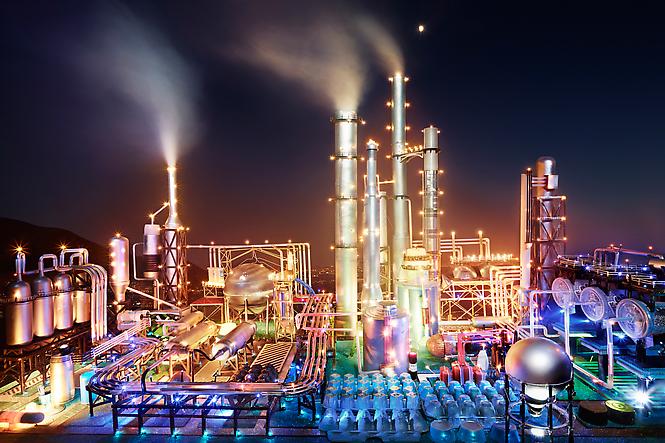 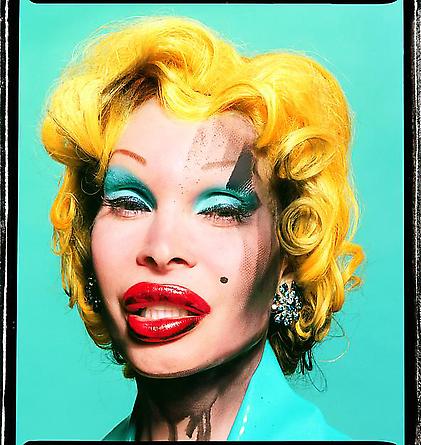 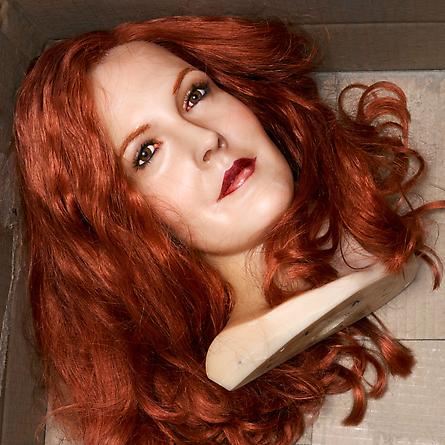 “Without changing ourselves individually it will be impossible to have change in the world”. Although LaChapelle’s art may not appeal to everyone, he is full of meaningful quotes about introspection, society and the impact of art. He likes to create thought-provoking pieces, whether they are erotic photographs, advertisements, commercials, music videos or his first full-length film, Rize–there is always a narrative or a social commentary. Many of his photos depict destruction caused by natural disasters and climate change, extreme consumerism, religious symbolism, celebrity, sexuality and other topics relevant to current events. He photographs what is on his mind and presents it to the public. “All art, when you look at it, it’s yours” he tells the crowd. “You can’t possess art except in your mind’s eye”.

After showing slides of his early works, he put on Michael Jackson’s song “Can You Feel It” at a comfortably loud volume and proceeded through many of the bright high-contrast images of celebrities in fashion magazines that made him famous. LaChapelle presented us with many life lessons that he learned through experiences and gave those at the inauguration a look into his personal life: growth, successes and fears. As a result of never having finished high school, he always had a fear that he wouldn’t be able to find work, and as a result he never turned down a job once he was photographing for fashion magazines. But in 2006 he was ready for a new chapter in his life. One of the reasons was that it was getting ever more difficult to convince editors to publish his controversial takes on Biblical scenes in fashion photography. Pietà, a mother losing her son, is the subject of many of his photos throughout the last three decades. He realized that although he had more photos in him, so to speak, he didn’t think they had a place in the commercial world. Having started his career in the 80’s, he couldn’t see how his commercial experience would acceptably transfer to fine art exhibitions in galleries and museums. Instead, he moved to Maui with friends to start a sustainable farm, but it wasn’t long before he returned to the art world. In 2007, a gallery requested that he produce and display a selection of photos and so he created a series with flood scenes inspired by Michelangelo’s Deluge. In describing this series, he spoke of how modern society has its priorities and values backwards, yet in moments where it feels like “the end” people realize what is really important rather than just focusing on material items. It’s as if “our world was diagnosed with cancer and we need to reevaluate ourselves”, as LaChapelle put it.

The beauty of this amazing exhibit is that it takes the viewer through different phases of the artist’s life and what was on his mind at the time. Other selections on display include Negative Currency, enlarged prints of international currency used as negatives, Earth Laughs in Flowers, still lifes of flower bouquets with everyday household items mixed in. Still Life is a selection that contains body parts of wax replicas of celebrities set on top of pieces of cardboard boxes and Recollections in America are collages of original 1970’s photos of family gatherings with additional items or people seamlessly added in, such as flags, alcohol and firearms. Land Scapes is the most recent work showcased in this exhibition and it portrays brightly-colored oil refinery plants looking more like Candy Land or amusement parks even as they spew thick smoke into the air.

The exhibition is on display through April 13, 2015. For more information about places to view art in Barranco and the large selection of museums in Lima, please contact us!

*Selection of photos from davidlachapelle.com

MAC Barranco – Contemporary Art in Lima For several decades, the Instituto de Arte Contemporáneo (IAC), a major national cultural institution, has been fighting to provide Peru, and particul...
KusyWasi Villa: A Private Alternative to Urubamba Valley Hotels Of the many accommodation options in Peru’s Urubamba (Sacred) Valley, we have recently come across a very special and unique alternative being offered...
Aracari guest testimonials: “The only way to see Peru is with Aracari.... Aracari guest testimonials & reviews We are pleased to say that our intelligent and expert travel guides have been applauded in many of the repor...
A Tribute to Madre Antonia She was hailed by the likes of nobel prize winner Mario Vargas Llosa as “the lady of the Colca Canyon”, while an article published in renowned British...
Marisol, Aracari’s owner, rings in 2008 from Cartagena, Colombia    I just spent a week in Cartagena coinciding with New Years. It is the busiest time of the year in Cartagena, as it is the favourite place for Co...
Chavin Culture Exhibition Opens at MALI The Chavin Culture The Chavin Culture is an extinct culture that developed between 1500 and 300 B.C. in the highlands of the Peruvian Andes and its i...
Previous postChilcano Week 2015 Lima
Next postDefying Gravity at Pirqa Climbing Wall Lima