The Moche culture, which prospered from around AD 1 to 700, dominated several valleys on Peru’s northern coast long before the famous Inca empire appeared in the country. The Moche left an especially vivid artistic legacy, particularly in their pottery and metallurgy. A series of Moche centers dating from about AD 300 to 550 administered Peru’s northern valleys, including Huaca del Sol and Huaca de la Luna (Pyramids of the Sun and Moon) in the Trujillo Valley. These truncated mud pyramids lie on the south bank of the Rio Moche, about 10 kilometers (6 miles) southeast of Trujillo by way of a rough road, and form part of the increasingly well-known Moche Route , where travellers can explore this fascinating historical legacy along the northern coastal desert. 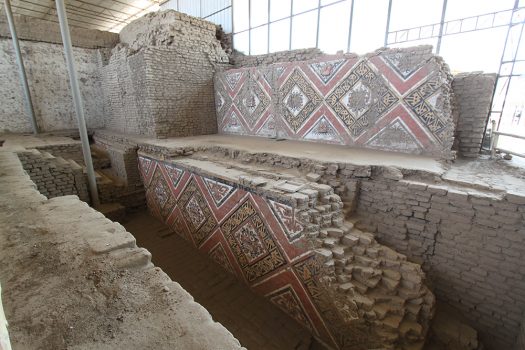 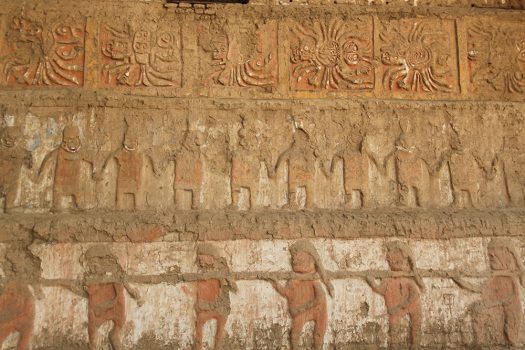 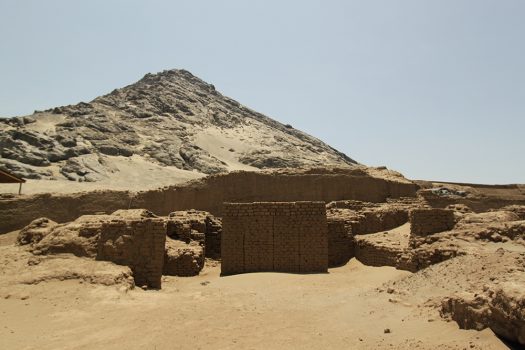 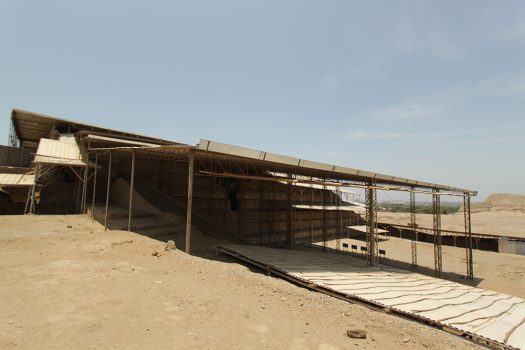 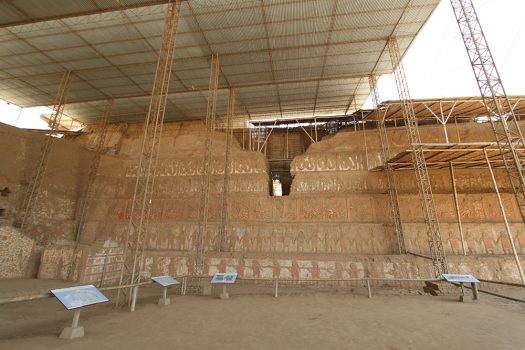 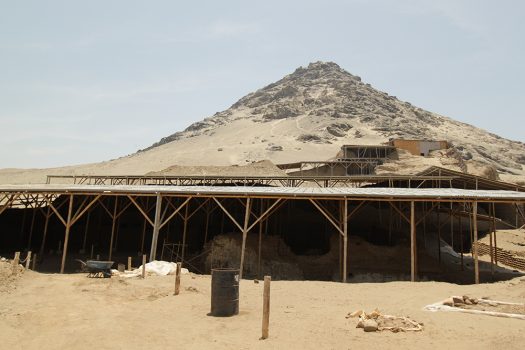 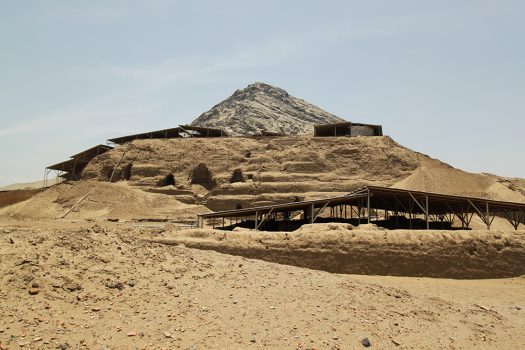 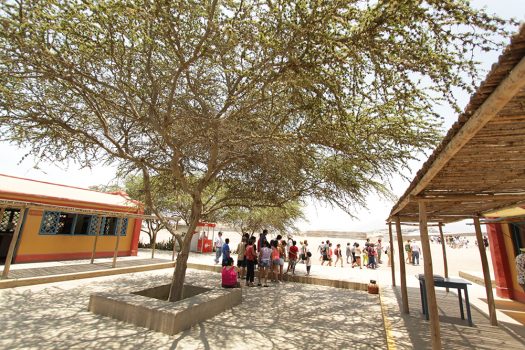 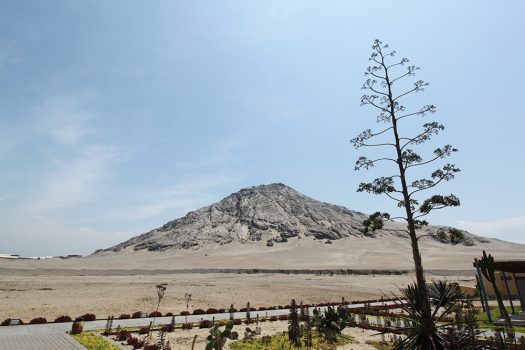 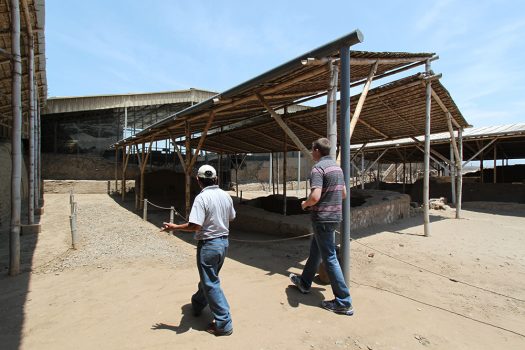 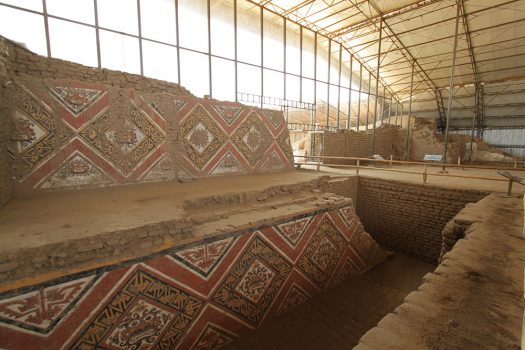 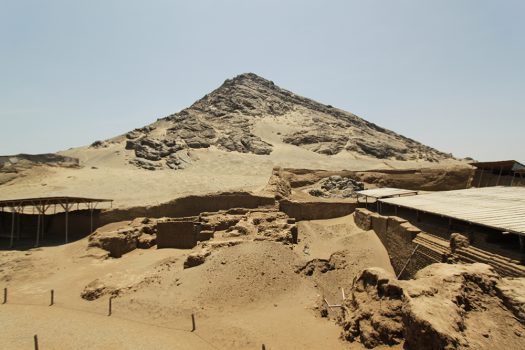 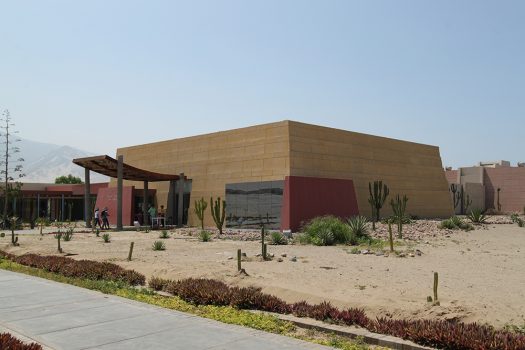 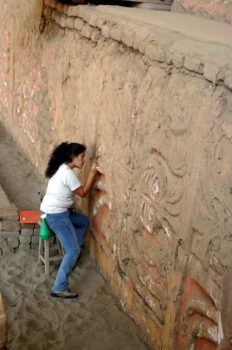 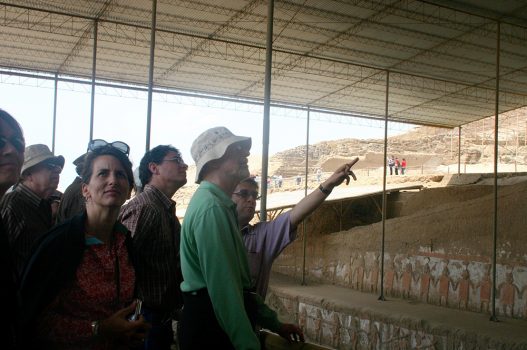 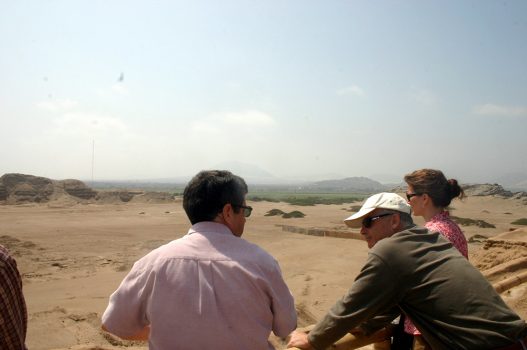 The Huacas are terraced adobe mounds that likely complemented each other, with Huaca del Sol serving an administrative function and Huaca de la Luna a religious one. The Huaca del Sol is the single largest Pre-Columbian structure in Peru. The smaller Huaca de la Luna is about 500 meters away across the open desert. Although less impressive in size than the Huaca del Sol, the Huaca de la Luna has yielded many more artifacts. Dozens of pottery shards lie around its open area, and the pyramid is riddled with rooms which once contained the Moche’s signature ceramics, precious metals, and polychrome friezes. Builders employed an estimated 50 million adobe bricks to bury earlier structures and create platforms for new ones. Some 10,000 people may have lived and produced a wide array of crafts in the plain separating the Huacas, the settlement’s most imposing structures.

My first impression of the complex from the outside was underwhelming: it looked, at first sight, like a pile of pyramid-shaped mud! Hardly the replete archaeological mecca it is famous for being. Indeed, the destruction wrought by centuries of looting, flooding, invading sand dunes, and intense sporadic rainfall makes it harder today to envision the thriving community that resided there. Much of the city is buried in loose soil, which covers residences ranging from houses with foundations of river cobbles and perishable superstructures to well-made buildings of stone and finely plastered adobe walls.

My guided visit had been originally arranged with Aracari’s specialist guide Dr. Ricardo Morales. Director of the Huaca de la Luna Archaelogical project, Morales has been engaged in archaelogical research and conservation projects along Peru’s Moche route for over thirty years and is a recipient of numerous honors and awards for his contributions to his field. Due to unavoidable circumstances he was, alas, unavailable, so stepping into his place was conservationist Mr. Moisés Tufinio Culquichicón, a widely published researcher on the subject of the Moche, and Huaca de la Luna specifically. Thanks to Aracari’s contacts, he promised to provide me with privileged access to the site and we entered areas under conservation and restoration that were cordoned off to the general public.

Moises is the most senior on-site staff member and was very engaging. Although with limited English (our excellent English speaking guide facilitated translation), he was friendly, warm and didn’t come across as unapproachable learned academic. After first visiting the informative on-site museum for an initial introduction to the history and context of the Moche culture, Moises led us around the archaelogical site itself.

As Moises explained, the Huaca de la Luna served as the valley’s paramount shrine and the setting for ceremonies of human sacrifice. In an enclosure at the back of the pyramid, archaeologists found the remains of more than forty men whose scattered bones lie in thick layers of sediment, suggesting that they were likely sacrificed in a bid to end the heavy rains that accompanied an El Niño event. Priests presided over such rituals, acting as the alter egos of a Moche deity called ‘the Decapitator.’ This half human, fanged deity—often shown holding a ceremonial tumi (a knife with a crescent shaped blade) in one hand and a severed human head in the other—appears in a variety of guises and features in murals and friezes embellishing Huaca de la Luna.

Guided by Moises the seemingly simple-looking external structure of Huaca de la Luna transformed before me, along with the true realisation of how incredibly rich Peru’s history is.

I visited Huaca de la Luna as part of my three-day exploration of the Moche Route. After visiting Huaca de La Luna I continued on that day to Huanchaco for a seaside lunch before visiting the UNESCO World Heritage site of Chan Chan in the afternoon, staying overnight in Libertador Trujillo, on the city’s main plaza.

The Huaca de la Luna Museum and Site are open daily from 9 am – 4 pm. To arrange a visit with a specialist guide as part of a tailormade trip to Peru with the local Peru travel experts Aracari, contact us at travel@aracari.com.

A Guide To Peru’s Northern Beaches The tropical northern beaches of Peru are one of the country’s best kept secrets. With soft sand, year-round sunshine, and a lack of the tropical stor...
10 Highlights Of Northern Peru Discover Northern Peru Northern Peru has much to discover, and all kinds of untapped treasures right at your fingertips. It has so much to offer but ...
Andean Culture with Ethnomusicologist Holly Wissler Specialist Guide Holly Wissler Holl Wissler, an ethnomusicologist, is one of Aracari's specialist guides in Peru. Her academic research and wealth of...
Chachapoyas Conservation with Adriana von Hagen Meet Adriana - dedicated to Chachapoyas conservation Adraiana von Hagen is a Peruvian writer, archaeologist, research associate of the Leymebamba m...
Chachapoyas Archaeology: 4 Sites Not to Miss Aracari's pick of best Chachapoyas Archaeology The pre-Inca Chachapoyas civilization left behind many mysteries. While they had no written language, ...
Our Favorite Museums To Visit In Lima, Peru From pre-Columbian gold riches to the erotic pottery of the Moche, Lima is home to many of Peru’s most sacred artifacts and artworks. Lima’s museums a...
Tags: Archaeology in Peru Archaeology tour Peru moche route northern peru tour Peru archaeology Peru Specialist guide Peru Travel specialist
Previous postCasa Gangotena Hotel in Quito
Next postA luxury stay at Pikaia Lodge Galapagos