The pre-Columbian city of Chan Chan

The Chan-Chan archaeological site is a highlight of Peru’s Moche Route,. The complex was the capital of the Chimú civilization from AD 900 to 1400. Located about 5 kilometers (about 3 miles) west of Trujillo, it was built around AD 1300 and covers about 28 square kilometers (11 square miles), making it the largest mud city in the world.

The city of Chan Chan was built out of adobe (or bricks of dirt). Built by the Chimu people in about 1300AD, Chan Chan is close by to the modern day city of Trujillo, an area rich in pre-Columbian history and home to many thousands of years of civilisation. 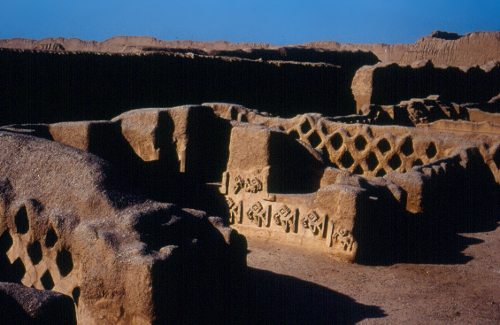 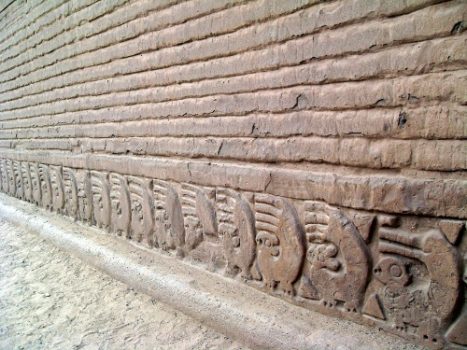 Arguably the most striking features of the city’s impressive architecture are the brilliant designs and motifs carved into the adobe bricks. These represent birds, animals and figures as well as following intricate horizontal and vertical stepped patterns. The motifs depict everything from customs, religious mythology and constellations to farming and fishing seasons.

On the outskirts of the citadel, there was an area where the people were mainly engaged in farming, craftsmanship, and fishing—the main activities that sustained this northern Peruvian civilization.

Chan Chan in its heydey

In its heyday, Chan Chan consisted of administrative offices, ceremonial altars, storerooms, military bunkers and vast reservoirs that still stand today. Although the site is no longer as splendid as it must once have looked, visitors can still marvel at the architecture of the palaces: huge constructions of clay and sand measuring up to 15 metres in height.

Chan Chan was declared a UNESCO World Heritage site in 1986. Chan Chan is one of the many fascinating archaeological sites along the Moche route (the Chimu Empire descended from the Moche).

Contact us today to speak to an expert travel planner about visiting Chan Chan.

In Conversation with Joaquin Randall: How to make tourism more sustain... Joaquin Randall’s is a sustainable tourism entrepreneur based in Ollantaytambo, near Machu Picchu, Peru. Peruvian born of American parents, Joaquin is...
Visit to Kusi Kawsay School in Peru’s Sacred Valley By Caitlin, Photos: Caroline Maxcy Photography | On July 4th, 2012 I had the pleasure of visiting one of the most unique schools I have ever seen. It ...
Traveling for Wellness in Peru As more people across the globe look to shrubs, herbs and other vegetation for their natural wellbeing benefits, Aracari is anticipating a boom in tra...
Callao Monumental – Visiting The Center Of Urban Art in Lima Callao, a colorful district on the north-western edge of Lima, is quickly gaining a reputation as the center for urban art in Peru. Where else in the ...
Luxury Trekking in Peru: our top 5 Inca Trail alternatives For those traveling in Peru, the allure of the country’s most famous trekking trail, the Inca Trail trek, is undeniable. Spending four to five days as...
Marisol Mosquera Conde Nast Top Travel Specialist for Peru and Bolivia The Conde Nast Top Travel Specialist List Every year, leading travel magazine Conde Nast Traveler compile a list of the créme de la créme of travel e...
Tags: Archaeology in Peru Archaeology tour Peru northern peru tour Peru Peru archaeology
Previous postThe Lord of Sipan – Peru’s Moche Route
Next postThe Inca site of Pisac