The Marinera: An Interview With Marcela Ganoza

Guillermo Ganoza, the father of Marcela Ganoza Bombieri- a dear friend of Aracari- is credited with saving the marinera dance and elevating its status in Peru to the country’s national dance. Ahead of her anticipated book with world-renowned photographer Mario Testino, Aracari spoke to Marcela about the marinera dance and her father’s role in reviving this Peruvian tradition. 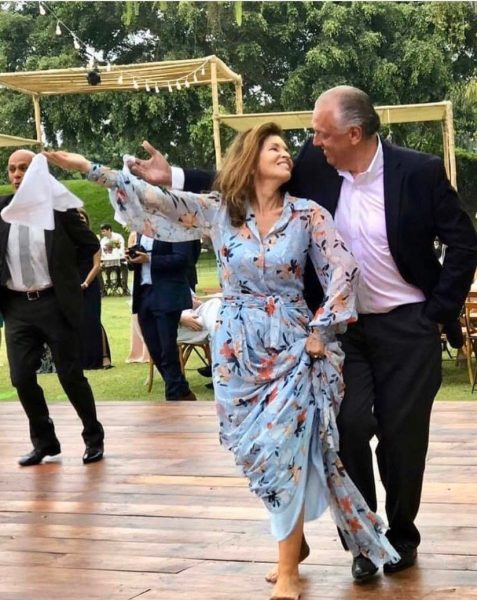 Aracari: How would you describe the marinera dance to someone who has never seen it?

Marcela: The marinera is a courtship dance. It involves a couple who dance around each other, initially at a distance, flirting and getting to know one another. Dancers wear traditional outfits and typically hold white handkerchiefs as they move. It’s the job of the male, who has fallen hopelessly in love, to win over his partner’s affections. As the love story progresses the couple dance more closely and more quickly together until the climatic point of the dance is reached, and the duo finally dance together.

Today, the Pope and heads of state will all receive a display of the marinera whenever they visit my country.  As a Peruvian and as my father’s daughter, it makes me incredibly proud to see the marinera celebrated as a most important symbol of Peru.

Aracari: Why is the marinera so important to Peruvians?

Marcela: The dance connects Peruvians to their ancestors. It has become a feature of our cultural identity. Until sixty years ago, few Peruvians knew how to dance the traditional marinera. It was passed down to us by people like my grandmother, Doña Hortencia. Each year on her birthday she would host a party at the family’s hacienda near Moche and dance the marinera for her guests. All my older cousins and family friends learned by watching her. Unfortunately, I never had the chance to meet my grandmother, and so I learnt it on my own, watching others and feeling the music.

Peruvians debate exactly how old the marinera dance is and to what extent Andean, African, Hispanic, Moorish and Colonial traditions have influenced the dance. In any case, it has existed in Peru for a long time and can be traced back to a dance called ‘zamacueca’. However, in the nineteenth century the dance was renamed in honor of the heroes of Marina del Peru (the Peruvian Navy).  Consequently, the marinera represents gallantry, grace and most importantly unity. It is a dance that unites all Peruvians, independently of their background, race and age. The differences between people do not matter because we can all dance the marinera! 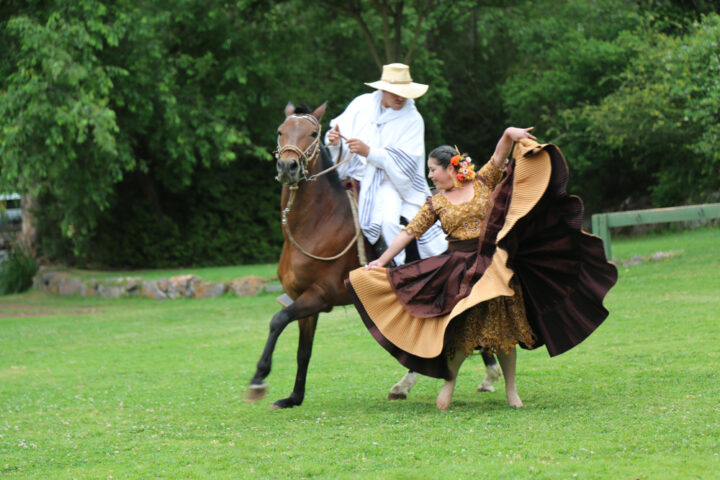 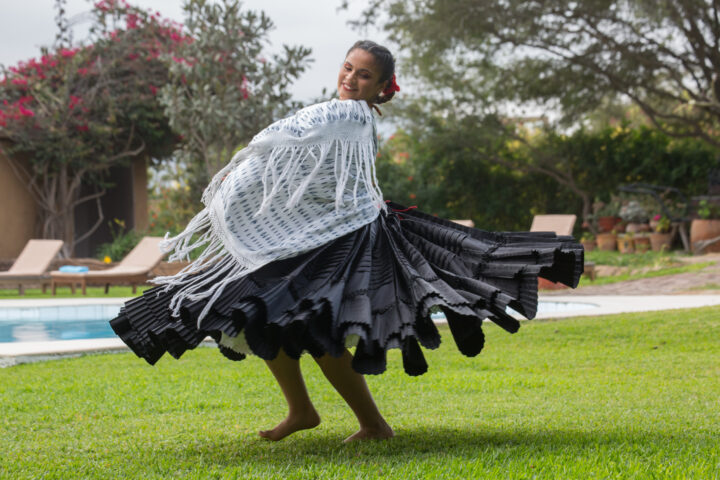 Aracari: Why is Trujillo considered the capital of the marinera in Peru?

Marcela: The ‘Concurso nacional de marinera’ (annual marinera competition) that my father started 60 years ago in Trujillo plays a significant part. To this day it is the most important marinera competition in Peru. If you win there, you are the champion.

Originally my father, Don Guillermo, promoted the competition to diplomats, photographers, foreign friends and local musicians.  His work raised the profile of the marinera across Peru and the dance’s connection to Trujillo. He acted as the head judge of the Concurso Nacional de marinera for almost 30 years.

Sadly my father died at a relatively youthful age (65), but just a couple of years before, Trujillo was named the capital of the marinera in Peru … Imagine how happy he must have felt! Club Libertad, its President and the board of directors continue to organize this beautiful event, which grows larger with each year that passes.

Aracari: How big is the marinera in Peru today?

Marcela: The marinera is now the most well-known dance in Peru. Visiting heads of state to Peru are frequently greeted with a display of the traditional marinera dance. I can’t help to feel a great sense of pride and emotion.

The marinera is more popular than ever. The inaugural marinera competition featured just 12 competing couples and was hosted by my father in the social club’s basketball court. Nowadays, the competition has become a marinera festival. The competition is hosted in a colosseum that must fit over one thousand competitors and fifteen thousand spectators.

The competition continues to reflect my father’s openness and warm-heartedness towards people of all backgrounds. From age three upwards, there are seven age categories, in addition to a unity category that showcases the phenomenal rhythm of marinera dancers with down syndrome. 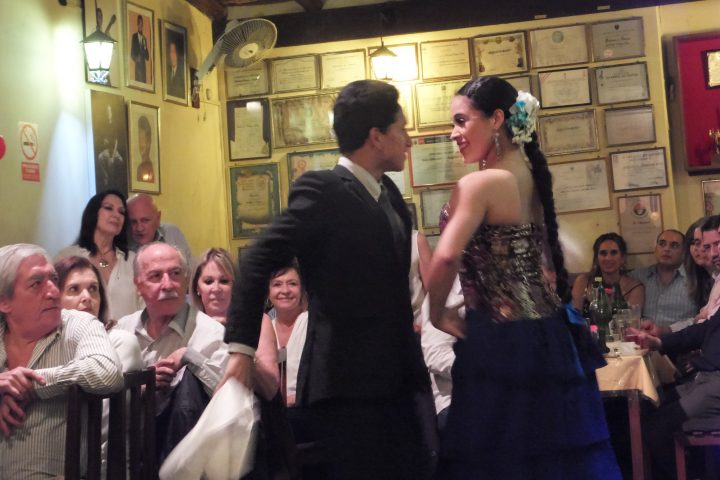 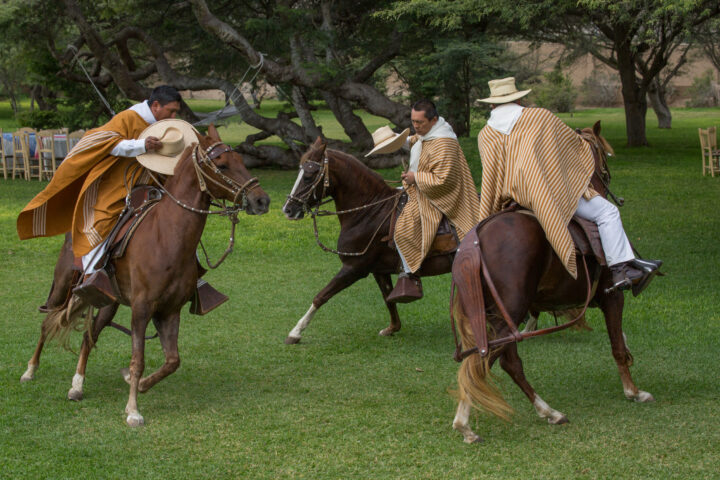 Aracari: You’ve previously been kind enough to open your home and host marinera dances for Aracari travelers – what has that experience involved?

Marcela: On a smaller scale than my dad used to, we always try to showcase the marinera to travelling friends. Marisol is a friend of ours and she always includes a visit to our house in her guests’ itinerary to the North of Peru. A marinera display is always requested!

My house is one of the most well-kept colonial houses in the main square of my Trujillo. Amusingly, it is my Italian husband, Enrico, who deserves most of the credit for keeping it in wonderful condition! He loves restoration and is fascinated by the work of local artisans.

Aracari: You have produced a book about the marinera with the world-renowned photographer Mario Testino – What can you tell us about it?

Marcela: It’s a very elegant, visual book that captures Mario’s interpretation of the marinera. There are close-ups of the dresses in flow, the expressions on dancers’ faces, the emotions, movements and traditions of the dance. It’s different from other books on the marinera, a little unexpected, and that’s what I think makes it interesting.

I helped Mario discover the different aspects and layers of the marinera and ended up sourcing the dancers and dresses to be photographed by Mario. In return, I was greatly honored that he asked me to write the prologue for this exquisite book. 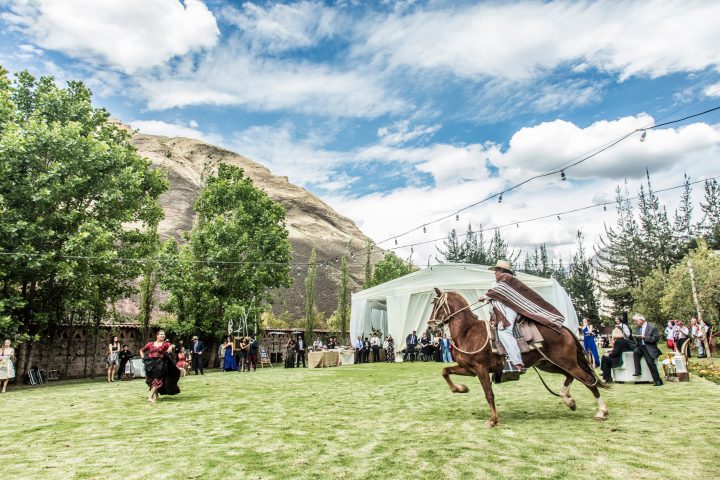 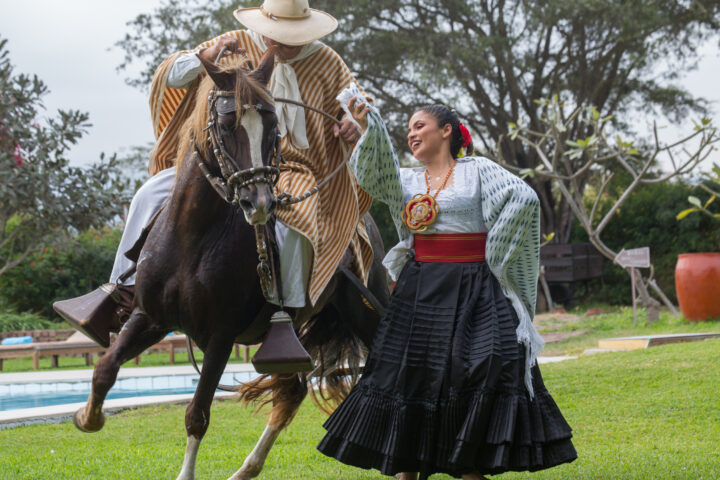 Aracari: What was it like working with Mario Testino?

Marcela: Mario’s talent is internationally known, and it has been a beautiful opportunity and privilege for me to observe his creative process up close. Before Mario started this book, we vaguely knew each other through my mother’s former role as President of the World Monuments Fund in Peru, a position that was later held by Mario. However, it wasn’t until January this year when Mario visited my house in Trujillo and saw one of our marinera displays. He really enjoyed photographing the marinera dancers as they glided around each other in the courtyard. Despite my suggestions to move to other areas of the house, he refused, he was captivated. There were so many aspects of the dance he discovered and enjoyed. A few days later he said to me “I think I’m going to produce a book”. It was extraordinary. And since then it has certainly been an extraordinary and unique experience for me.

Mario and Marcela’s book will be released at MATE Mario Testino Museum in early December. We thank our friend Marcela Ganoza Bombieri, for this thoroughly interesting discussion on the history of the marinera in Peru.

Raul Varela – the face of Aracari customer service As Aracari reflects on 20 years of offering bespoke luxury trips to Peru, Bolivia and the Galapagos, Danielle speaks to Raul Varela, the company’s lon...
Macaw Project at the Tambopata Research Center A short boat ride from the Tambopata Research Center, a jungle lodge eight hours upriver from Puerto Maldonado, lies the largest known macaw clay-lick...
In Conversation with Joaquin Randall: How to make tourism more sustain... Joaquin Randall’s is a sustainable tourism entrepreneur based in Ollantaytambo, near Machu Picchu, Peru. Peruvian born of American parents, Joaquin is...
Qoyllur Rit’i   Peru is famous for its rich culture and colorful festivals, Qoyllur Rit'i festival is an impressive high-altitude pilgrimage in the Cusco re...
Aracari Conversations in June We have wonderful things happening in June. We would like to welcome you to our series of Conversations during the month of June. We have included su...
Las Aldas & Chankillo: one of the lesser known archaeological site... By Lauren | Six AM is quite a time to start a long journey of any sort, but my colleagues, Simon and Yasmin, and I knew that a wonderful day was ahead...
Tags: living culture Peru
Previous postChristmas in Peru – See, Eat, Do
Next postAracari launches The Peru Food Guide, second edition.