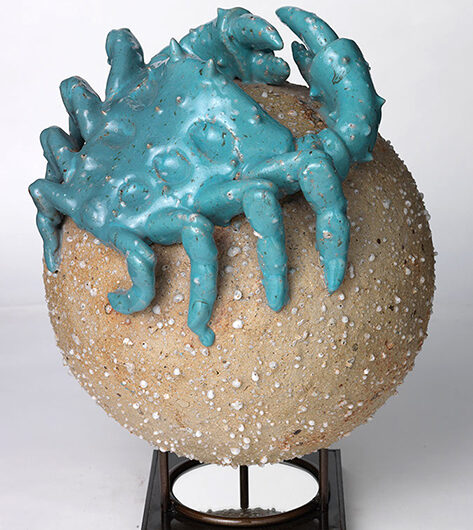 The moment I stepped into the Carlos Runcie Tanaka Space in the contemporary art Gallery Galería Enlace in Lima , the variety of ceramics was striking. The sculptures ranged in size from tiny circular objects to towering vertical installations, all colored with an expansive palette of natural hues and the occasional eye-catching turquoise. In addition to the earthy color scheme, the prevailing imagery of faces, hands, and crabs unified  Carlos Runcie Tanaka’s collection. I couldn’t help but ponder the memories evoked by the mythical forms, the artistic process of their creator, and the story the collection was trying to tell.

Visit to the Gallery of Ceramicist Carlos Runcie Tanaka

I attended the inauguration of Carlos’s exhibit at Galería Enlace – Arte Contemporáneo in April 2015. Carlos spoke highly of the support Galería Enlace provided to promote and present his work. Many of the pieces on display were once hidden away in his workshop, but thanks to  Enlace, they are now on display for all to see. And, as of June 2015, Carlos’s Espacio CRT found a permanent home on the second floor of the gallery. 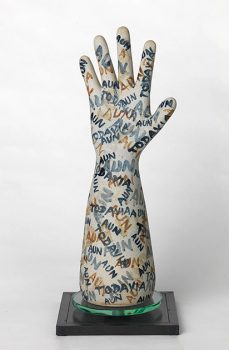 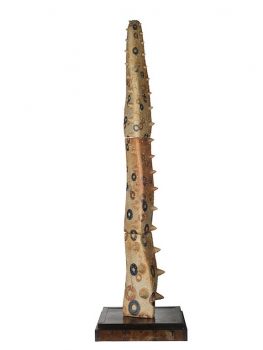 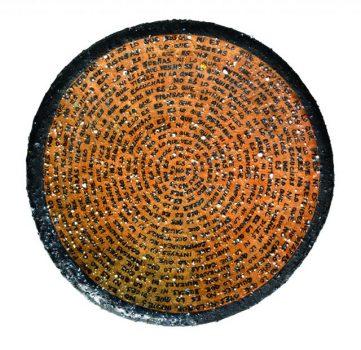 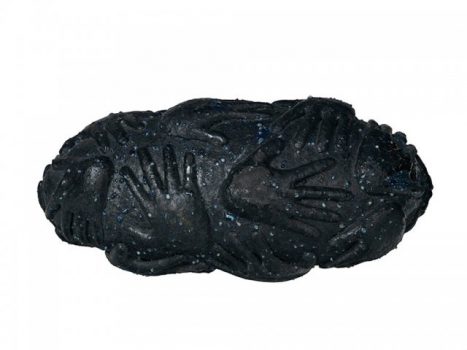 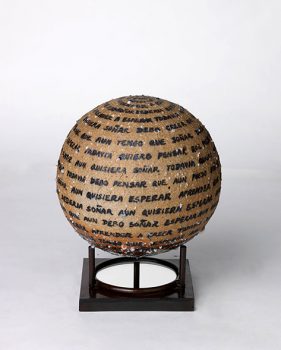 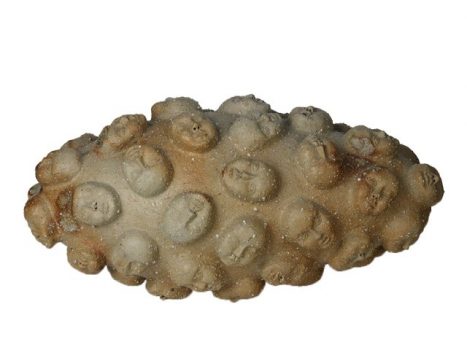 I was fortunate enough to squeeze into Carlos’s busy schedule and ask about his studies, influences, and meaning behind the pieces of art currently on display in Enlace. Carlos aims to present different sides of his work to the public by rotating the pieces on display.  These changes are intended to mirror the theme of movement and continuity, which are central to his work. Carlos explained how he finds the process rewarding as an artist actualizing a personal vision of his portfolio, but also challenging to execute.

Crabs are represented in many forms within Carlos’s work: as paintings, kiln-fired ceramics or folded into origami. At the Espacio CRT in Enlace, there are a few different colored spheres that each feature a large crab clinging to the surface. In 1994, Carlos was walking along the beach with his family in Cerro Azul, south of Lima. Their stroll was surprised by hundreds of small crabs, stranded by the sea and dried up in the sun at the foot of an obelisk commemorating Japanese immigrants. The image of those crabs on the coast made him think about migration, movement, and the possibility of no return. “I visualize crabs like beings that move between water and land and recall the cycle of life and death,” he mused.

Hands and faces also feature prominently in Carlos’s work. He calls the oval-shaped sculptures covered in hands or faces nubes, or clouds. “The faces and heads represent thoughts, and the need to see past limits and explore new possibilities. Hands and heads, manual labor and reason, almost like integrating the maker of objects with the maker.” Hands recall routine, daily tasks. They harken to the act of creating ceramics, the repeated motion of spinning clay between the hands like a movement with no beginning or end. “There’s a sense of freedom, eternal cycles where time doesn’t matter and goes on indefinitely,” Carlos explained.

Carlos’s childhood memories have had a great influence on his art. Along with the work of his favorite visual artists and singers, his experiences traveling, learning, and working in other countries have inspired him. Carlos’s art is also informed by the legacy of Peruvian ceramics, reaching back to Pre-Hispanic cultures like the Chavín, Moche, Chancay and Wari. These societies also included crabs, among other animals, in their ceramic pieces.

Carlos’s  passion for ceramics began when he left his studies in Philosophy in 1977 to work as an assistant at El Pinguino ceramics shop in Miraflores. “The potter’s wheel seduced me–the magic of the clay spinning between my hands, spontaneously creating different shapes” he reflected.  At a young age, Carlos was captivated by the way fire transforms soft clay into a material as hard as stone.

A constant search for identity lead Carlos on a quest to study not only the history and techniques of ceramics in Peru, but also Japan, Italy and Brazil. He believes that comparing and contrasting his culture with others is essential to his learning process, expanding his artistic horizons. As an assistant to Japanese artists Tsukimura Masahiko and briefly Shimaoka Tatsuzo, Carlos was further instilled with a passion for ceramics. He found a path to follow, which he described as, “not just a profession but a way of life.” The six years he spent in Italy, a country rich in history and culture, gave him the opportunity to learn technical skills but also to absorb art from his surroundings. After many years of research, experimentation, and collaboration, Carlos produced the impressive and meaningful works of art that he now displays in galleries and events around the world. Carlos has even had the opportunity to participate in many Art Biennials, which he relishes for the freedom to develop and share ideas.

Although Peru has a history of skilled ceramicists dating back to coastal pre-Hispanic cultures, the popularity of ceramics only began to gain momentum in modern times since the 1970’s. Carlos believes it is important for ceramics to receive the respect and focus that it deserves in the visual art world, especially considering Peru’s history. He hopes to support fellow ceramicists through the creation of a school dedicated to the art, a space to exchange ideas and receive the sort of training that helped Carlos pursue his passion.

Aracari arranges visits to Galería Enlace and Lima’s other top art museums and galleries as part of privately guided tailored tours in Peru. We can connect you with artists, curators and gallery owners, and work with a range of specialist guides, with backgrounds in folk art, architecture, history and more specialisms.

Contact us for more information on visiting Peru with a bespoke, private trip.

Things to do in Cusco for art lovers A Cusco Shopping Guide For Art Lovers One of the best things to do in Cusco is to get to know the city’s artistic and cultural scene. A refreshing wa...
Callao Monumental – Visiting The Center Of Urban Art in Lima Callao, a colorful district on the north-western edge of Lima, is quickly gaining a reputation as the center for urban art in Peru. Where else in the ...
Lima Sculptor Patricia Olguín Exhibits in New York City Back in 2013 we published an article on an exhibition of works by Lima sculptor Patricia Olguín at La Galeria in Barranco after Lauren, who previously...
Callao Monumental: Urban art in Lima Callao Monumental - Urban art project in Lima There's always something new to discover in Lima's exciting and ever-evolving contemporary art scene. I...
ESCUDO by Chiara Macchiavello Peruvian fashion designer Chiara An air of positive energy charged the atelier and showroom of Peruvian fashion designer Chiara Macchiavello, as we e...
Las Pallas Lima Christmas Collection Now that the holiday season is upon us, it is time to visit Las Pallas’ Christmas collection of ornaments, nativity scenes and more. Las Pallas handic...
Tags: art in Peru Contemporary art in Peru Lima art Peruvian art
Previous postCeviche Cooking Class with Marisol
Next postSustainable Tourism in Peru: 5 Initiatives We Love