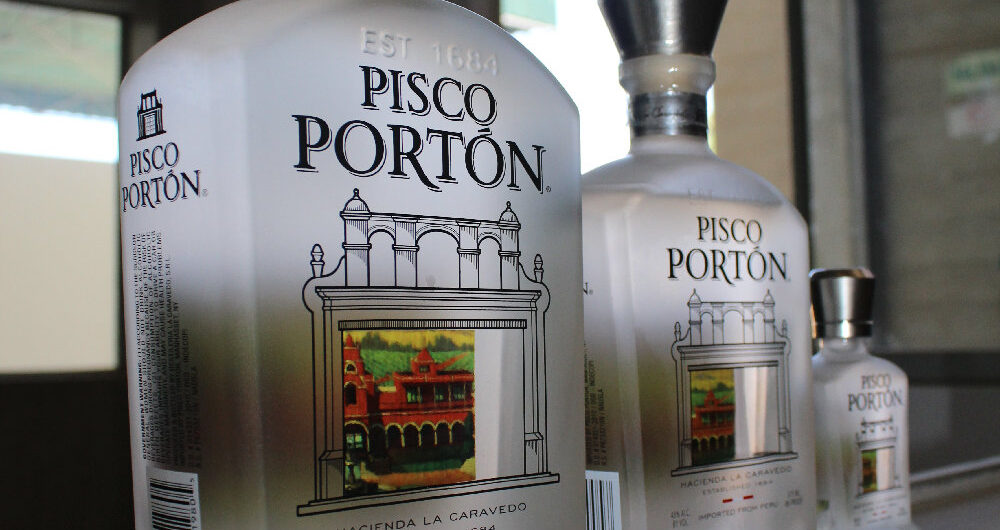 Located 70 km southeast of Paracas lies a vast fertile land known for producing large quantities of succulent grapes used to create Pisco (Peru’s national drink) as well as a selection of increasingly high-regarded wines.  A few weeks ago, Aracari-founder Marisol, Lauren, and I went in search of a route that could deliver the perfect tasting experience, leading us to a variety of different vineyards and distilleries.  From modern and impressive, to the classic and cozy, and even the dirty and impersonal, we were able to delineate a path that is sure to deliver the best of fine Peruvian spirits.

Our first stop was for a sneak-peek at the brand-new Pisco Portón distillery. Situated on the grounds of the oldest working distillery in the Americas, Hacienda La Caravedo dating from 1684, Pisco Portón seeks to embrace and integrate its traditional, centuries-old methods into the its new, sleek and modern facilities.

When Texas oil mogul William Kallop and his son were in Peru for business, they made a discovery of a natural resource quite different to the oil with which they were familiar: Pisco. Their love for the intense flavors of the liquor led them to purchase the historical Hacienda, and they enlisted the expertise of Johnny Schuler to serve as Master Distiller of the multi-million dollar project. Mr. Schuler, Peru’s “pisco ambassador,” also travels around the world promoting and educating people about the liquor and is famous for his popular TV show Por Las Rutas del Pisco. With the help of Schuler, the distillery has already earned itself a reputation of producing some of the best Pisco in Peru and is becoming increasingly popular outside of the country as well.

We arrived at the enormous entrance gates where we were promptly greeted by the friendly staff and on-premise security.  We were also welcomed by Rodrigo, a logistics manager for the company, who informed us that he would be showing us around the grounds for the day. Our tour began with a walk past the centuries-old traditional distillation facilities. Beautiful, restored wooden structures, scarred from its many years of use, formed the basis for the press, or lager (pictured below). Portón. Rodrigo informed us, plans to keep alive this part of the distillery, which despite being hundreds of years old is in excellent shape, and without using electricity or modern machinery, is used to create their signature, high-end blend (5% of output).

Beside the traditional facilities, a picturesque scene was beginning to unfold, as construction was still underway on the estate’s gorgeous hacienda. Interestingly, the stately home on the bottle was designed prior to the construction of the actual hacienda, and the full-scale version is promising to be as every bit as elegant as the label portrayed it to be. Fittingly placed beside the new estate is the original gate that has marked the entranceway for hundreds of years and is the sole inspiration behind the name Portón, which is Spanish for “gate.” 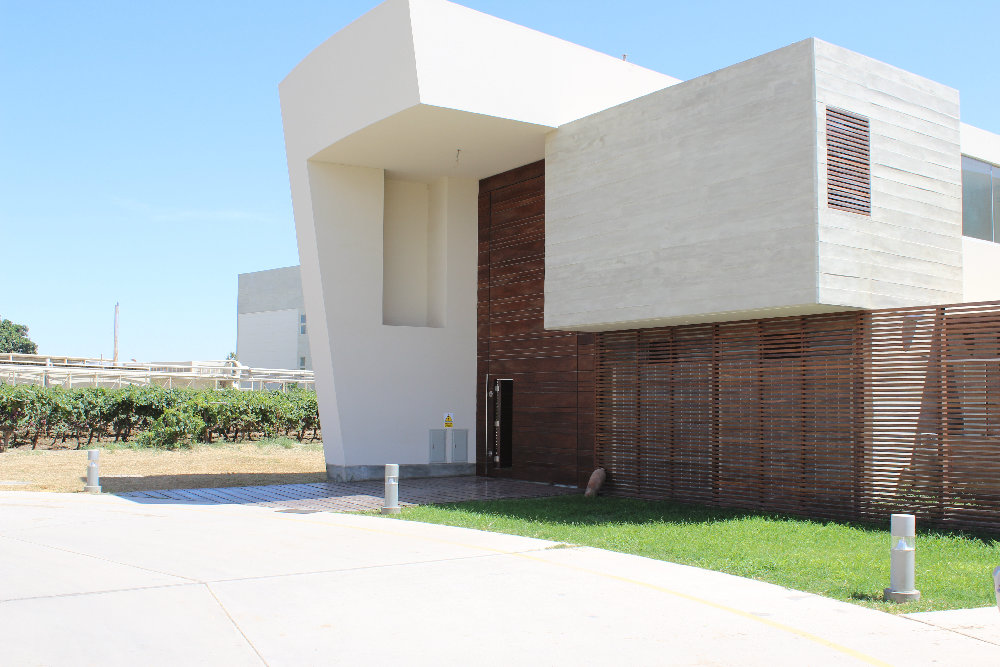 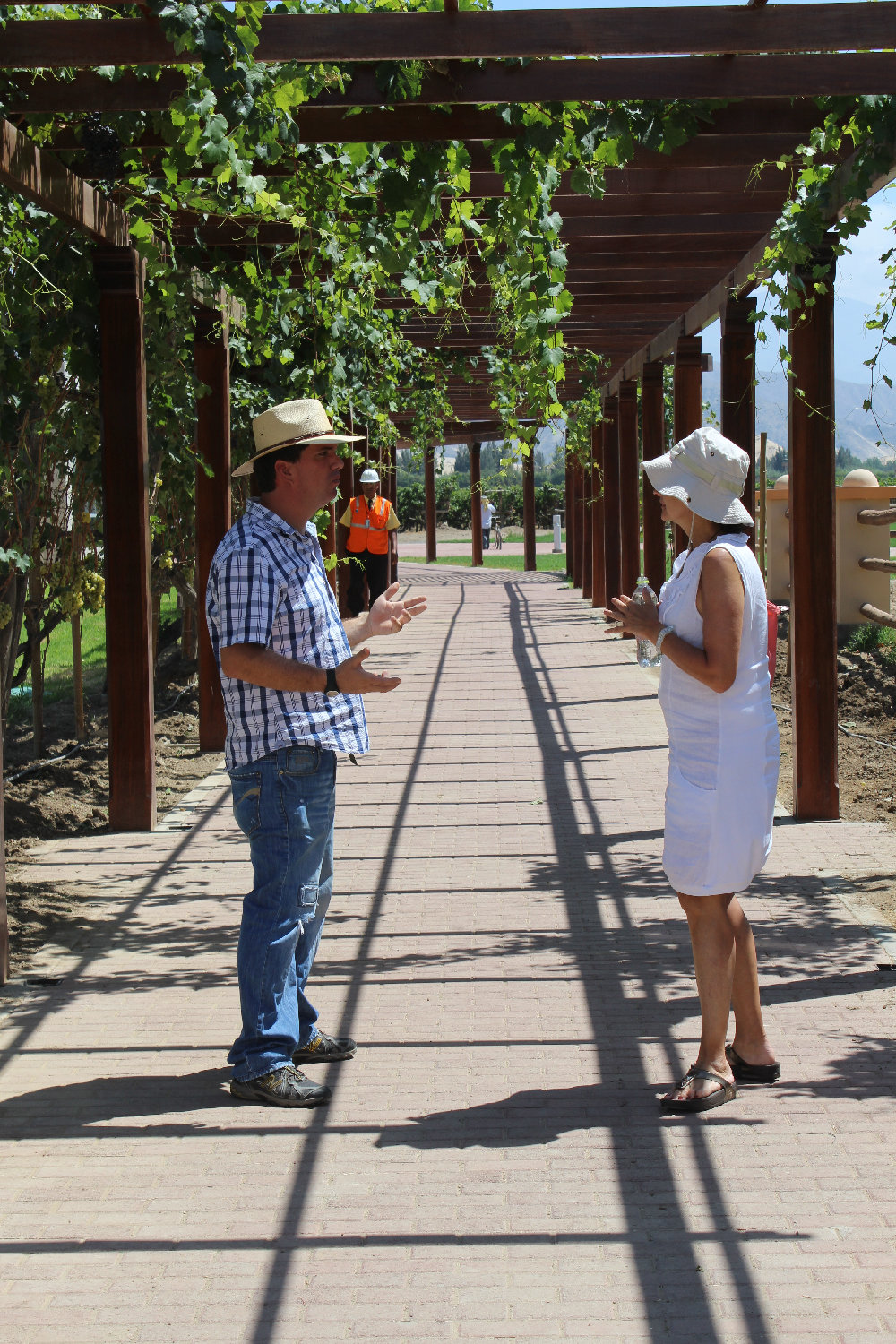 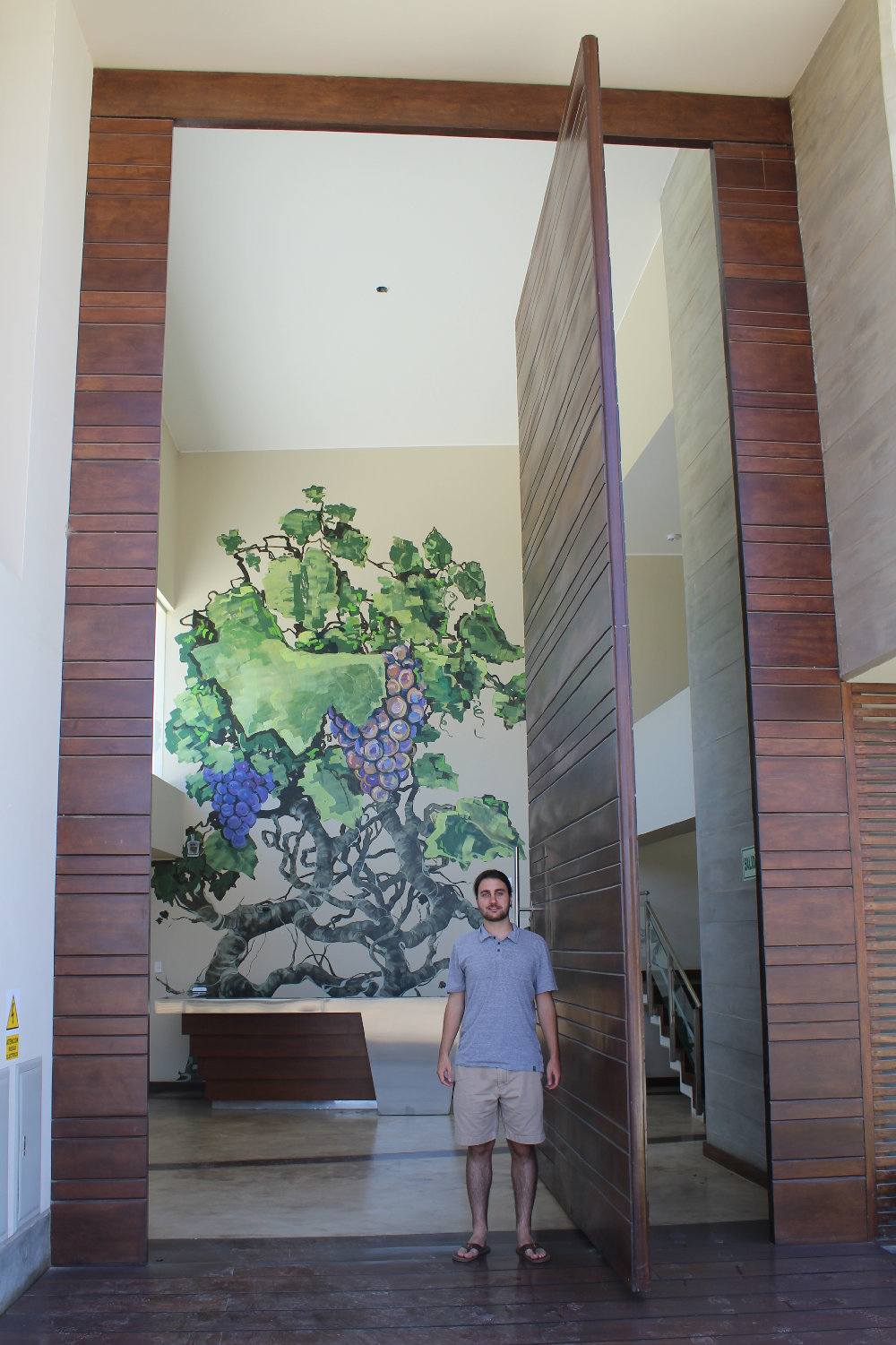 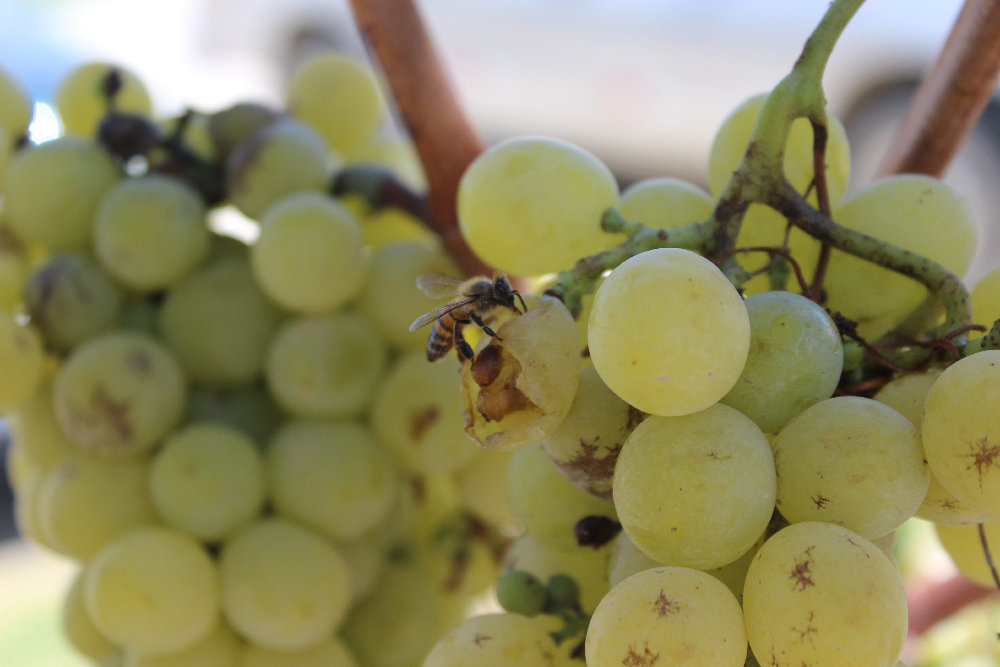 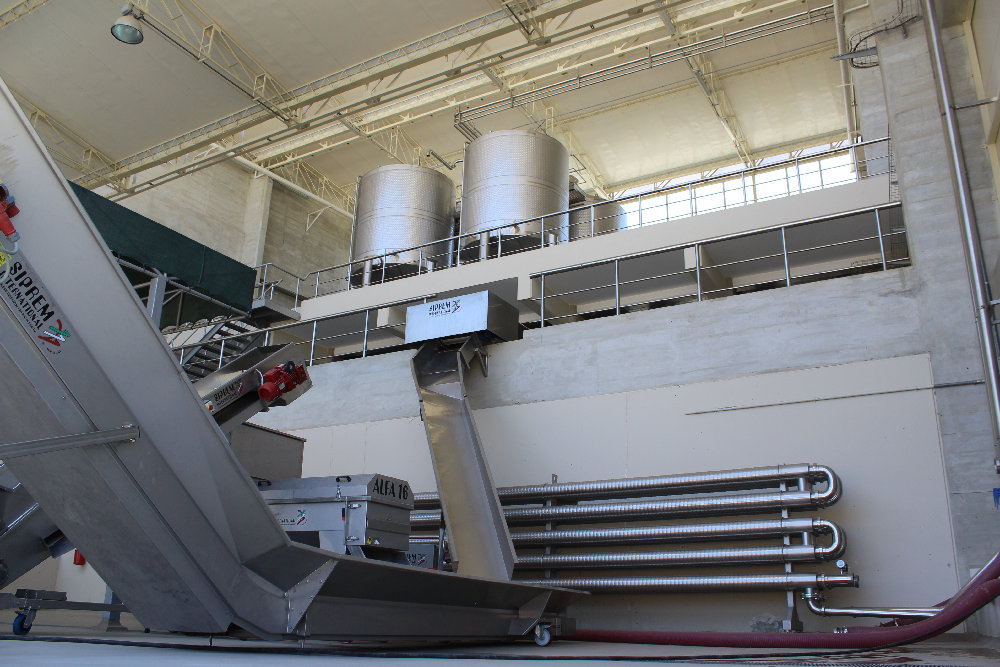 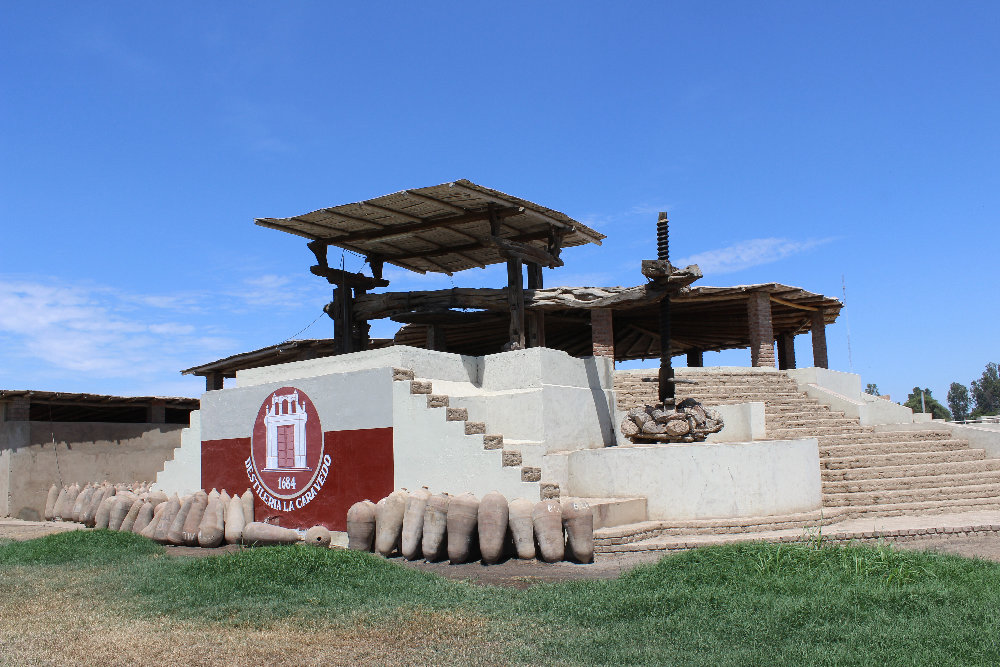 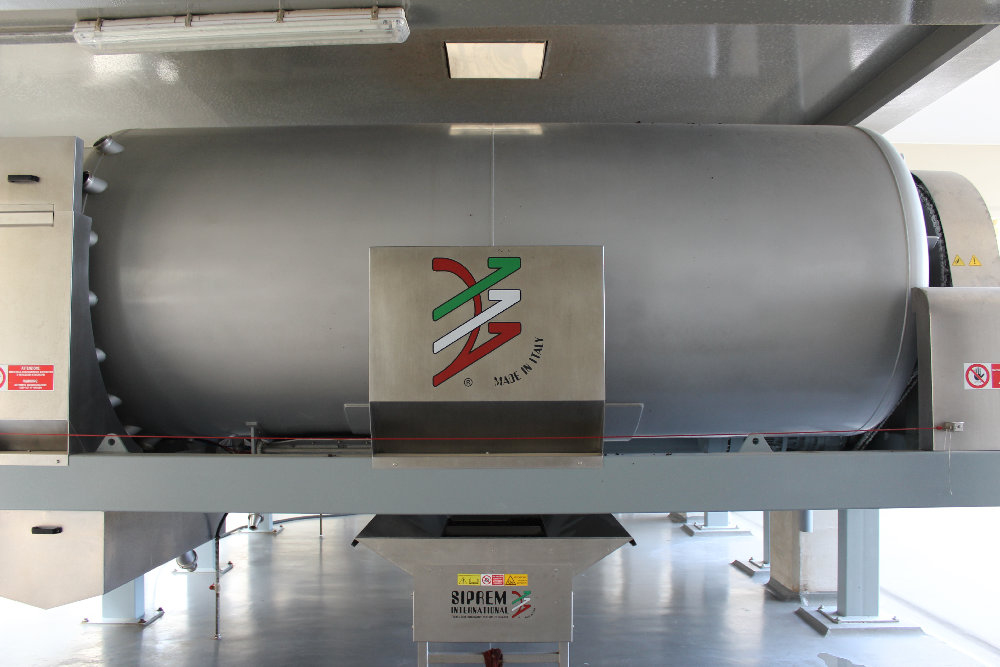 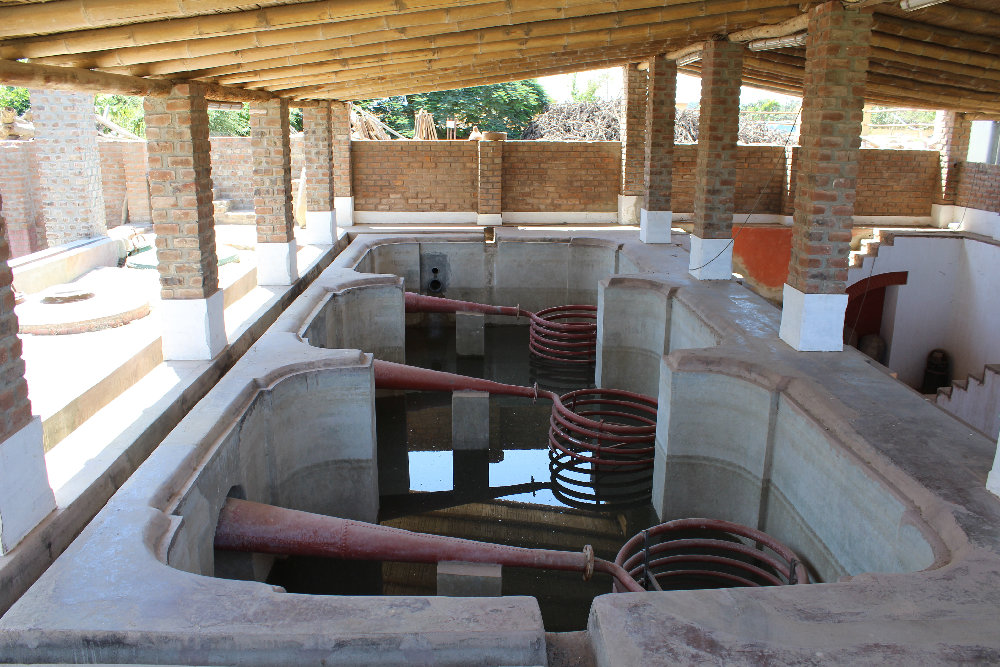 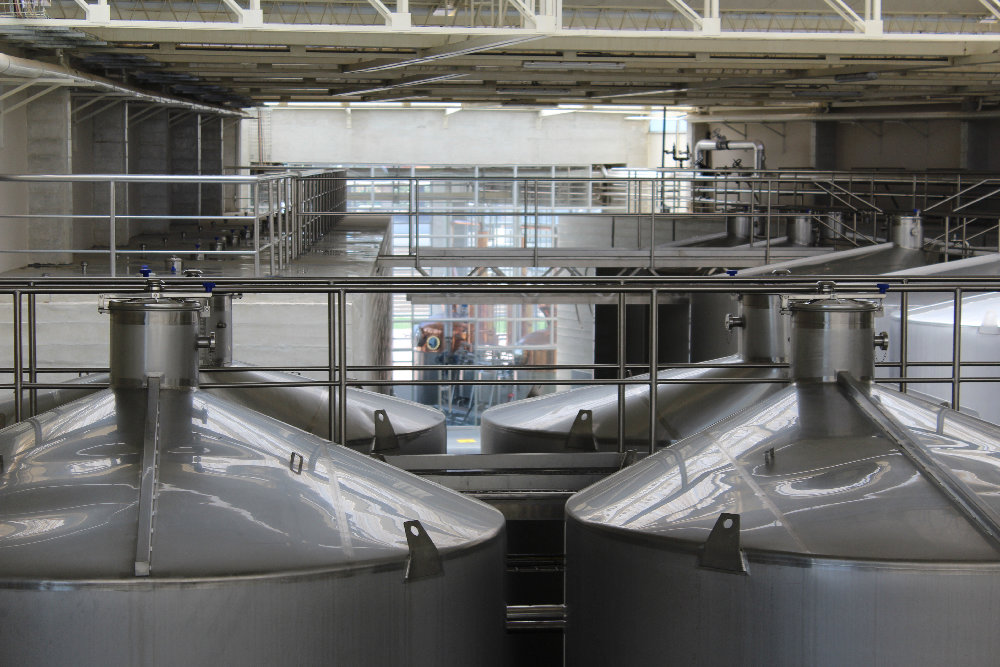 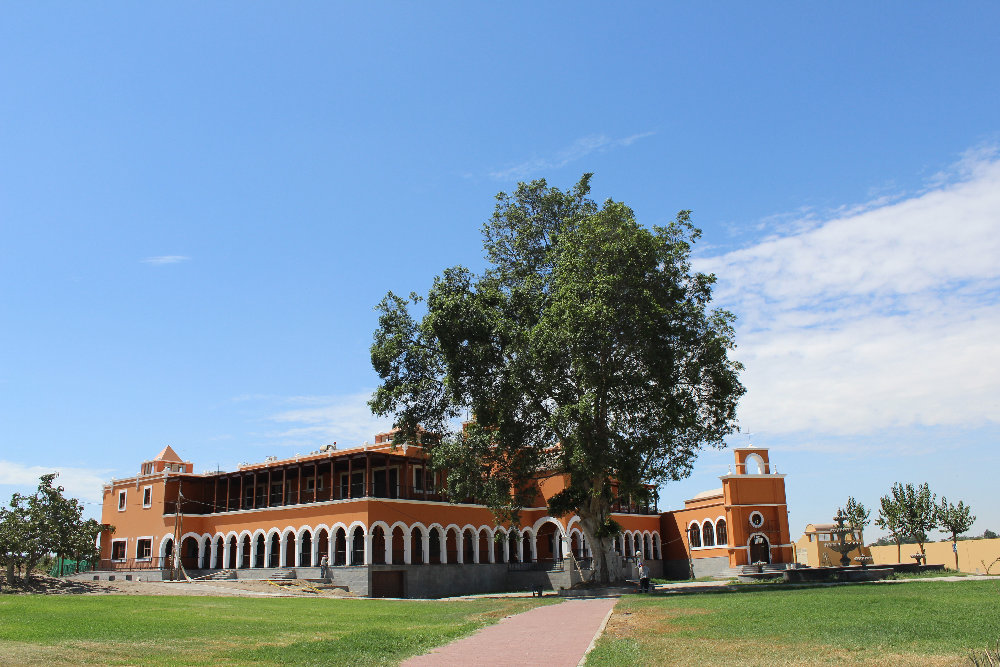 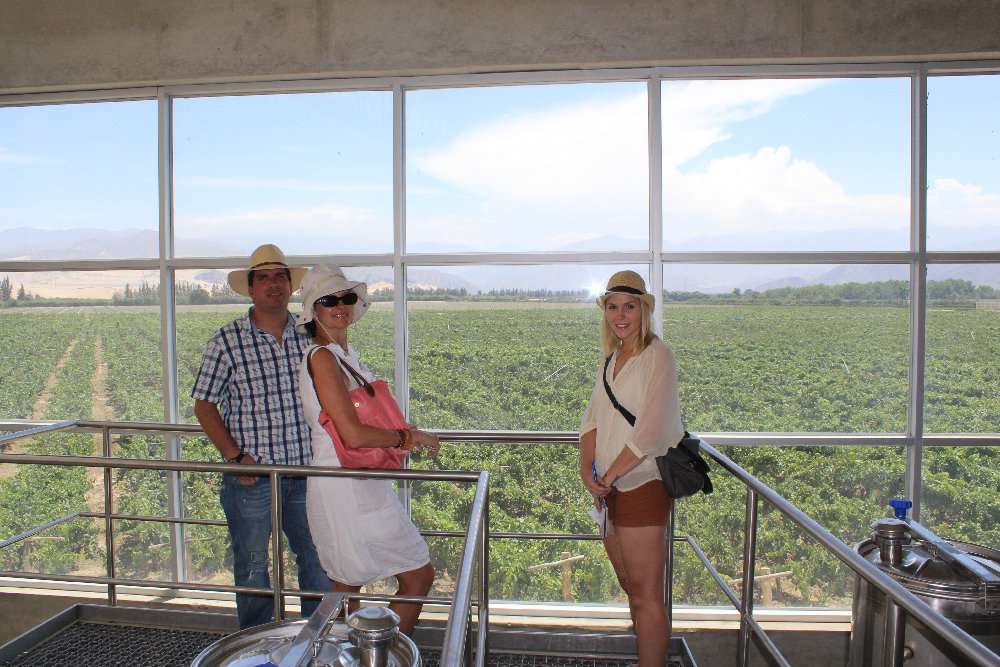 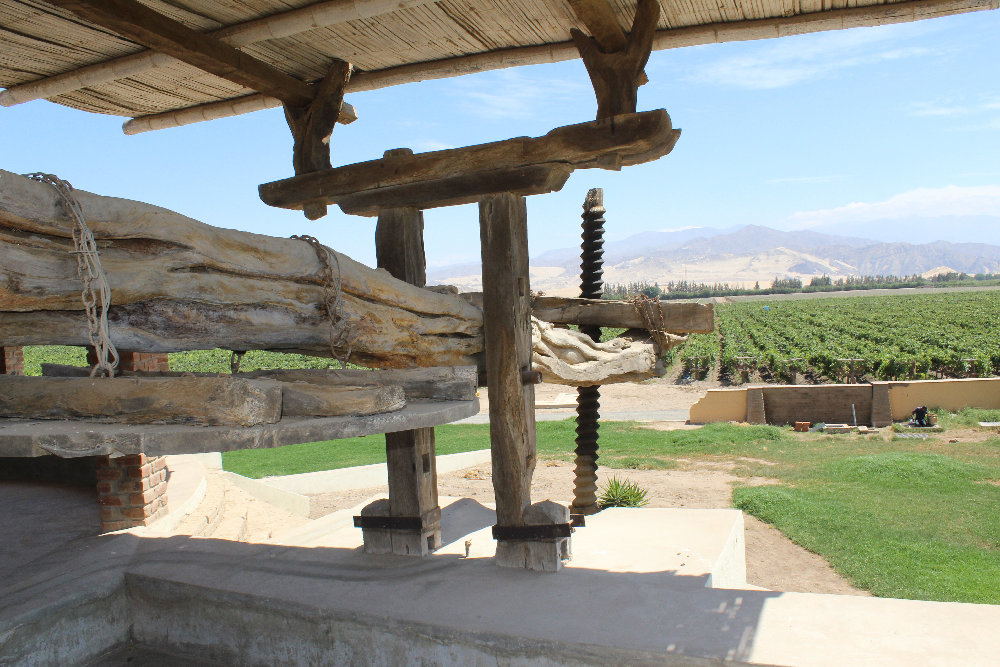 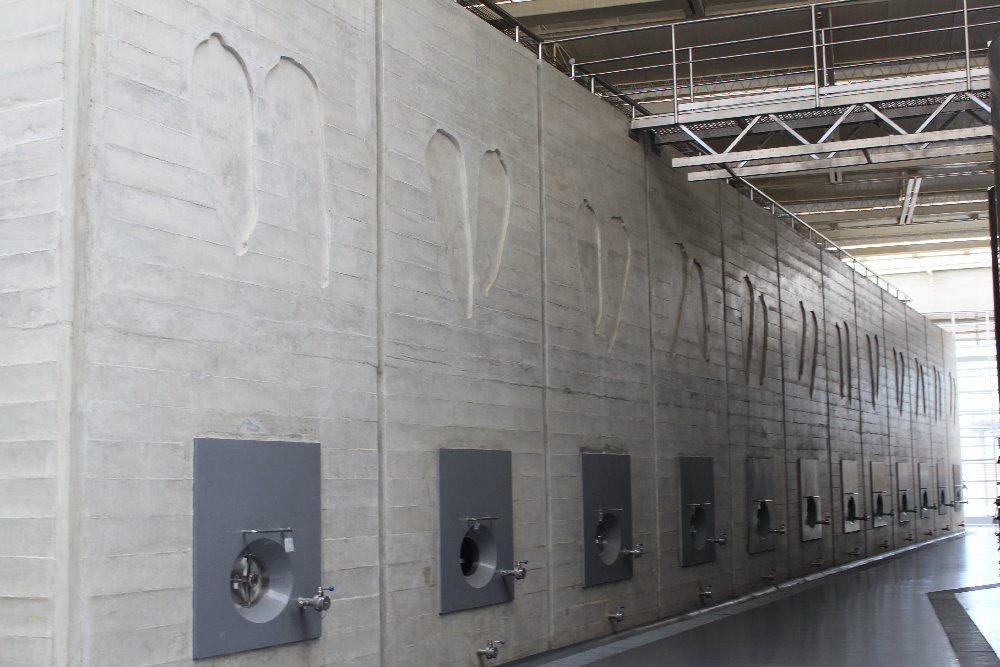 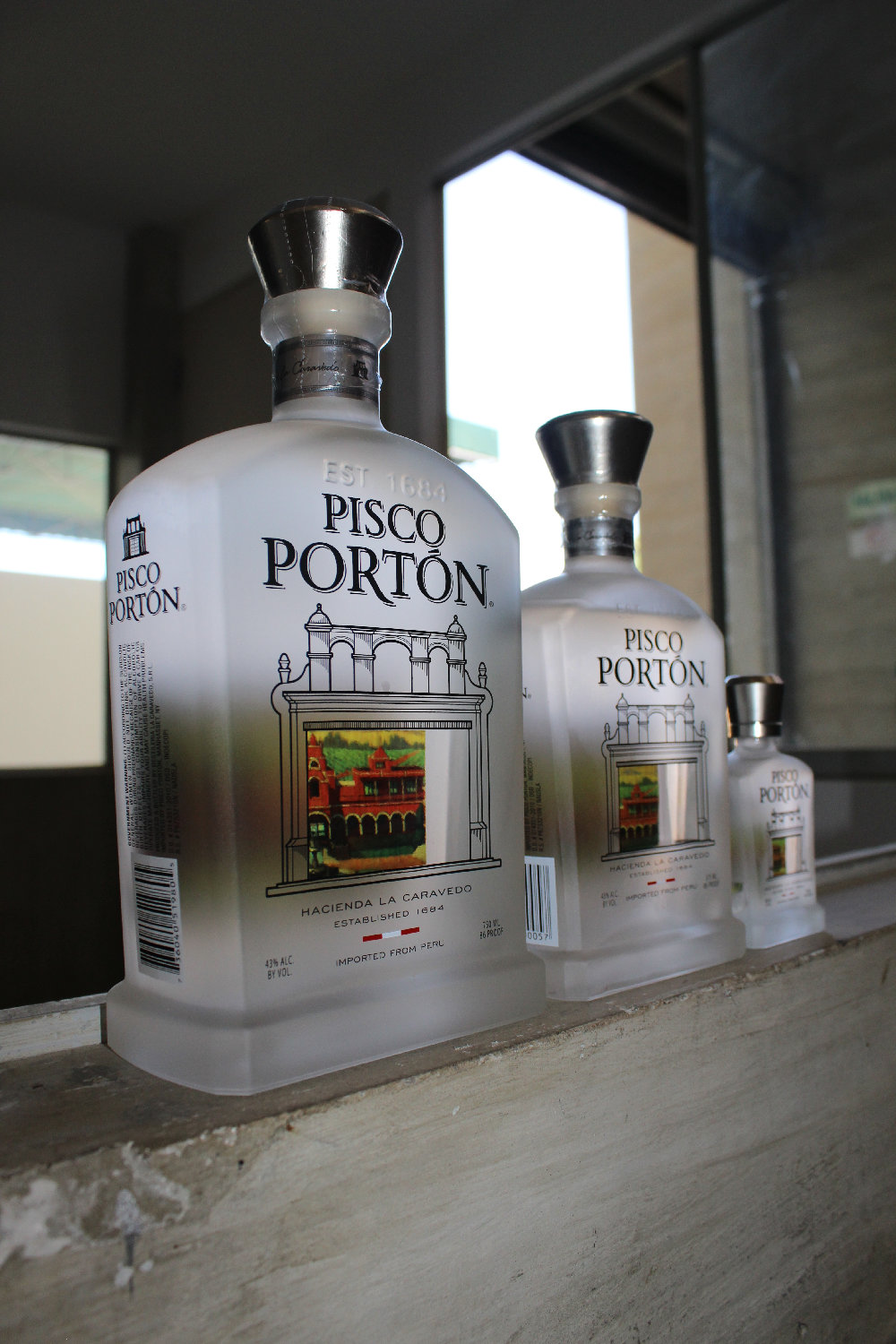 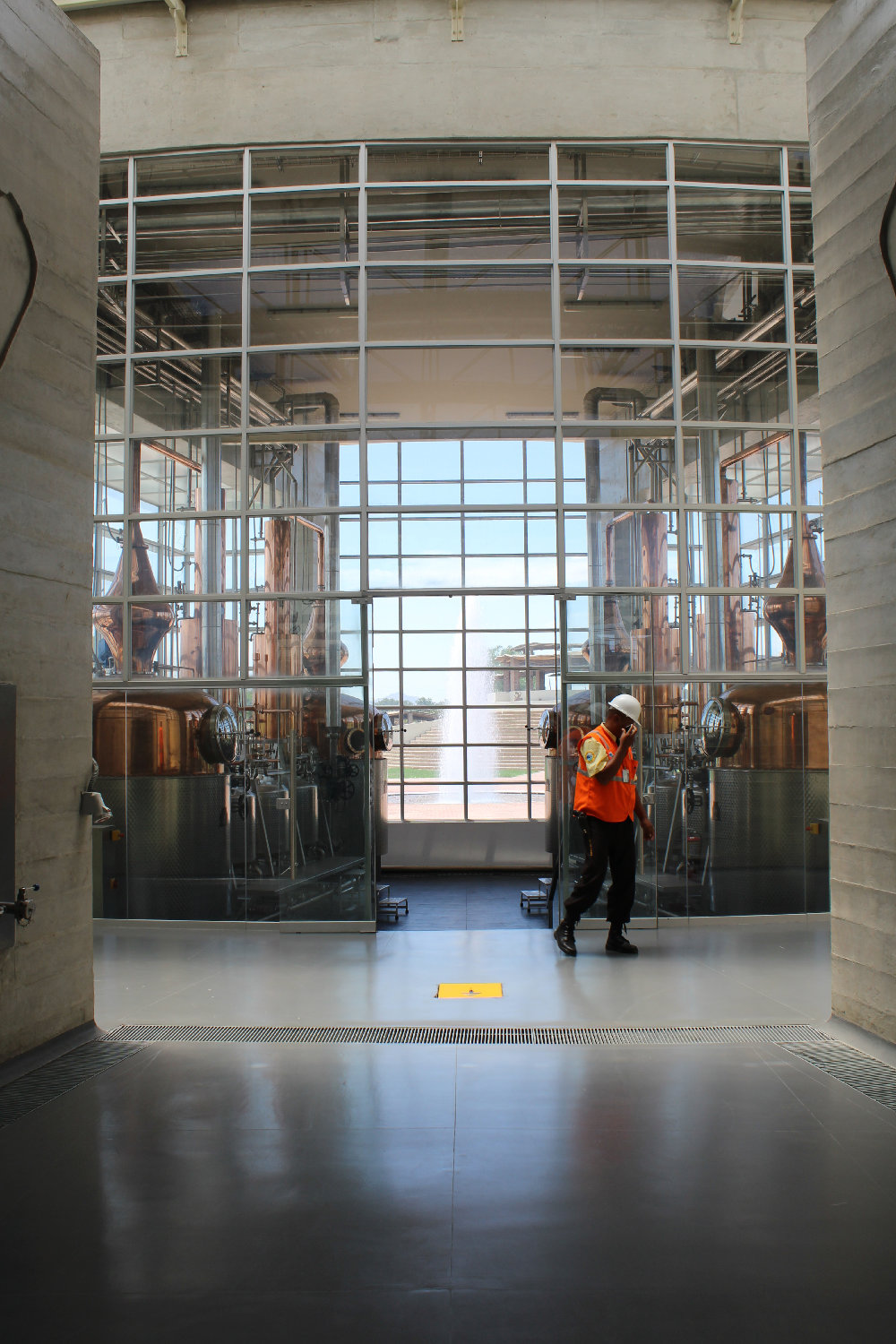 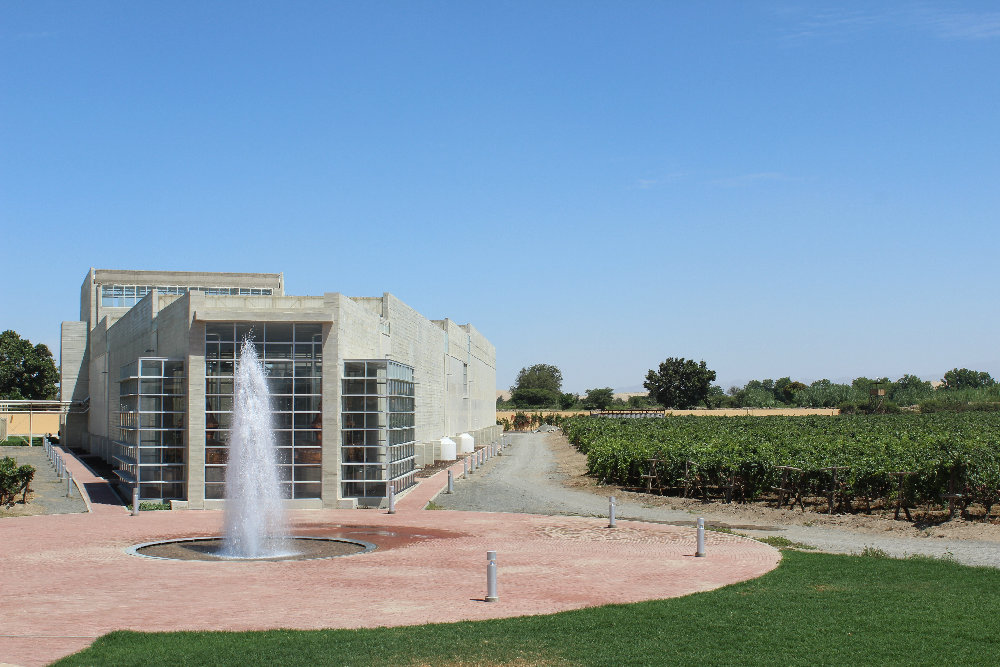 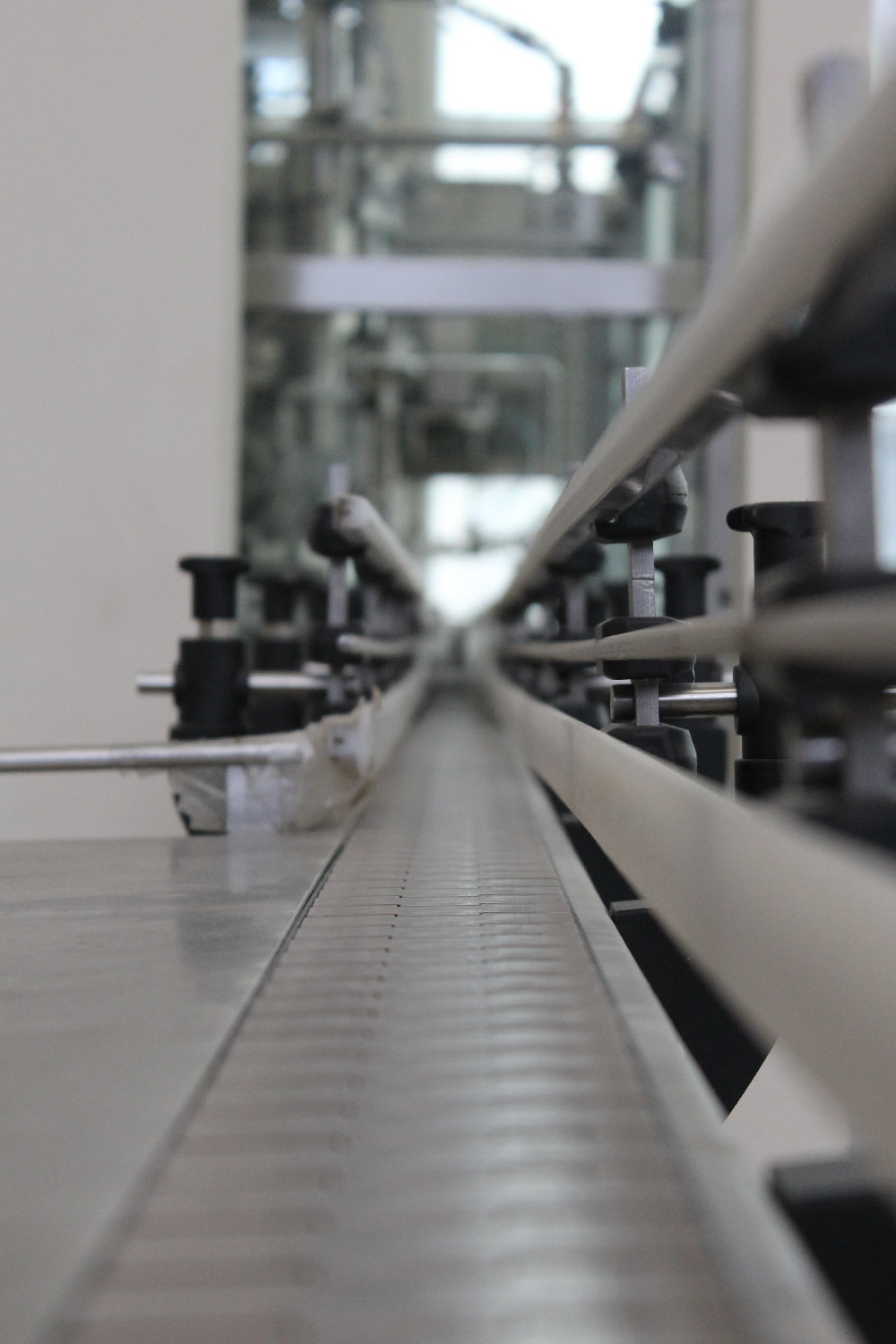 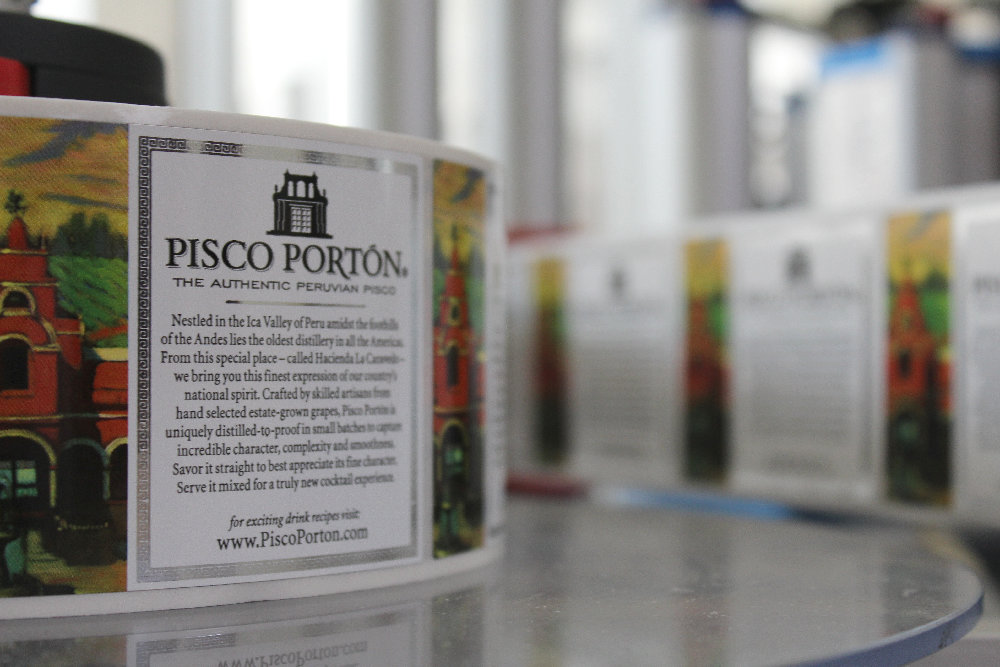 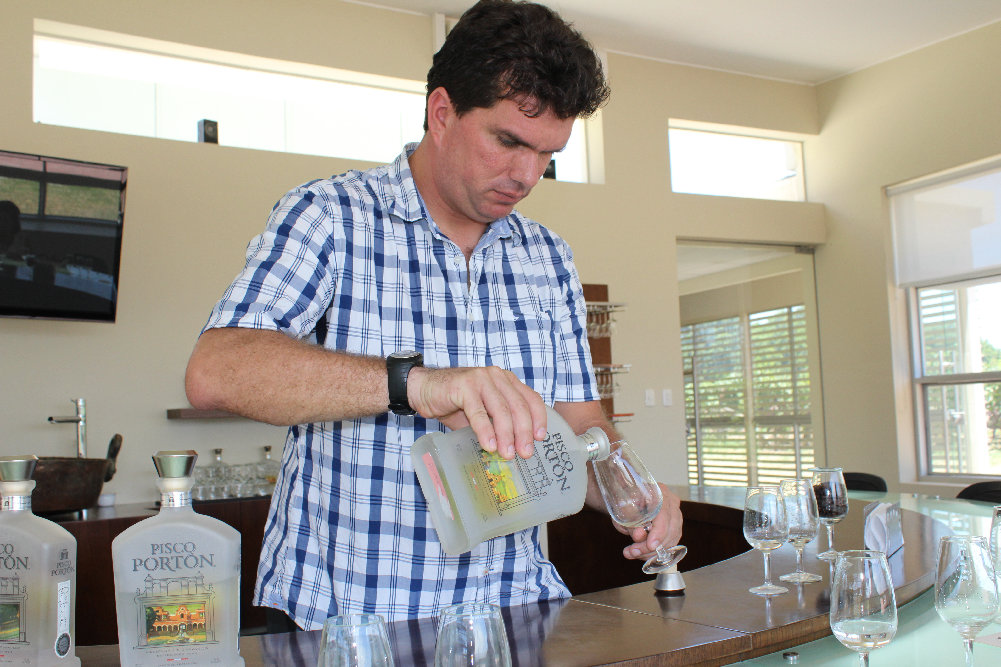 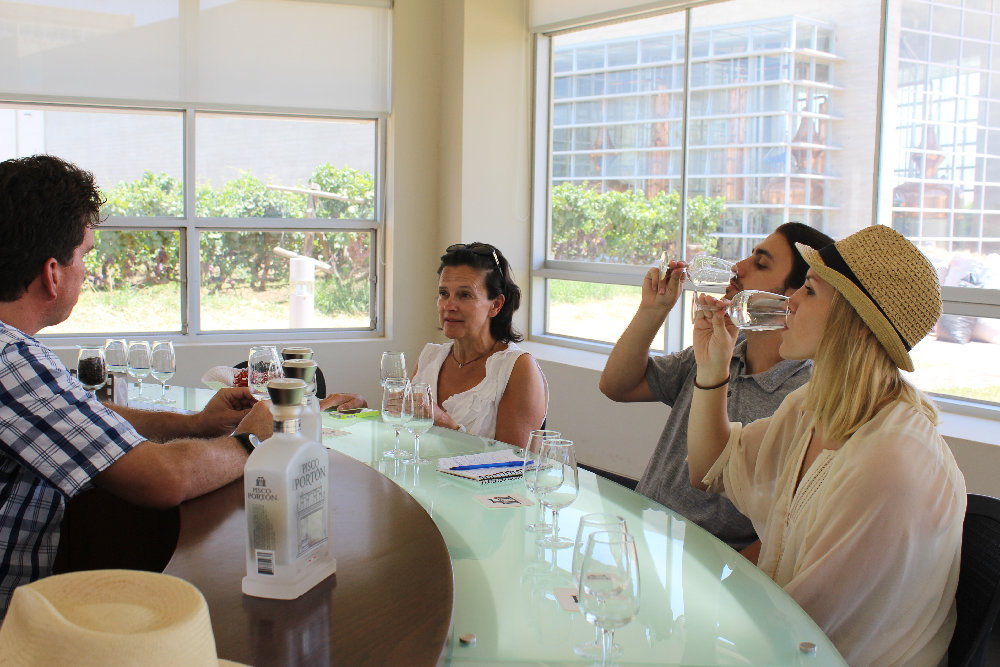 Beyond the house in the distance, Rodrigo pointed out the property’s small ranch, home to several Peruvian paso horses available for rides through the vineyards and for paso horse dancing shows. In the same vicinity, he explained, they are planning to build a small on-site museum to house mummies and some artifacts found during construction.

Thoroughly impressed with the preservation of the historical facilities and the presentation of the new hacienda, we were eager to see what the modern distillation facilities would be like.  As we approached, we encountered a circular brick patio with a beautiful fountain gushing water high up into the air.  Rodrigo joked that this same fountain will one day gush Pisco if Portón becomes as popular as Mr. Shuler predicts, but for now, it remains the central axis from which the newest distillation facilities will radiate.  The first of these idyllic and pristine facilities has already been constructed, with a capacity for producing up to 1.5 million liters of pisco annually and the plan is to build more based on demand.

We entered the facility from the loading docks in the back and Rodrigo began to walk us step by step through the production process.  Schuler handpicked custom-built, state-of-the-art equipment, and constant quality control ensures the product is of the highest quality.  Juicing machines were brought in from Italy, fermentation tanks from Chile, and custom copper tanks from Germany prominently displayed in contemporary floor-to ceiling glass display room. Following distillation, the pisco is then stored in huge non-reactive concrete resting tanks known as cubas de guardia that are decorated with contour drawings of the traditional storage vats known as tinajas and botijas. In the labeling and bottling area, we were impressed to learn that in order to ensure no water dilutes their product, all bottles are rinsed with pisco prior to bottling. Schuler and Portón have made it their business to not only create a delicious product, but an eco-friendly product as well, utilizing rooftop gardens to convert carbon dioxide from the fermentation process into oxygen, gravity-fed channels instead of relying on electric pumps, and a water treatment system that recycles water used in the distillation process.

All that pisco talk and we were ready to see what all the fuss was about.  We were seated around a semicircular table in the beautifully elegant tasting room, with panoramic windows overlooking the fountain and vineyards.  Here, Rodrigo served up an selection of piscos, explaining the subtle differences of each of the different types of grapes and describing the refined distillation process. Portón uses Quebranta, Albilla, and Torontel grapes, each, he elaborated, produced using the mosto verde method of distilling from a partially fermented grape juice known as “must,” which allows for some of the natural grape sugars to avoid being converted into alcohol, leaving more flavor and aroma in each bottle and producing only the highest quality product. One by one, we tasted the varieties, taking breaks between to cleanse our palates.  We were surprised to find such diversity in flavor and aroma profiles, from the fruity aromas and velvety smooth textures to one that was earthy and had a little more bite (and are often used to make cocktails).  If it wasn’t so early in the morning and we didn’t have other visits planned, we would have been utterly content in the sleek, air-conditioned room enjoying the delicious pisco for the rest of the day…

A brilliant start to our vineyard and distillery inspection trip, Pisco Portón exceeded all of our hopes and expectations. We were thoroughly impressed with the immaculate and arresting facilities, indicative of the passion and the professionalism of the company. With a delicious product to match this integrity, we are certain that the future will be bright.

Stay tuned for our experience at the Tacama Winery and to learn how you can include a pisco and wine tasting experience into your trip to Peru.

How the Incas celebrated New Year Aracari's Weekly Insight The Question: How did the Incas celebrate New Year? The Answer: Despite the distinct lack of fireworks, staying up ...
Astrid & Gaston Lima Opens Casa Moreyra The new Astrid & Gastón Lima officially opened its doors to the public today in the San Isidro district after a few delays and much eager anticipa...
Sailing: An Alternative Lima Adventure The perfect adventure travel Peru There’s nothing like sailing the Pacific seas… Several weeks ago, I had the wonderful opportunity to go sailing ...
Central and Astrid y Gastón Make the Cut: San Pelligrino Top 50 Restau... Restaurant Magazine's annual San Pellegrino World's 50 Best Restaurants were announced a few days ago, and we were very excited (though not surprised)...
Travel to Machu Picchu with writer John Hemming in April 2011 2011 marks a century since Hiram Bingham first came across the ruins of Machu Picchu, and exciting events will take place across Peru to celebrate the...
Giving Back in the Sacred Valley: Asociación Sol y Luna At Aracari, we dedicate ourselves not only to providing the best experience for our travelers, but also by supporting local initiatives that make a po...
Previous postMAC Barranco – Contemporary Art in Lima
Next postNazca Lines tour from Lima