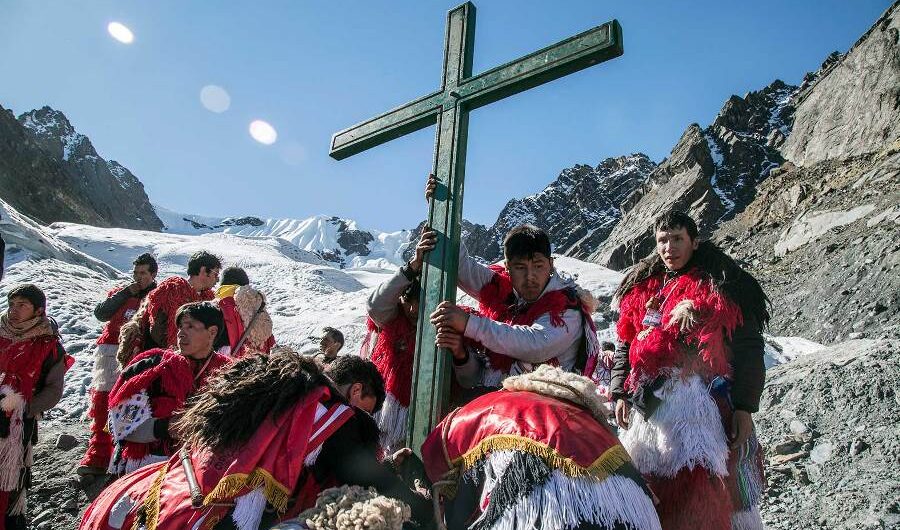 June through September marks festival season in Peru, an especially vibrant time in which you’ll find large-scale festivities and celebrations in cities across the country. Here are some of the most notable festivities of the season, and how to experience them to the fullest.

Festival Season Kicks off in Peru

Each June, the city of Ollantaytambo celebrates the Festivity of the Señor de Choquekillka. The festivity is meant to honor the city’s patron saint and the Pentecost, a holiday marking the descent of the Holy Spirit and the end of the Easter season. This historic city in the Urubamba Valley is scenic all on its own, so when you add in the bright colors and enthusiasm of a festivity, it’s truly a sight to behold.

During the four-day festivity, worshippers will carry a cross with the image of Señor de Choquekillka from Ollantaytambo’s main plaza to the Temple of Santiago the Apostle. The procession is accompanied by music, and you’ll find dancing, masses, fireworks, and even bull fights throughout the festivity’s four days.

The festivity highlights the syncretism between Catholic and indigenous traditions that characterizes many Peruvian faith systems. You’ll find food, observational rituals, and music that combine traits of both faiths, including more than 16 special dances that honor important aspects of Peruvian and Ollantaytambo history. Dancers are treated to meals and drinks by local sponsors, and as day turns to night, locals let their hair down and celebrate into the evening. If you want to see the special dances up close, be sure to arrive to the plaza early to get a good viewing spot!

Corpus Christi is Cusco’s most notable religious celebration, and a treasured highlight of festivity season in Peru. The holiday of Corpus Christi is celebrated by Catholics around the world, and it takes on a very special significance in Cusco. The whole city is welcome to participate – and often does. The city’s main square, Plaza de Armas, is not fenced off to spectators as it often is for other festivities, so locals and visitors alike can walk right up and join in on the action.

The festivity is a delight to experience, but as a visitor, you’ll enjoy it most if you’re accompanied by a guide who can help explain the cultural significance of the many intricate steps of the celebration. The main focus of the festivity is a procession that features 15 images, each of which represent a different local church. Thousands of Cuzquenos follow the procession through the city streets with flowers and offerings on hand.

Locals often gather on balconies along main streets to watch the procession from above. You’ll also see lots of Cuzquenos eating chiriuchu, a traditional Corpus Christi dish that combines a delicious heap of ingredients like chicken, guinea pig, corn, and jerky. The statues at the center of the procession will remain on display outside the Cathedral for a week after the celebration, so if you don’t get a close enough peek during the festivities, you can always take a look afterward. 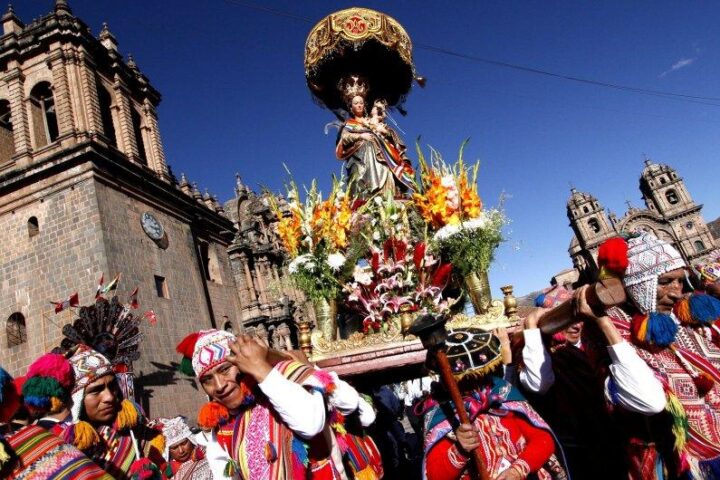 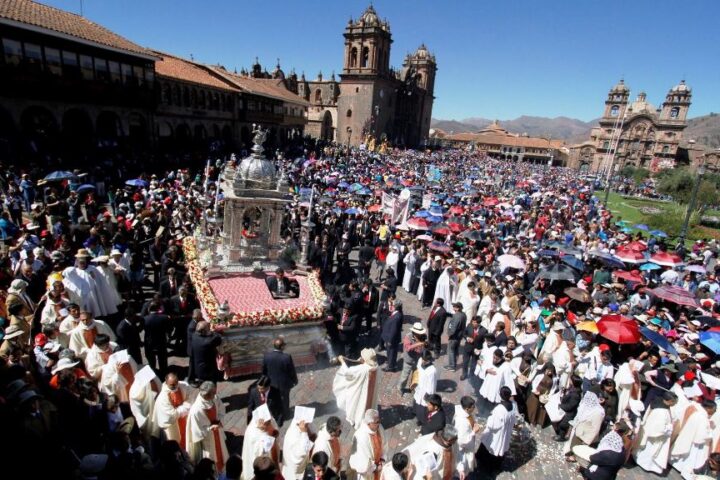 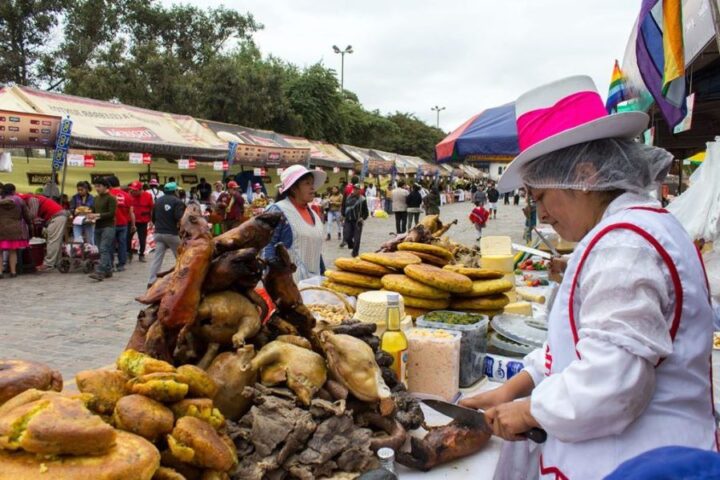 Inti Raymi is known as the festivity of the sun, and it’s believed to have been one of the most important rituals of the Inca Empire. Today, it’s one of the most vibrant festivities in Peru. When the Spanish arrived in Peru in the 1500s, they banned the Inca from practicing Inti Raymi, but the tradition was brought back in 1944 and reconstructed based on historical recollections.

Every year on June 24th, the celebration is held in Cusco and Sacsayhuaman, an Inca citadel just north of the city. The occasion is intended to honor Inti, the Incan sun god. Inti Raymi is a celebration of the Winter Solstice, which marks the return of longer, sunnier days and the beginning of a new year for the Inca.

At the celebration, you’ll see a reenactment of Inca rituals at Koricancha, the Cusco archaeological site that served as a vital temple in the Inca empire. The reenactment is carried out by hundreds of dedicated actors, one of whom plays Sapa Inca, the Inca ruler. Sapa Inca leads the ceremony, and afterward, the crowd carries him on a golden throne to the Plaza de Armas in the center of Cusco. Then, the crowd of hundreds make their way Sacsayhuaman to take part in a ritual and speeches before headed back to the Plaza de Armas to celebrate. The celebration is marked with a week of street fairs, folk dances, concerts, and plenty of delicious food. 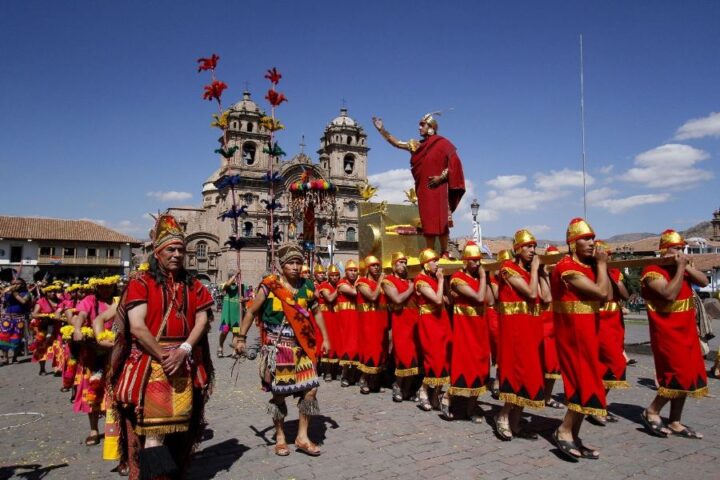 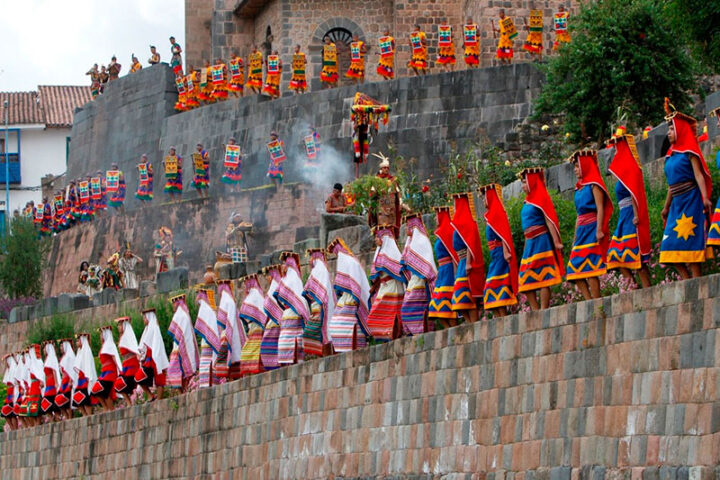 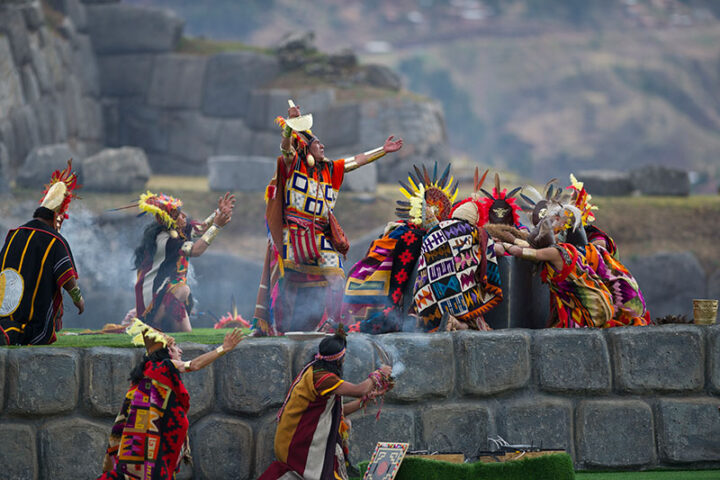 The Qoyllur Rit’i festivity is a special high-altitude pilgrimage. The event is held each year on Ausangate Mountain in the Sinakara Valley, where a young boy named Mariano Mayta is said to have seen the image of Christ in 1780. To mark the event, pilgrims make a rigorous trek up the mountain’s north face to the location of the sighting. The journey takes 2-3 days, with stops to camp overnight along the way before finally reaching their destination around 5000 m (about 15,400 ft) above sea level. The event honors both the Lord of Qoyllur Rit’i as well as the spirit of the mountain, combining both Catholic and Andean traditions. The festivity is known as the largest indigenous holiday event in the Americas. 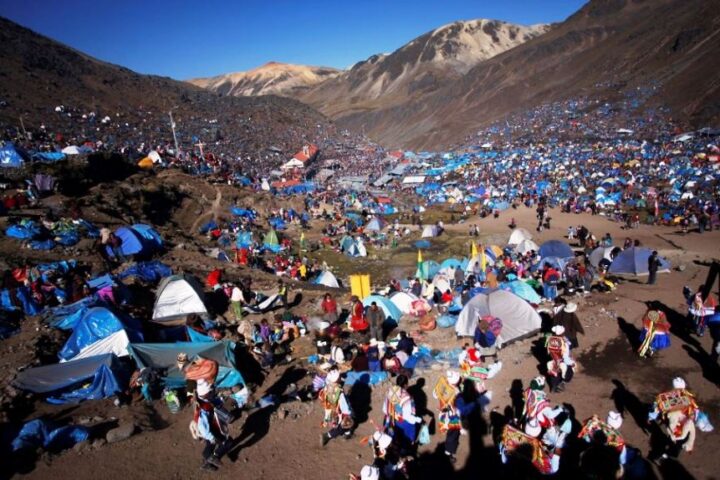 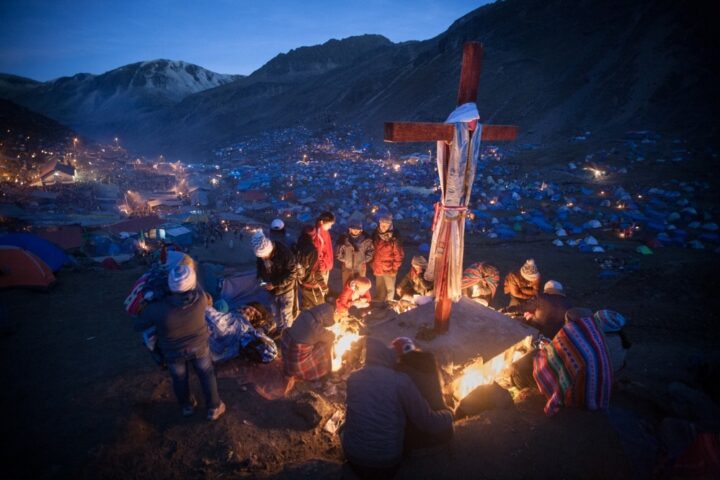 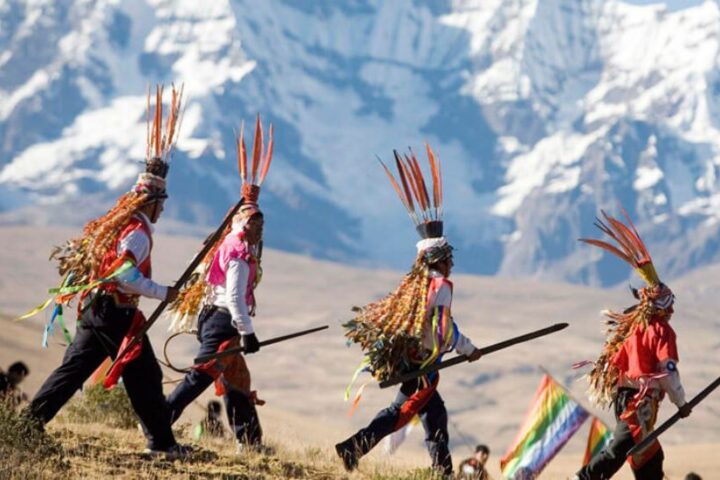 Held in the town of Paucartambo each year in mid-July, this festivity blends Andean and Catholic traditions to honor the Virgin of Carmen, who is known as the patroness of seamen and fisherman. The city is about four hours outside of Cusco, but Fiesta de la Virgen del Carmen is known as one of the most epic parties in the country, so it’s well worth the journey. Each year, the city packs to the brim with visitors and hotels book solid. At the festivity, you’ll see folk dances, traditional costumes, and songs – many of which depict powerful and somber moments in Peru’s history.

Virgen del Carmen is celebrated in many other towns and villages throughout Peru, such as Pisac in the Sacred Valley of the Incas. 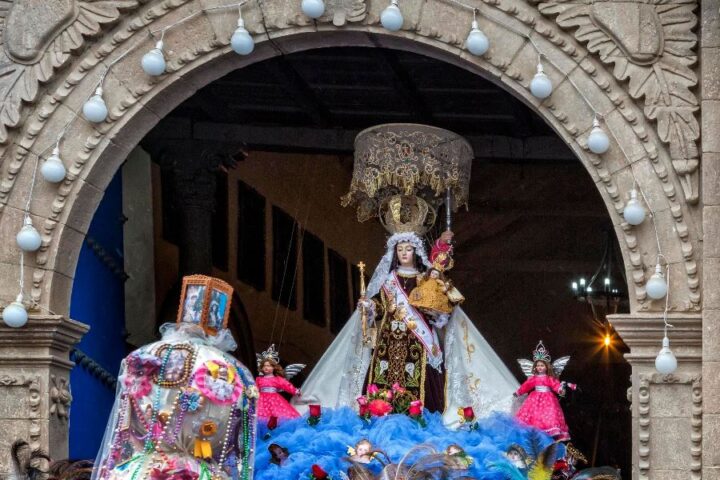 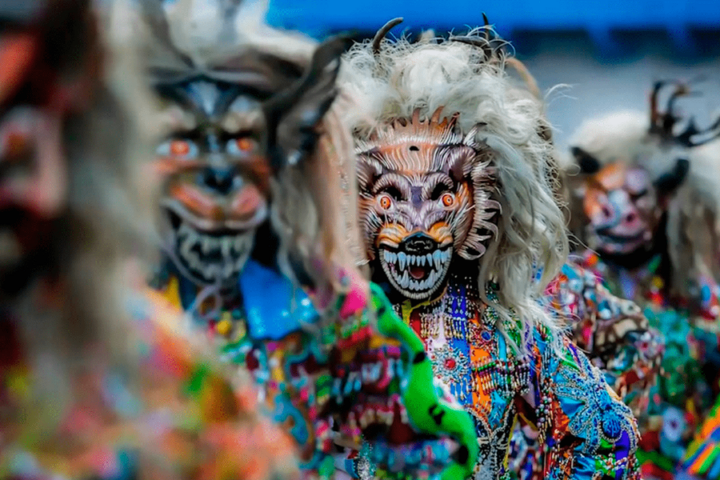 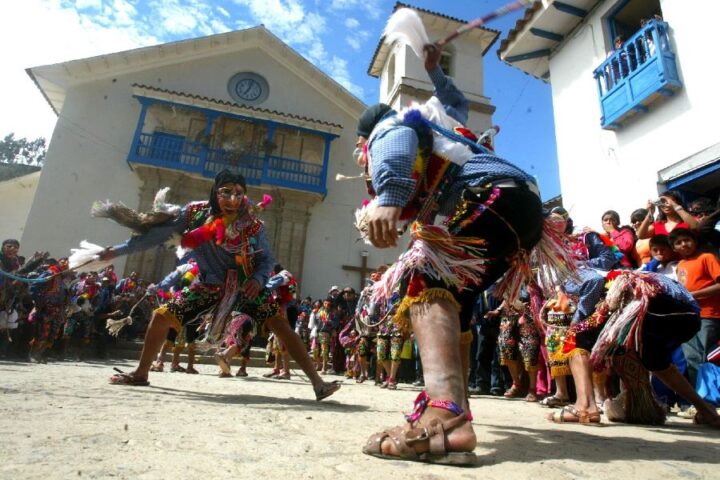 Santa Rosa de Lima is known as the first Catholic saint canonized by the Church to be born in the Western hemisphere. While she is celebrated worldwide, her native Peru takes the cake for the most exciting festivities. Each August 30th, you’ll find vibrant, passionate celebrations throughout the country. The most popular celebration is in Santa Rosa de Quives, just outside of Lima.

October is called “the purple month” in Lima, as this is the color of the Señor de los Milagros, Lima’s Patron Christ. October is his month and a visit to his Temple, Las Nazarenas, located in the Centre of the City is a unique experience. Crowds of people flock to worship his image in the temple and street vendors sell candles, rosaries and a variety of objects with his image. Dozens of stalls sell Turron de Doña Pepa, a very sweet local delicacy. A very early visit is recommended as it can get very crowded later in the day. 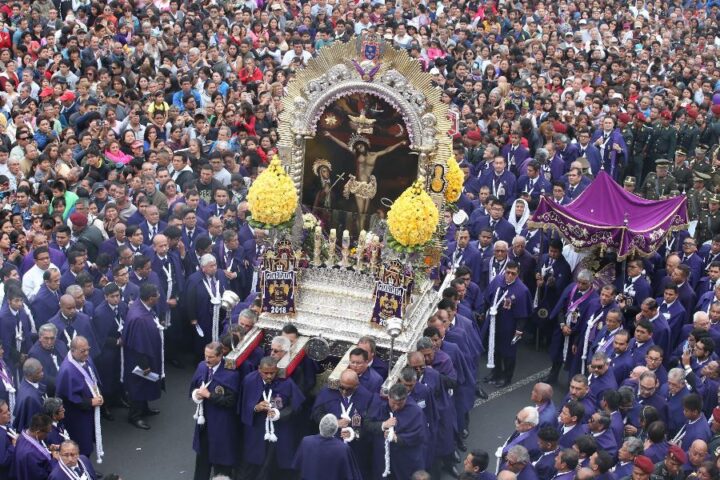 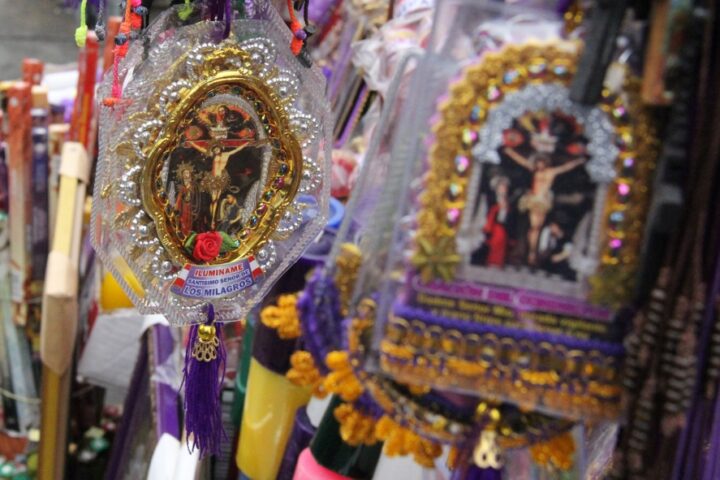 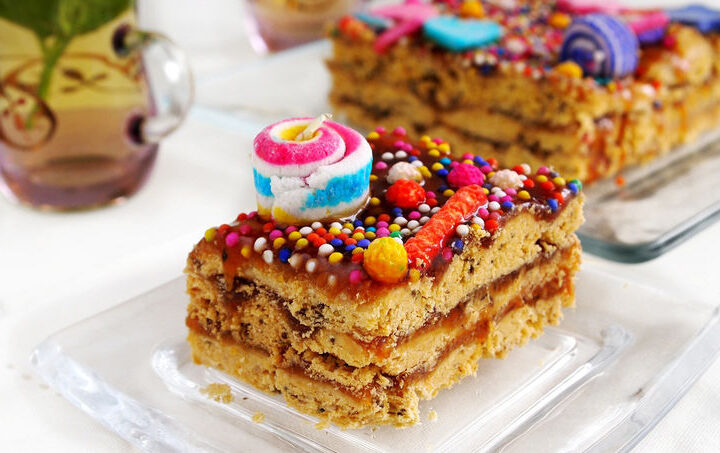 Bajada de Reyes in Lima and Ollantaytambo Every January 6, Peruvians celebrate Bajada Reyes to conmemorate the arrival of the Three Wise Men to the Nativity and the gifts they brought to the n...
New Years in Peru: Traditions & Celebrations Some countries have one or two New Year's Eve traditions, but New Year's in Peru has traditions a dime a dozen. The night before welcoming the New Yea...
Inti Raymi Festival in Cusco Peru festival, Inti Raymi Today marks the colorful celebration of Inti Raymi, or the “festival of the sun,” thought to have been one of the most impo...
La Diablada: Colorful Dance of La Candelaria Festival in Puno Festivals in Peru, La Diablada At this time of year in Peru, many colorful festivals begin leading up to Holy Week. One of the most famous takes plac...
Señor de los Temblores Procession in Cusco In a country with a depth and complexity of history as Peru, ancient and deep-rooted religious beliefs vie with the official national religion of Cath...
How To Celebrate Corpus Christi In Cusco Every year, Cusco celebrates the movable (in 2019 it is on June 20)  Catholic holiday of Corpus Christi, in a grand way.  The Feast of Corpus Christi ...
Tags: festivals in peru
Previous postCommunity Based Tourism In Peru: The Achupalla Experience
Next postHow To Celebrate Corpus Christi In Cusco