The Interoceanic Highway: pros and cons for Peru’s southern rainforest

Amongst the most bio diverse regions of the planet, the Western Amazon rainforest and the corridor of national parks between Peru, Bolivia and Brazil offer an unrivalled experience for the adventurous traveller and anyone with an interest in nature and wildlife. In parks such as Manu, Tambopata and Madidi, it is not only possible to witness the diverse flora and fauna of the rainforest, but to experience raw, unfettered wilderness in what is still a relatively isolated part of the planet.

In 2013, this may well all be in the process of changing. The Interoceanic Highway, a network of roughly 2,600 kilometres of road stretching between the Atlantic and Pacific Ocean – and traversing directly through the rainforest in southern Peru – for the first time directly connects booming industrial cities in Brazil to ports on Peru’s south coast. It is hoped that this grand project will not only ease the trade of commodities between the two South American nations, but also give Brazilian manufacturers and producers more direct access to Asian markets. 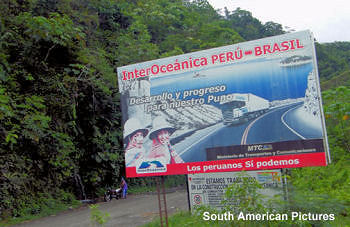 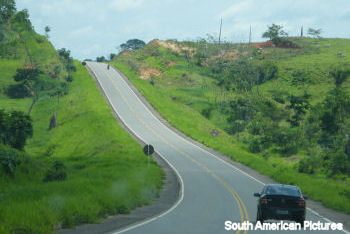 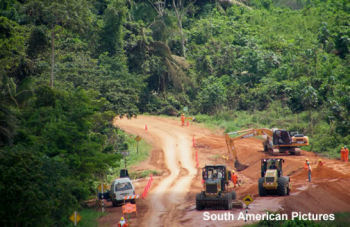 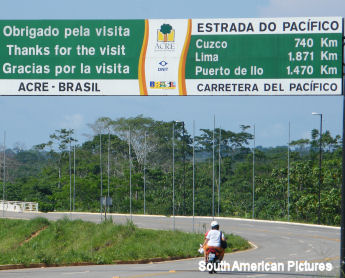 Aside from the fact that the road has been a remarkable feat of engineering, there is wide support for the highway locally in Peru. The economic benefits of being directly connected to the giant Brazil are widely lauded; more money is arriving with investment in regions of the southern Peruvian Amazon, improving the quality of people’s lives.  I recently visited the town of Puerto Maldonado, one of the main transition points of the highway. The local people that we talked to were generally excited about the new influence from Brazil, listening to popular music from their Amazonian neighbours and sporting the latest fashions from Brazilian clothes manufacturers.

For others, as portrayed in an article in the Wall Street Journal last week, the highway presents exciting new travel opportunities and the enticing possibility of cruising between the Andes and the Amazon along the “21st century’s route 66”. It will also open up new areas to tourism in the southern Peruvian Andes and Amazon, to the north of Lake Titicaca and in the southern area of the Cusco region.

Despite these benefits, others have voiced strong concern about the unprecedented access that the highway will give to areas of the jungle previously only traversable by river. Chief amongst these concerns is that a paved highway will make it much easier for settlers and developers to contribute to massive deforestation while acquiring timber and clearing lands for raising cattle and extensive soya plantations. Illegal gold mining – already booming around Puerto Maldonado – will also be facilitated further still, it is feared.

Deforestation can already be widely seen alongside similar roads across Brazil, and it is thought that, with the highway, this process will now extend deeper into the western Amazon and ultimately to primary, virgin rainforest that was previously inaccessible. The added worry is that deforestation can only be exacerbated if fuelled by high demand for resources from Asian markets.

In November 2012, Tony Morrison and John Forrest gave the Anglo Peruvian Society in London a detailed talk on the InterOceanic Highway one year after it was inaugurated. Based on their extensive experience of travelling in the area, they demonstrated the impact that the highway is already having on the inner reaches of the Amazon and the Madre de Dios region.

When I visited the Tambopata Research Center back in December the experts I spoke to there were not able to gauge how much impact the highway – mere dozens of kilometres away from the lodge – was having on populations of Macaws and other wildlife. In addition to seeing what economic benefits that the highway will bring, only time will tell what effects there are on the precious tracts of virgin rainforest in the region and whether negative impacts can be mitigated.

Many thanks to Nonesuch Expeditions and The Anglo-Peruvian society for their investigation of the issues surrounding the InterOceanic Highway.

Kuelap Peru: The Ancient Cloud City Standing at the top of ancient walls overlooking the cloud forest below, you really get a sense of the mysticism of Chachapoyas, and why the ancient p...
A Visit to Casa Garcia Alvarado Lima is home to a range of exclusive private homes. Casa García Alvarado is a Republican home in the heart of Miraflores that welcomes visitors behind...
Aracari trip to Kuelap and Chachapoyas Marisol, Founder & CEO of Aracari, and the Aracari team are just back from an in-depth research trip to Kuelap and the Chachapoyas region. We've b...
Sacred Valley Responsible Travel with Awamaki For a truly authentic day in the Sacred Valley, I highly recommend you join Ollantaytambo based NGO, Awamaki, for a weaving experience and village vis...
Contemporary Art In Peru Will Be Honored On The World Stage At ARCOmad... Aracari has long been an enthusiastic supporter of contemporary art in Peru. Over the years, we've supported the work of countless talented Peruvian a...
Maria Julia Raffo – Peru Gastronomy Expert Culinary Travel in Peru Aracari’s Peru Gastronomy expert and PR advisor, Maria Julia Raffo, tells her part of the Aracari story. She shares what it's...
Previous postHot Off the Press – Ceviche: Peruvian Kitchen
Next post2013 Summum Peru Culinary Awards