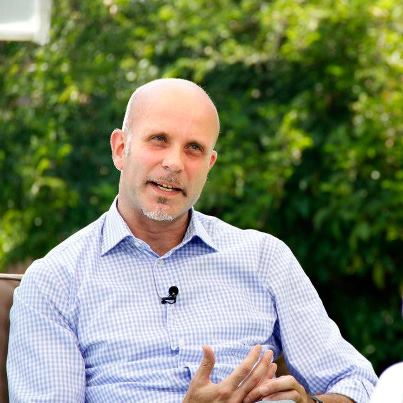 Ronald Elward is a Dutch expat and one of Aracari’s specialist guides in Lima, leading visitors to the capital on a historical city tour, which showcases the unique past of Lima.

For many years Ronald has been busy digging deeper into the connection between the past and present in Peru: he has taken it upon himself to sift through archives to establish the living descendants of the Inca rulers. His research has resulted in over a dozen articles in the main Lima newspaper, El Comercio, and a book that presents his research, linking the lineages & ancestry of families to the royal Incas who seemed to disappear after the conquest of Peru in the 16th century. This research has earned him the honorary title of “Caballero Orejón de la Ordén Real de los Incas”, which basically endows him with the status of an Inca noble or orejón as they were called.

We were able to catch an hour of Ronald’s time to sit down with him and talk about his insights into Lima, his experience finding the Inca descendants and more.

Before coming to Lima, you worked in the Netherlands doing…?

I was publisher for almost ten years for two of the major publishing houses for information for professionals. And there I was the publisher for the main magazine for architects called De Architect. I had studied marketing, so I entered publishing through the marketing department.

What made you decide to move to Peru?

Well I always liked to travel, and I’ve travelled to most continents. I had the desire as of young to experience another culture, more than just on holiday only it never came about. I immediately started working as soon as I was finished school so it was always work. I did very well, but in the end I felt life should not just be about working a lot of hours a day, making a lot of money, being tired and then going once a year on a nice holiday somewhere else. I turned forty and I thought well now is the moment to go make a change. I worked since I was twenty-two or so, so I had saved enough and thought now let’s go somewhere, and I chose Peru because I like old cultures. I had been here on holiday and I thought it’s an interesting mix of indigenous culture and European culture. I moved in July 2008.

How did Lima Walks begin?

I had traveled all around Lima in my first year here because I was interested in the history of the place, especially in the architecture because that’s my background as well. My second year I looked into starting a new business. Organizing walking tours is not that complicated, so that was my first activity to start based on the information I had. I started the Lima Walks website with 9 tours because I wanted to do it professionally, like a real product. All of the tours were two hours, all had a theme, all had the same start and ending point, and all were focused on architecture and history.

Now it’s 16 different routes. Two are more culinary oriented, and the other 14 more architecture and history because basically every neighborhood has interesting aspects. And also to show a bit more of Lima than the obvious sights. When I started, I started with Barrios Altos and Rimac and those are two neighborhoods that nobody had done before. And a lot of tourists and also expats like to see the “real” Lima.

What is your favorite neighborhood in Lima for tours?

I like Barrios Altos personally because you have the indigenous context, you have the Stone of the Devil, the remains of the old Huaca, then you have the Afro-Peruvian museum and evidence of the black population and many famous musicians that lived there. You also have the Italians who live there, and you have Chinatown as well. So you have a lot of different populations, you have several churches, three convents that are still cloistered, and in one they make alfajors. On weekdays, you can taste an alfajor [cookie] made by cloistered nuns, which is impossible to get in the US or Europe. You have a lot of elements that are popular and all different people who lived there and left their stories, and you have all of these kinds of elements that link to the Colonial past and the Republican period, which makes it very diverse.

How did your research on the Inca descendants come about?

One of the things that I thought of when I was moving here was the history of Peru and the Incas, the most emblematic culture of the country. I wanted to know if had they disappeared for real, or if there are still traceable descendants. During my trip in Cusco in July 2009, I took the phonebook of Cusco, and I called several people. I talked to them and some said, “We are the descendants of the Incas.” So then I asked, “Can you show me?” And they said, “No.” They knew the name of their father and grandfather and then it stopped.

So that’s when I started going to the archives to find the baptism records, the marriage records and the deaths. I went to the notary archives, which has a lot of documents of property to try to find a link with the Incas of the conquest period because that was the challenge—to connect people of today with the Inca rulers of the mid-sixteenth century. There had been some historians who did research on the descendants, but they stopped at the Independence.

I’ve been 15 times to Cusco in the last four years. Every time like 10 days to go to the archives and talk to people, and that resulted in this series of 12-14 articles in El Comercio and a huge database that I’m now processing into a book. Last year I started giving lectures, and now I will give one in London in Canning House, which is the center for Latin American Studies.

When I started, I did not know I would spend so many years doing it , and I thought it would be a kind of dry business to sit in an archive with old books, but the interviews and the whole context of the story of these families make it interesting because you see the history of Peru through their eyes.

How successful was your research?

There was only one group I started interviewing that I couldn’t find the information. With others it turned out that they were from normal families not from Inca rulers.

There were also people that didn’t even know they were descendants of the Incas, for example the Obando family changed its surname, so of course if you lose your Inca surname, very quickly you start losing the feeling that you are an Inca. That is one of the main lineages of the descendants of Huayna Cápac. They were called Ramos Tito Atauchi in the Colonial period, but Ramos Tito Atauchi married a woman named Obando and the grandchildren skipped the first part, and they just continued with Obando. They still knew they were descendants but now five generations later they had lost that connection.

What were the reactions of the families who turned out to be Inca descendants?

The first reactions of the older generation-I spoke to two brothers who were in their 80’s, and one cousin of theirs who was in his 70’s. They were all terribly pleased and honored by the fact that they were descendants of the Incas. One of the sons of them, who was around 50, he at first was not too pleased and wanted to see exactly how did it work. It took him a bit of time to get adjusted to the idea. Also in Cusco it’s not seen always as too positive of being of indigenous origin. He in the end was also positive about it. I have not met anybody that I actually interviewed that was unhappy about it.

Contact us to book a tour of Lima led by Roland Elward as part of a private, tailormade trip to Peru.

Stephanie Borios, Aracari Specialist Stephanie Borios is a French ethno-botonist who was trained in the UK and the US, and currently resides in Lima, Peru. She is an Aracari specialist in...
The Best Easter Celebrations in Peru Aracari is well versed in understanding Peru’s yearly calendar scattered with celebrations, and the Easter period is no exception. In fact, the days o...
Kevin Floerke, Aracari Specialist Aracari is thrilled to introduce you to our photography and archaeology specialist, Kevin Floerke. With 9 years of experience working in Peru, Kevin i...
Andean Culture with Ethnomusicologist Holly Wissler Specialist Guide Holly Wissler Holl Wissler, an ethnomusicologist, is one of Aracari's specialist guides in Peru. Her academic research and wealth of...
Traditional Peruvian Art and Craft – Handmade in Peru One of Peru’s best kept secrets is the exquisite, handmade collectables produced here. From cotton to clay, the country is rich in raw materials and f...
A Visit to the New Gift Shop and Tearoom at Lima’s Cathedral Lima's Cathedral Gift Shop & Tearoo This August Lima's Cathedral finished renovating the gift shop, and Aracari received an invitation to come se...
Tags: lima city tour Peru Specialist guide
Previous postMarisol Named to 2018 Wendy Perrin WOW List
Next post5 Highlights of Paracas National Reserve