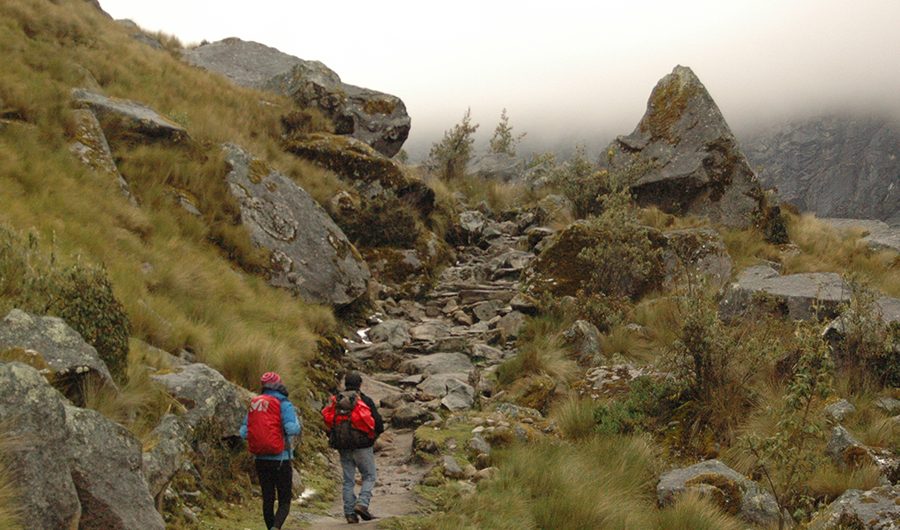 The Cordillera Blanca is one of the most impressive mountain ranges in Peru and arguably South America with 20 peaks that reach over 6,000m in altitude, including Huascaran at 6,786m (22,263ft), which is the highest mountain in Peru and one of the highest in the Americas. This region is a haven for hikers and has a wide variety of day treks and multi-day treks for all skill levels, from those who want to try trekking for the first time and those who are more experienced and want to scale some of South America’s most beautiful mountains. The Cordillera Blanca’s Santa Cruz Trek is a relatively easy multi-day hike, camping in spectacular mountain scenery.

Hiking the Santa Cruz Trek in the Cordillera Blanca 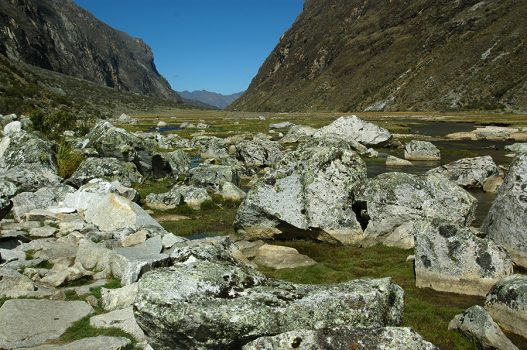 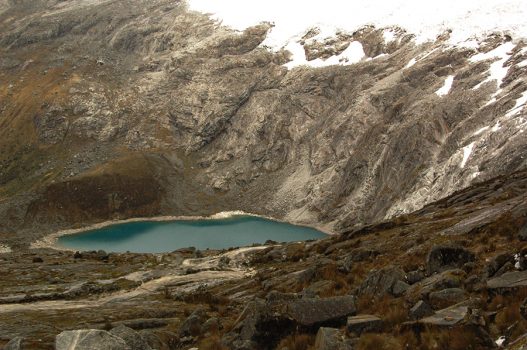 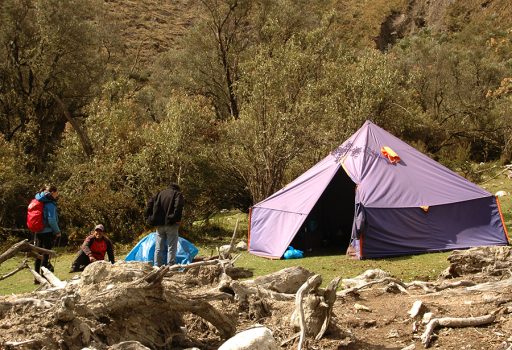 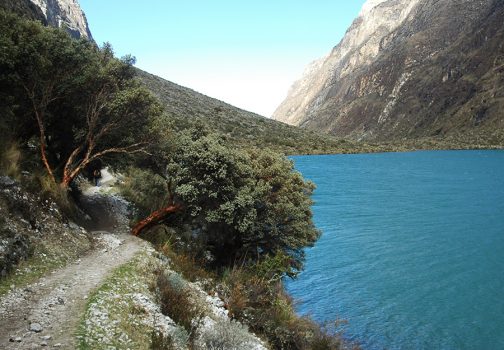 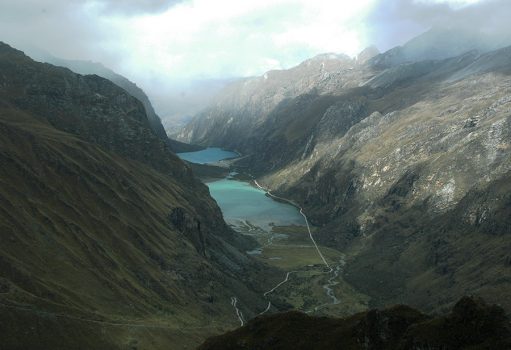 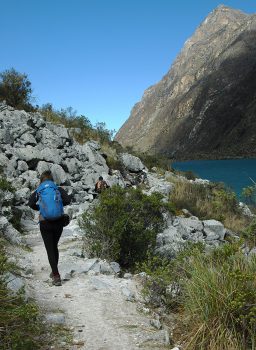 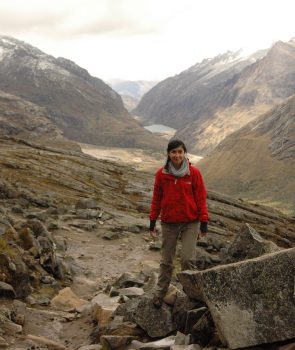 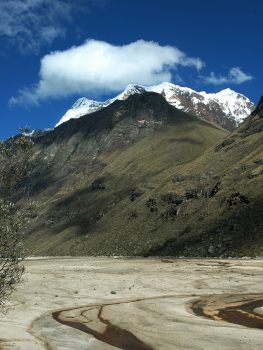 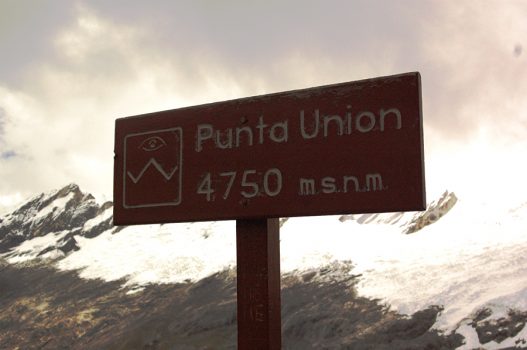 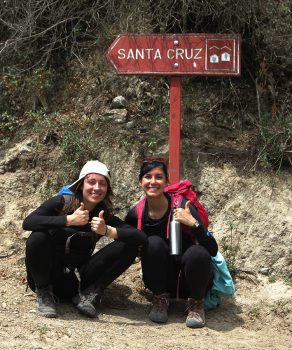 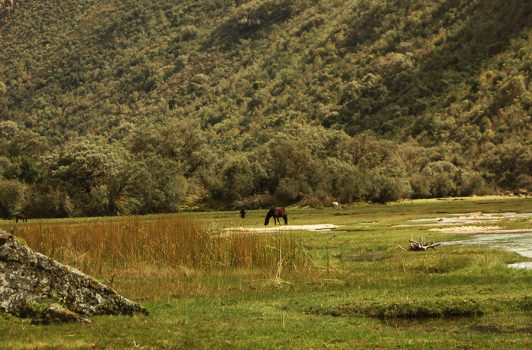 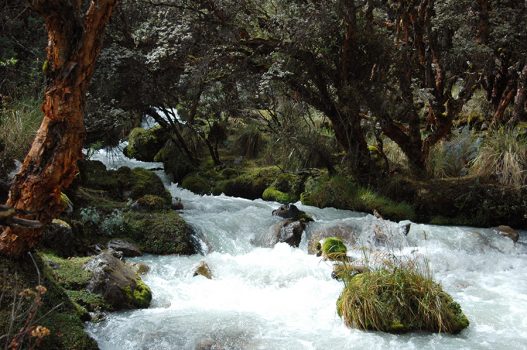 Of the treks, the classic Cordillera Blanca Santa Cruz trek route is one of the most popular in the Cordillera Blanca. The three or four-day trek in the protected Huascaran Reserve is a great introduction to the region of Huaraz and gives travelers a glimpse of the stunning beauty of the Cordillera Blanca with its snowcapped mountains, lagoons and forests. The trek can begin or end in one of two towns, Vaquería and Cashapampa. Traditionally it begins in Cashapampa and ends in Vaquería, but for those doing the trek in three days, beginning in Cashapampa is more strenuous as more of the route is uphill.

A friend and I recently traveled to Huaraz to get a much-needed dose of nature and change of scenery from Lima’s cityscapes. We spent three days in the city to acclimatize with a few day treks before doing the Santa Cruz Trek in three days, beginning in Vaquería.

We were collected from our hotel at 6am and traveled about five hours to Vaquería, stopping on the way at Portachuelo Pass (4,760m/15,616ft), a lookout point over the Llanganuco Valley where the glacial lakes, Orcococha and Llanganuco lie surrounded by snowcapped peaks. When we arrived in Vaquería, the donkey driver trekking with us loaded up his three donkeys with our gear, and we got our packed lunch to take for our trek that afternoon.

We began descending on a path that took us through villages of humble, adobe homes, where we encountered locals going about their daily tasks, sometimes stopping to observe us pass or to offer a friendly nod. We saw pigs with their piglets resting in the sun and horses roaming freely out to pasture with the occasional cluster of lanky cows grazing among them. As we neared the first camp, we entered a forest of quenuales, high-altitude trees with orange, flaky bark and twisted limbs that grow as if they’d spent their lives being bowled over by strong winds.

When we arrived at camp, everything was already set up by the donkey driver. We dropped our day packs in our tent, changed into dry clothes and had mate de coca to warm up and to help with the altitude. Later, we ate a filling, hot dinner before star gazing and finally retiring to rest for the night.

Our guide woke us early with mate de coca to chase away the morning chill, and we got ready, packed our stuff and ate breakfast before setting out. As we increased in altitude, the landscape became more rugged—rocky and wet with patches of ichu grass, boulders scattered about and persistent clouds that rained lightly over us as we ascended. As we headed to the steepest part of the pass, we scrambled up large, flat stones at sharp angles and passed several small lagoons that were dark green from the algae in the water. Near the top, we paused to catch our breath and watch an eagle soaring gracefully overhead as it circled the carcass of a cow on the mountainside.

Finally, we made it to Punta Union (4750m/15,583ft), which is one of the highlights of the Santa Cruz Trek because of the impressive vista it offers (and the fact that you know that the hardest climb is now behind you). We snapped some pictures and enjoyed a well-earned rest while we ate lunch, looking over the Santa Cruz Valley and the tributaries of the Santa River that fan across the valley floor. We took in views of the white-tipped Paria, Taulliraju, Artesonraju and Huaripampa mountains, and we watched as a large group of donkeys and their drivers passed us and headed down the mountain.

As we descended, some of the clouds lifted and allowed the sun to break through. Unfortunately, the clouds did not allow us a clear view of the Alpamayo mountain, which was voted by a group of international mountaineers as the most beautiful mountain in the world for its four smooth faces that make a near-perfect pyramid. However, that just means that I have another reason to return to Huaraz to catch a glimpse of the peak!

When we arrived at camp, we found more mate de coca awaiting us and a yummy snack, which we ate thankfully as we rested our tired legs in the lingering sun of the late afternoon. We enjoyed another tasty meal in the warmth of the tent and then we went to bed early to recharge for our last day of trekking.

We woke up with clear skies on the last day of our trek and set out after breakfast through the Santa Cruz Valley. Once a valley of green grass and vegetation, it is now sandy and dry with boulders scattered about after a massive landslide in 2012 destroyed much of the valley and redirected the Santa River. Small streams cutting across the valley floor show promise that it will return to its previous state in the future.

As we trekked along the mostly flat trail, we saw more quenuales and many horses, cows and donkeys out to pasture. We passed a turquoise lagoon and continued following a path that ran along the Santa River with the Santa Cruz mountain always watching over us as we trekked.

On our way we encountered many trekkers going in the opposite direction, having begun in Cashapampa, where we were headed. After about 4 hours or so, we took a break for lunch by the river bank before tackling the steepest descent of our journey, which was challenging because of loose stones and tight, narrow switchbacks along the mountain edge. Finally, we arrived in Cashapampa and enjoyed a celebratory beer as we waited for our transport to Huaraz.

Trekking options in Huaraz are ample and spectacular, but the region lacks basic infrastructure. For now, the area is reminiscent of Cusco before tourism took off there, still geared towards backpackers and dominated by budget lodging options. Charming lodges like Lazy Dog, Cuesta Serena and Llanganuco are raising the standards for accommodation and service in Huaraz and provide great bases to enjoy day hikes in the area – without the need to camp.

Inka Trek to Choquequirao Located on a mountain spur, overlooking the Apurimac river on south and the vertical slopes of the Vilcabamba range to the north and east, Inca Choque...
Inca Trail Alternatives: Ancascocha Trek In this story we want to explain Inca Trail alternatives we have explored. A way to tell you our adventure firsthand. Let's go! One of the great jo...
A Short Sacred Valley Hike Off the Beaten Path The Sacred Valley of the Incas is a paradise for all types of travelers - but no matter what you love to do, I highly recommend you take one day durin...
Lodge-to-Lodge Salkantay Trek While in the Cusco region, I recently took the opportunity to hike the Lodge-to-Lodge Salkantay trek, a fantastic 6 day trek to Machu Picchu that sees...
Canocota Canyon Colca Peru Hike As one of the lucky countries with the Andes decorating its landscapes, Peru is rich in hiking and climbing opportunities for adventure travelers. But...
Hike to Laguna 69 in the Cordillera Blanca This was my first hiking trip in Peru, and what a place to start! The hike to Laguna 69 was one of the top on my peru adventure travel bucket-list. Th...
Tags: Cordillera Blanca Huaraz Luxury trekking in Peru peru trekking Trekking in Peru
Previous postMATE Exhibit Legends in Light by George Hurrell
Next postThe Khipu Blog