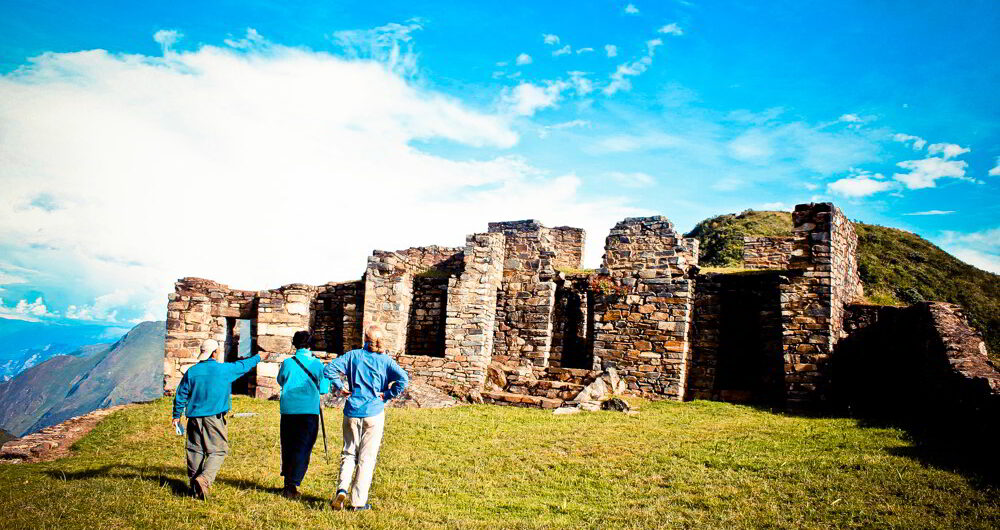 It was considered for a century and a half to be «the Lost city of the Incas» a term applied now to Machu Picchu. In fact the likenesses to Machu Picchu are many: much like Machu Picchu it is located on a mountain outcrop overlooking a raging river, Machu Picchu the Urubamba, and Choquequirao the Apurimac. Machu Picchu was probably a sacred place or estate of Inca Pachacutec, and Choquequirao was certainly a place of worship….and each of them are located at opposite sides of Nevado Salcantay (6264m) one of the holiest mountains in the region. Choquequirao is one of the top peru treks in the country for adventurous travellers and an spectacular alternative well worth considering if you’re not doing the inca trail trek.

Choquequirao is located 40 kms south west of Machu Picchu as the condor flies: but the mighty peaks of Soray (5428m), Salcantay (6264m) and Yanama (5347m) lie between the two, making access an arduous task.This nightmarish route was taken by the earliest known visitors to the site: French explorer Eugene Sartigues (1834), the French consul in Lima Leonce Angrand (1847), and the great Peruvian artist and cartographer Antonio Raimondi (1867). The earliest known accounts about Choquequirao date to the XVIII century (1710) when prospector Juan Arias Diaz Topete reported three expeditions into a country between the Apurimac and Urubamba rivers during which he found «four ancient towns of heathen times, wholly uninhabited, one named Chuquiquirao which in the Inca language means gold cradle.

The site as we know it today consists of four main sections: the Curved Terraces, the Lower plaza, he Upper Plaza, and the Truncated hilltop. On accessing the site from the South (Apurimac gorge) the visitor will first encounter the beautifully curved terraces and the Lower Plaza perched above it. It is at the Lower Plaza that most of the buildings are found, forming the «apparent high status sector of the site»1. There is a large hall, three two-storey buildings, a large plaza and several other lesser buildings. The presence of numerous double-jambed doorways suggests the high status of the sector.

The stonework found in Choquequirao is not as fine as that found in some sections of Machu Picchu. Scholars attribute that feature to the quality of the stone available as opposed to evidence of low status. The other sections boast more buildings with double jambed entrance gateways, an enigmatic series of terraces resembling a «giant staircase» and a complex water system. In addition to these four groups, there are other sections of the ruins, a bit further afield such as the Ridge Group and Capuliyoc both below the Curved Terraces. The Ridge Group alone contains as many buildings as the Upper and Lower Plazas combined

Mountain Biking Sacred Valley: Adventure in the Andes I visited Cusco and its surrounding areas for the first time in November with my friend from college. Like many travelers, we immediately fell in love...
10 Thrilling Experiences For Families In Peru Peru with kids is its own special kind of experience. There’s nothing quite like seeing a new place through the eyes of your kids, and if you’re an ad...
How to Manage Altitude Sickness in Peru Dream vacations can be derailed by unexpected illnesses. From questionable water to pesky mosquitoes, the new stresses of unfamiliar locations can lea...
Our Travel Hotlist for 2022 At the turn of every new year, the team here at Aracari dedicate hours to curating their travel hotlist for the year ahead. Using our insider knowledg...
The Moche Route and Chicama Surf Resort Highlights of Northern Peru: The Moche Route & Chicama Resort This guest blog article was written by Liam Browne and Piotr Piecha, who travelled ...
The Real Sacred Valley: Cultural Peru Hike During a trip to the Sacred Valley of Peru, I had the chance to participate in an unforgettable day hiking through remote mountains, visiting little-k...
Tags: adventure travel peru alternative hike to machu picchu Luxury trekking in Peru peru luxury trekking peru trekking Trekking Trekking in Peru
Next postChoquequirao, The Other Machu Picchu