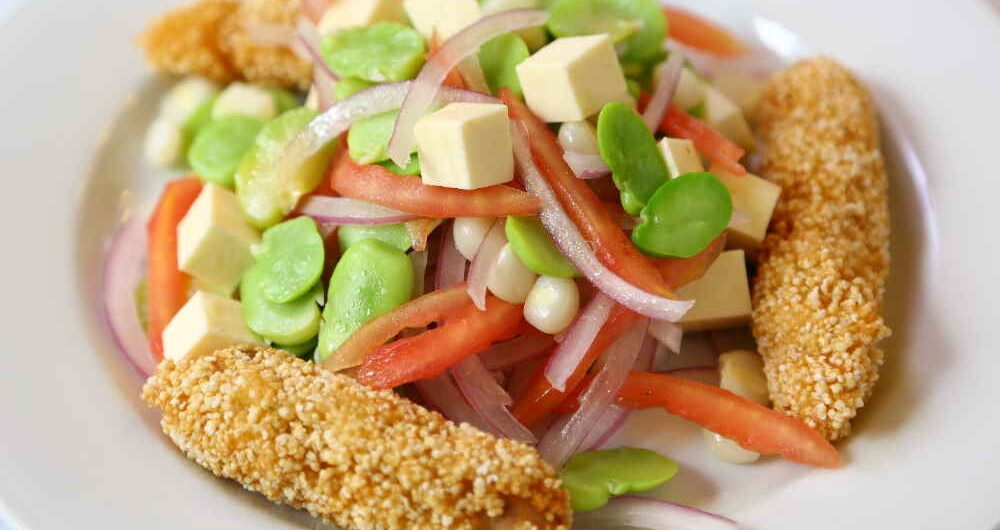 This month, Aracari’s special gastronomic advisor Maria Julia Raffo has kindly shared with us the details of five dishes Peruvians love to make in summertime.  “Why not use what remains of the summer to bring some Peruvian inspiration into your kitchen” says Maria, whose insight into Peruvian gastronomy and connections to the restaurant scene have created some of the most memorable culinary experiences for Aracari travelers over the last twenty years.

Perfect for a light supper, picnic, or BBQ, we’re delighted that Maria will be demonstrating how to prepare each of these dishes in a live stream on Aracari’s Instagram channel over the coming months. You can join Maria’s first culinary demonstration on Sunday 13th September over at @aracaritravel – we’ll keep you updated with the full method and list of ingredients you’ll need to take part on our blog and newsletter.

The dish from Arequipa, whose name translates as ‘unmarried’ or ‘single’, because it was once only eaten by bachelors. Chef Martin Morales suggests a salad like this is light but filling and has traditionally helped “loveless bachelors to stay svelte while each one searched for a wife.”

So, how do you make Solterito? Quite simply the salad is a mix of broad beans, tomato, corn, salad onions, cottage cheese, and botija olives dressed in a mildly spicy vinaigrette made from Causa de Alcachofa de Jerusalén (Rocoto peppers). Bursting with flavour, and very colorful to look at, Solterito is the perfect recipe for the hottest of summer days, and when the sun is shining. 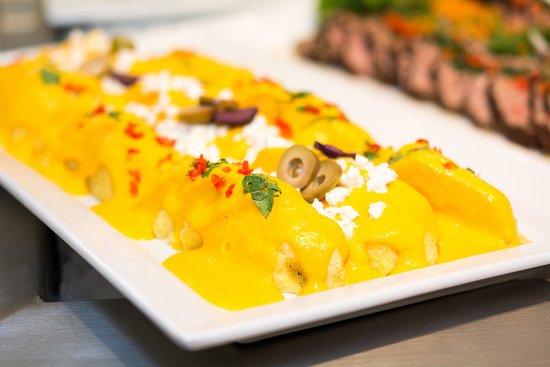 High in the Andes is the magnificent city of Huancayo, where the dish known as Papa a la Huancai­na (Huancayo style potatoes) originates.

This dish simply requires you to boil potatoes and dress them with Huancayo sauce, which is made from cheese and Ají amarillo chili (yellow chili paste). Huancayo style potatoes are famous across Peru for their bright, sunshine yellow color. If you want to make even more of a visual impact upon your guests, then we recommend dressing the sauce over purple potatoes for a modernist take on this classic dish.

Working in the mountains is hard work and as such, the cuisine is typically hearty, filling, and flavorsome. If potatoes feel a bit too heavy, then you’re in luck because Huancai­na sauce is popular across the region as a dip for crudites, quail eggs, corn, and fried yucca. The perfect accompaniment for a selection of lighter nibbles, whilst the BBQ grill heats up.

Take a peek at the ingredients you’ll need to prepare Papa a la Huancaina from home, as part of our live Instagram demonstration on Sunday 13th September. 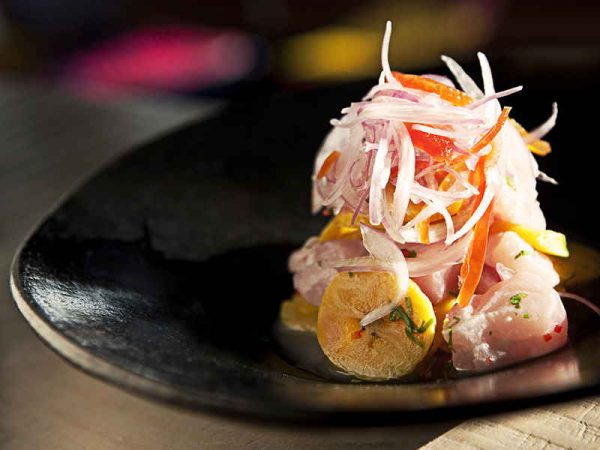 You can’t leave Peru without trying ceviche. A dish that has spread internationally, due to the proximity of its origins to the port of Lima, which originally made the recipe easy to export across the Spanish empire. Bright, full of exotic colors, both juicy and tantalizing in the mouth – what more could you want from the perfect summer recipe.

Lima and the north coast is where you’ll find some of the best Ceviche. Taking raw fish, shellfish, or a combination of the two, the ingredients are “cooked” by marinating them in a citrus dressing usually consisting of lime, cilantro, aji amarillo (spicy yellow chili pepper) and red onion. When you order Ceviche from a restaurant, it’s common for tender pieces of sweet potato and choclo (a local variety of corn with giant kernels) to be mixed in with the fish to create a delightful variety of flavors and texture in the mouth.

Ceviche doesn’t take more than a few minutes to make. If you’re attempting to make this quintessential Limeño recipe at home, the key to success is to use the freshest fish possible. Start here and you won’t go wrong. 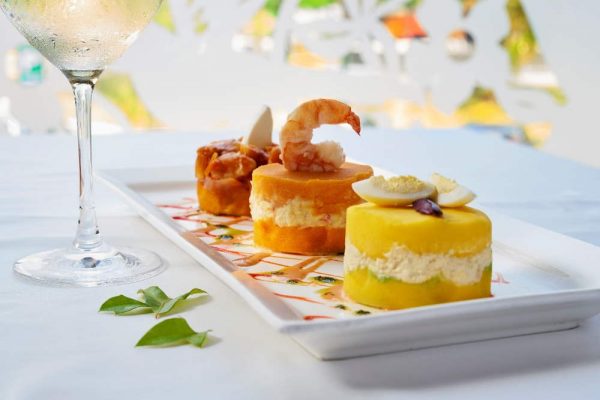 Peru is the home of the potato, and so it makes sense we’ve included more than one potato dish on our list of five Peruvian summer dishes. Causa is one of those recipes, which varies according to each region you visit. Every household in Peru probably has its version of this dish, which is most popular in Peru’s capital, Lima.

Fundamentally, Causa is a series of neatly stacked layers of different foods. The first layer of the stack usually includes delicate flakes of fresh Tuna fish or shredded chicken, then finely diced avocado, and finally thinly sliced vegetables such as tomato, corn, onion, and pepper. Wonderfully light potato cakes will be inserted between each of these layers and finally, the dish will be dressed with a vibrant array of citrus dressings and mouth-tingling garnishes.

Causa is a Limeño classic, that’s great to share amongst friends as an appetizer or small individual plate.

Tiradito is a recipe reflecting the melting pot of cultures that have shaped Peru’s cuisine. To Peruvians, tiradito is perceived as a more sophisticated take of ceviche, developed by Japanese migrants to Peru in the 1970s.

The Japanese-Peruvian chefs who developed Tiradito essentially take the same raw fish or shellfish that would otherwise be used in Ceviche, but slice rather than dice the ingredient, in a style much more akin to Japanese sashimi. Unlike Ceviche, Tiradito isn’t cured before serving, but it is dressed in a similar spicy-citrus marinade known as Leche de tigre (tiger’s milk). There are numerous variations on Leche de tigre, but most recipes call for the inclusion of lime juice and ají amarillo (yellow) peppers, which have a unique aroma and spicy kick.

If you’re looking to impress your guests not only your culinary skills but knowledge of Peruvian-Japanese cuisine, then this is the fish for you.

Don’t forget to tune into to our Instagram channel on Sunday 13th September for a live demonstration of the recipe, Papa a la Huancaina, by Aracari’s gastronomic advisor, Maria Julia Raffo. Over the next months she’s going to share with you exactly how to prepare these famous Peruvian summer dishes. If you would like to join in the fun from home, keep an eye on our newsletter and blog to stay updated with what ingredients to buy ahead of time. In the meantime, travel and gastronomy lovers might like to take look at our Peru Food Guide for a comprehensive look at what not to miss on a culinary tour of Peru.

The Best Restaurants Arequipa Peru is the food mecca of South America, proudly laying claim to a selection of the best restaurants in the world and the #1 restaurant in Latin Ameri...
Sweet Lima. The best Peruvian desserts Lima is one of the great gastronomic cities of the world, drawing food-loving travelers from far and wide. Thanks to Lima’s award-winning chefs and wo...
Moments that Made Aracari: celebrating our 25th birthday Longevity. In today’s competitive climate, longevity is a hard commodity to come by for a business, particularly a travel company – when with each pas...
Take an Andean Tea Break Aracari prides itself on offering the most exclusive experiences that we can for our guests. We create one-off, completely tailormade moments that sui...
Peruvian Recipe: Ceviche The national dish of Peru is, without doubt, the spicy marinated fish dish that is Ceviche! As diverse as the peoples of Peru, Ceviche can be prepared...
The Chef’s Cusco Food Tour Aracari's head of marketing Caroline, tests out a new culinary experience for our guests, tasting her way through the streets of Cusco and learning mo...
Tags: ceviche culinary travel Papa a la Huaancaina Peruvian food Peruvian Recipes Recipes Solterito
Previous postThe Ultimate Peruvian Road Trip
Next post“Food Is Life, Life Is Food”